Three migrant labourers and an infant girl were killed, while 46 others suffered injuries in two road accidents when they were returning home in Uttar Pradesh from other states during the coronavirus-induced lockdown, officials said on Wednesday. A truck carrying a group of 54 migrant labourers and their families from Ahmedabad in Gujarat to Balrampur in Uttar Pradesh rammed into a stationary truck near Lalpur police post on Kanpur-Jhansi highway, killing three people and injuring 43 others.

Superintendent of Police (Kanpur Dehat) Anurag Vats said, "The deceased persons have been identified as Rohit, 25, Hiraman, 50, and Sumaiyya, 2, all residents of Balrampur."

The injured have been admitted to the district hospital, he said, adding that eight of them are critical and have been referred to Lala Lajpat Rai (LLR) Hospital, Kanpur.

Uttar Pradesh Chief Minister Yogi Adityanath expressed grief over the loss of lives in the accident.

In a statement issued in Lucknow, he instructed officials to ensure that those injured get proper treatment.

In another incident in Chitrakoot, a migrant labourer returning home in Uttar Pradesh from Chhattisgarh on a bicycle was killed after being hit by a truck, the police said.

Mohan, 44, a resident of Saharanpur, was returning home along with three others on Tuesday evening when the accident took place, they said.

The labourers had stopped on the roadside near Kalchiha village in Chitrakoot to take rest when they were hit by the speeding truck, the police said.

All four were injured in the accident and taken to a community health centre in Mau village, where Mohan died.

The truck has been impounded and its driver arrested, the police said.

The workers, who hail from Saharanpur and Muzaffarnagar districts, were working at a jaggery factory in Chhattisgarh's Raipur.

The factory was closed due to the lockdown enforced to check the spread of the novel coronavirus. 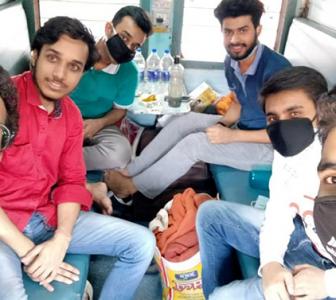