Why migrants cycle hundreds of kms to reach home

'We live in slums in Mumbai. We have to use public toilets, and we were afraid we will catch virus if stayed on'

'Traveling by a truck packed with people will cost me over Rs 3,500, the bus journey will cost twice as much. And I have only Rs 700 in my pocket' 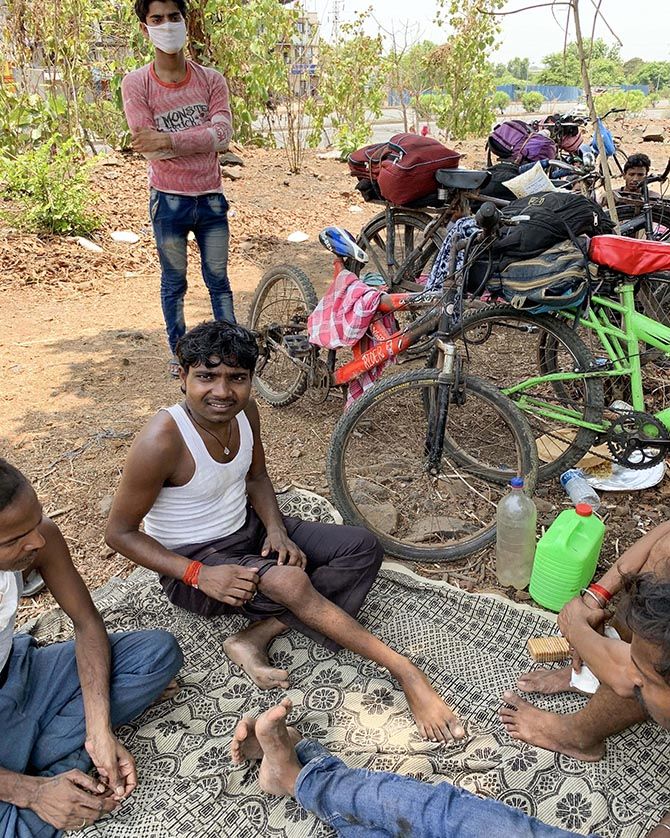 IMAGE: Ramjeevan Nishad, 27, shows his polio-affected leg, as he takes rest under a tree along with other migrants, while cycling from Mumbai to their native place Gorakhpur amid ongoing COVID-19 lockdown. Photograph: PTI Photo

There are very few trees to offer shade in the scorching summer along the stretch of Mumbai-Agra national highway as it passes through Maharashtra's Thane district, north of Mumbai.

On this road, thousands of migrants are on the move, many of them on bicycles, hoping to pedal their way as far as Gorakhpur in Uttar Pradesh or Kalahandi in Odisha.

All they want is to leave Mumbai which has become the biggest coronavirus hotspot in the country.

When lockdown was extended for the first time, a lot of migrant workers simply started walking to their home states.

But in the last two days, as I and another journalist friend travelled from Thane to Igatpuri in Nashik district, we saw more and more migrants on bicycles.

We see a group of cyclists resting by roadside.

As we ask them questions, one man rolls up his trousers.

One of his legs is damaged by polio, he points out.

With only one good leg, Ramjeevan Nishad, 27, has already cycled over 80 km since he left Nallasopara, a suburb of Mumbai, to reach Vasind.

He is part of a group of dozen whose destination is Gorakhpur, 1,600 km away.

But the immediate challenge is to climb the 14-km ghat section from Kasara, with altitude gain of 1,000 feet, to reach Igatpuri.

"Traveling by a truck packed with people will cost me over Rs 3,500, bus journey will cost twice as much. And I have only Rs 700 in my pocket," Nishad says.

After five weeks of lockdown, their patience ran out and so did the money, which forced them to leave Mumbai on bicycles.

But even bicycles do not come free.

Many of them did not possess one, and shelled out upto Rs 5,000 apiece on new bicycles.

A second-hand bicycle costs less, but could be more prone to break-downs.

While talking to them, I do not notice any bitterness or anger.

But there is fear.

"We live in slums in Mumbai. We have to use public toilet, and we were afraid we will catch virus if stayed on," one cyclist says.

Most of them do blue-collar jobs, from construction labour to carpentry, and until now dutifully remitted their savings back to families in Uttar Pradesh, Jharkhand, Odisha or Madhya Pradesh.

Some show fitness certificates obtained from doctors in hope that they may get a berth on special trains taking migrants back home, but with no luck.

"With the money I spent to get this certificate I could have bought two or three meals," one man says.

Two people from a group headed for Kalahandi say earlier they sent money home, but last week they had to request their families to send them money to buy bicycles. It was difficult for them to get foodgrains from PDS shops in Mumbai as their ration cards were issued in their home states.

A little ahead of Vasind, we meet a 45-something couple on bicycle.

They are heading for Datia in MP.

The husband, who works as a construction labourer at Nallasopara, says , "Cycling is tiresome, but we have to go on."

His coy wife, riding pillion, refuses to join in the conversation. IMAGE: Migrants try to board a bus for some distance while cycling from Mumbai to their native place Gorakhpur, Uttar Pradesh, amid ongoing COVID-19 lockdown. Photograph: PTI Photo

These are tied to carriers.

They can not afford the panniers which long-distance cyclists use to carry their stuff.

A group from West Midnapore has tied umbrellas to the top bars of bicycles, to act as moving parasols.

Mobile phones are switched off, because batteries need to be conserved.

Most of them do not know how to use Google Maps, and they have never traveled to their states by road.

A 40-something man headed to Prayagraj in UP asks me, "What is the name of this place?" He does not know where he has reached and how far he has to go.

"I started cycling from Mumbai last night. Police hit me with lathis near Thane but I sped away. I was alone, but now I have made friends with a group from Jharkhand," he says.

Soon, his new-found friends catch up and they all make a dash.

All cyclist migrants are optimistic about making it home, including Nishad, the polio survivor, whose mates are confident of covering 120-130 km a day once in the plains.

There are a lot of shuttered dhabas with open shacks.

Dhabas do not offer food at the moment, but cyclists can shelter there during the day before they hit the road again at night.

As to the food, local people often help.

We meet a group which is walking to Satna, MP.

One of them is singing a ditty: "Namak roti khayenge, Mumbai nahin aayenge!" (We would survive on the humblest of food but will not return to Mumbai).

Some of them wonder if Mumbai, city of opportunities and possibilities, will ever be the same post-pandemic.

But a cyclist headed for Badaun in UP says, "There are no jobs back home either. Once the pandemic is over, we will have to return."

They will probably have to isolate themselves for two weeks after reaching their villages.

A man from Madhubani in Bihar says, "It is mango season in the village now. As kids, we used to play in orchards all day. Now we will spend nights there as well."

On the highway, we also see hundreds of auto rickshaws, all heading north.

A rickshaw owner headed for Hardoi in UP with three family members explains the arithmetic: It would cost around Rs 6,000 for fuel to drive 1,400 km. In Mumbai, there is no business and he has to pay Rs 40 per day as parking charges and also feed his family.

At the summit of Kasara hill, a pleasant surprise awaits.

The government has arranged a State Transport bus, to carry both migrants and their bicycles (to be tied on the roof). Buses will take them up to the border of Madhya Pradesh.

But what about east-bound migrants? Would they be taken up to far-away borders of eastern Maharashtra? There is no clarity.

Journalists can grill officials, but migrants are in no position to do that.

They will trudge on.