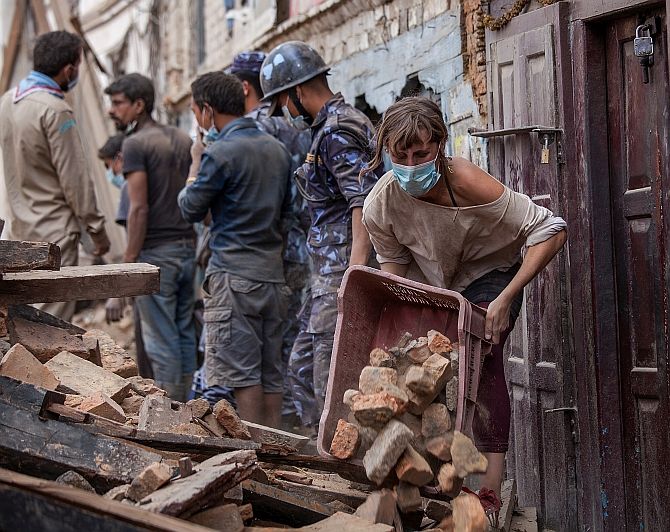 Rescue teams from India and 33 other countries were on Saturday asked by Nepal to leave as it prepared to launch massive operations to rehabilitate millions of uprooted victims of the devastating temblor that has killed at least 7,365 people, including 41 Indians.

The decision that also applies to India's National Disaster Response Force, which has the largest presence in Nepal, comes in the wake of criticism by Nepalese on social media over "glorification" of New Delhi's aid efforts by the Indian media.

Nepal's foreign ministry said the government has asked countries to remove their 'first response' teams as the focus now shifts to relief rather than rescue.

But it clarified to India that its decision to ask foreign rescue personnel to leave was not directed at it but encompassed all other 33 countries present in the Himalayan nation which was now moving into next phase--rehabilitation.

Underlining that his country was thankful to India for responding within ‘6-7’ hours and saving lives following the devastating earthquake, Nepal Ambassador Deep Kumar

Upadhyay indicated that India will remain engaged in the rehabilitation process.

He said that the Nepal army, police and other local organizations had expertise to handle the situation but lacked equipment. "We have to thank the Indian government since within 6-7 hours of time, a flight reached Kathmandu with all the necessary equipment. It helped many people survive," he said.

"As such, Nepal has asked all rescue teams from 34 nations to withdraw. They now need rubble removal equipment and have asked India for help, an army engineering team will be going," the ministry said.

Teams from Japan, Turkey, Ukraine, UK and Netherlands have already begun the process of leaving Nepal.

NDRF chief O P Singh said the reason behind the Nepalese government asking foreign rescue teams to leave is that the search operations have come to an end and there was very little chance of finding survivors from the debris.

Around 4,500 foreign rescue workers descended on the Himalayan nation following its worst disaster in over 80 years.

The widespread destruction has affected around 8 million of Nepal's 28 million population and the rescuers' departure would test the country's capabilities of handling the crisis through the remaining relief work and rehabilitation.

The Nepal police said the number of Indians killed in the quake has reached 41, who are among 57 foreigners killed.

At least 10 Indians were also among the injured.

India's youngest Everest summitteer Arjun Vajpai was also rescued from Makalu base camp and flown to Kathmandu. Vajpai has been rescued by Nepal Army team from the mountain area.

Prime Minister Sushil Koirala, who inspected Chautara area in one of the worst-hit districts Sindhupalchowk on Monday, directed officials to leave "no stone unturned" in efforts to save and rehabilitate the victims.

"Our country is technically not well-equipped in disaster management, even then, I request every official to leave no stone unturned as per our capacity," said Koirala.

Officials said nearly 100 bodies of trekkers and villagers were found buried in an avalanche set off by the quake.

Nepal experienced some seven small aftershocks on Monday, including one measuring 4.6 on the Richter scale with its epicentre in Sindhupalchowk, according to the National Seismological Centre.

Six other quakes below five on the Richter scale were recorded with their epicentre in Dolakha, Gorkha and Nuwakot districts, keeping people on edge, most of whom have been staying in the open battling bad weather and scarce food and water supplies.

However, there were no injuries or destruction reported from the quakes.

According to an official at NSC Nepal had suffered more than 138 aftershocks of more than 4 on the Richter scale since the powerful April 25 earthquake killed thousands.

Officials predict that the aftershocks may continue for more than a month.

Responding to a query, Koirala said that no Nepalis were left behind from the access of relief materials.

"The home where I live has also fully cracked, you can come and check. There is nothing than to accept tragedies caused by the earthquake.

The Cabinet endorsed Sunday's recommendation by the Central Natural Disaster Relief Committee to ask the foreign rescue workers to leave the country.

"Its more than eight days after the earthquake. The rescue teams have served their purpose and we are very thankful to them.

"The relief committee has recommended the government to thank these teams for the work they have done for Nepal so that they can exit the country. It is up to the government to take a call now," home ministry official Laxmi Prasad Dhakal had said.

The highest number of the dead has been recorded in the Sindhupalchowk which currently has soared to 2,838 while in Kathmandu, death toll has steadily rose to 1,202.

As many as 1,91,058 houses and 10,744 government buildings have been damaged completely by the powerful temblor, more than twice the number of households wrecked in the 1934's deadly temblor that has been the country's worst disaster of all times.

"A disaster of such magnitude would test the capacities of any government in the world," said EU's Commissioner for Humanitarian Aid and Crisis Management Christos Stylianides.

Finance Minister Ram Sharan Mahat has said the death toll in the country's worst disaster in over 80 years is expected to climb "much higher". Koirala himself had earlier said the toll might touch a 15,000-mark.

An Indian Air Force team rescued 22 Buddhist monks from a remote village of Gorkha district, the epicentre of the devastating quake. The monks were rescued by Indian Army helicopters from Hinang Gompa, according to Indian Embassy sources.

Nepal parties have agreed that all those interested in carrying out relief work in the country can start at once, without having to route the process through the government.

The UN urged Nepal to relax customs controls which it says are holding up deliveries of aid coming from countries around the world from reaching the survivors.

Nepal lifted import taxes on tarpaulins and tents on Friday but Dhakal said all goods arriving from abroad had to be inspected.

Aid agencies have warned that remote mountainous areas in the country have suffered "almost total devastation".