For some Union ministers, Rajasthan's crushing defeat is personal 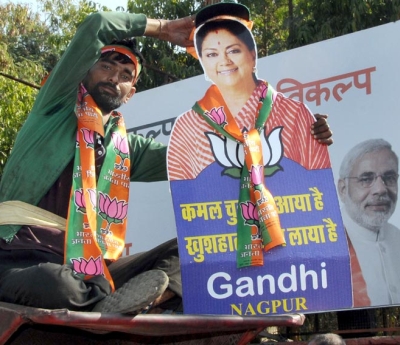 The BJP's victory in the desert state was so absolute that the Congress failed to open its electoral account in 17 of Rajasthan's 33 districts! P B Chandra reports.

The 2013 Rajasthan election has been a landmark for both the Bharatiya Janata Party and the Congress.

The BJP secured 162 seats in the Rajasthan assembly while the Congress suffered its worst-ever defeat in the state, winning just 21 seats.

This is the second time Vasundhara Raje, the BJP's chief ministerial candidate, has helped the party achieve a majority on its own in the assembly.

Even party patriarch Bhairon Singh Shekhawat, who went on to become India's vice president in 2002, could not achieve this feat.

Shekhawat had to seek the help of Independents to reach a simple majority and form the government in Rajasthan during his three stints as chief minister.

Raje -- a member of neighbouring Madhya Pradesh's Scindia royal family who married into the Dholpur royal family in 1971 -- was entrusted with the job of leading the BJP in the state barely ten months ago.

The BJP's victory was so absolute that the Congress failed to open its account in 17 of Rajasthan's 33 districts.

It could win only one seat in the districts of Alwar, Banswara, Barmer, Bharatpur, Bhilwara, Bundi, Churu, Jaipur, Jalore, Jhunjhunu, Jodhpur and Udaipur.

The Congress's agony was compounded in Jodhpur district, the bastion of outgoing chief minister Ashok Gehlot, where it won only one seat.

The results were also humiliating for Union Minister of State for Corporate Affairs Sachin Pilot, the Member of Parliament from Ajmer.

Not a single candidate from Pilot's party could win in Ajmer district.

Union Minister of State for Sports Jitendra Singh, a scion of the Alwar royal family and a Member of Parliament, received a similar drubbing. The Congress, in a pattern that is becoming familiar, won only one seat from the district.

Barmer and Jaisalmer, two districts located on the India-Pakistan border, witnessed a complete rout of the Congress.

Barmer boasts of a powerful Congress leader as its Member of Parliament -- Harish Choudhry, who is a secretary in the All India Congress Committee.

Even here, the Congress won only one seat.

The resounding defeat in Barmer is likely to hit the Congress harder.

The Congress government had announced the setting up of a Rs 37,000 crore (Rs 370 billion) refinery in Barmer district, hoping that the promise of infrastructural development and job opportunities would help woo locals.

The ambitious refinery turned out to be a non-factor in the polls.

Union Minister of Labour Sis Ram Ola's son Bijender was one of the rare victors from the Congress. Bijender Ola, a minister in the Gehlot government, retained his seat in Jhunjhunu district.

But Mandawa constituency, in the same district, turned out to be a political waterloo for the Congress. Dr Chandrabhan, president of the Pradesh Congress Committee, could not muster enough votes to even take the first runner-up position.

Another Union minister who failed miserably in Rajasthan's electoral battle was Minister of Housing and Urban Poverty Alleviation Girija Vyas.

The Congress drew a blank -- one of the many it now has on its record in Rajasthan -- in her constituency of Chittorgarh district.

Union Minister of State for Finance Namo Narayan Meena, who was elected from the twin seats of Sawaimadhopur and Tonk, could not win even a single assembly seat for his party in the two districts.

The Congress could not send even one Muslim representative to the assembly. The BJP, which fielded four Muslim candidates, saw two of them elected MLAs.

It was a major setback for the Congress which had 10 Muslim legislators in the last assembly.

Health Minister A A Khan Duru Miyan, who hails from the royal family of Loharu, was one of them. He contested, and lost, from Tizara constituency in Alwar district.

Nassem Akhtar, another minister in the state government, lost from Pushkar.

But when Narendra Modi, the BJP's prime ministerial candidate, started his campaign in the state with 20 poll rallies, he turned local issues into non-issues.

Neither Sonia Gandhi nor Rahul Gandhi, the Congress's star campaigners in the state, could match up to Modi.

In spite of introducing several populist schemes, the Gehlot government could not reap much political dividend, as they had been introduced barely six months before the election and could not be implemented to their full extent.

The Congress also suffered at the hands of the Rashtriya Janata Party, floated by BJP rebel Kirori Lal Meena.

In the 2008 assembly election, Meena's RJP had dented the BJP voter base in constituencies reserved for scheduled tribes. This time, the party caused substantial damage to the Congress.

Meena had expected to win between 12 and 15 seats, but the RJP won four seats; two of them were won by the RJP chief and his wife Golma Devi, a minister in the Gehlot government who resigned last year.

Another major factor in the election was the distribution of tickets based on the caste of the candidates.

Both the Congress and BJP were guilty of giving out tickets on caste considerations. The BJP evidently did a better job, as most of its candidates beat their rivals, who were from the same caste.

The Congress suffered serious losses in reserved constituencies, with both the BJP and RJP eating into its scheduled caste and scheduled tribe vote bank.

The BJP, which had lost out on support from the tribal communities in the 2008 election, regained some of that, with four districts dominated by scheduled tribes opting to vote for the party.

With such a massive mandate, the BJP will find the going easy in the Lok Sabha election next summer. It hopes to make a clean sweep, much like the Congress did in the 2009 general election. 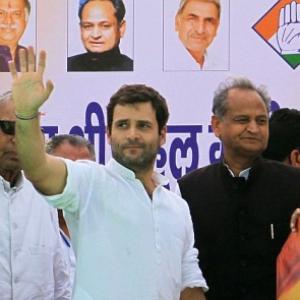 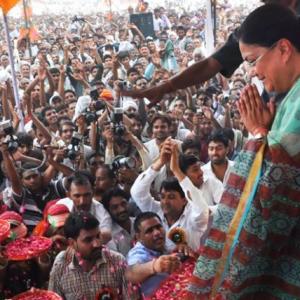