The ruling Trinamool Congress in West Bengal was on Friday rocked by a fresh bout of desertions as former minister Rajib Banerjee quit the party and several other leaders rallied behind him, deepening the crisis in the party. The desertions took place just hours before the scheduled arrival of Union Home Minister Amit Shah on a two-day visit (which was later postponed) to the state fuelling speculations that he may join the saffron camp ahead of the state election.

After quitting the Mamata Banerjee cabinet, Rajib Banerjee on Friday resigned from the party and as MLA of the West Bengal Assembly.

A slew of disgruntled TMC leaders, including some MLAs such as Prabir Ghosal and Baishali Dalmiya, who was recently expelled from the party and former Howrah Mayor Rathin Chakraborty, spoke out against the TMC leadership.

Rajib Banerjee, the former forest minister who represented the Domjur seat, visited the state assembly in the morning and submitted his resignation to Speaker Biman Banerjee.

"I have resigned as MLA of the state assembly. I have submitted my resignation letter to the speaker. I thank TMC supremo Mamata Banerjee for providing me with an opportunity to serve the masses," he said.

"I will continue to serve the people of my constituency in the days to come," he added.

Later in the evening he sent his resignation from the primary membership of the party to TMC supremo and West Bengal Chief Minister Mamata Banerjee and thanked her for providing him with the platform.

"Mamata Banerjee is like a mother figure to me. I am indebted to her for providing me with this platform ... This is an emotional moment for me," he said.

Incidentally Shah was scheduled to address a rally in Rajib Banerjee's home district Howrah on January 31.

Shah has postponed his visit amid farmers' protest at Delhi's borders.

Sources did not give the reason for the deferment of his trip during which he was to address two rallies on Saturday and Sunday, but it comes as farmers have intensified their protests against three farm laws amid incidents of clashes with 'locals' at some places.

Rajib Banerjee had joined the growing list of dissenters who have put the ruling camp in a tight spot ahead of the assembly elections when he last week put in his papers as the cabinet minister.

He had said he was forced to take the decision after being publicly humiliated by a section of the party's leaders for airing his grievances over their style of functioning.

He is the third minister to quit the state cabinet in the last two months after Suvendu Adhikari, who crossed over to BJP.

The second minister to quit was Laxmi Ratan Shukla, who expressed his desire to quit politics.

According to TMC sources, he had been having differences over various issues with the TMC district chairman of Howrah and state minister Arup Roy.

Meanwhile, former Howrah mayor and TMC leader Rathin Chakraborty, who recently spoke out against the leadership, said he will be at Shah's rally in Howrah on Sunday.

"Those who want to work for the people are not allowed to work in the TMC. We had informed the party leadership but it has yielded no result," Chakraborty said.

Ghosal neither confirmed nor denied the speculations over his probable switch over to the BJP.

"I am not saying anything today. All of you will get to see what happens in the next few days," he said.

Reacting to Banerjee quitting the party, senior TMC leader Firhad Hakim said, "Rajib should clarify what took him so long to resign and that too ahead of the polls."

"If he has quit for personal reasons, I have nothing to say. But if he has quit to joine BJP, why did he wait so long. He should have resigned two years ago. This only show their true colours," Hakim, also senior minister, said.

An elated BJP said the 'beginning of the end of the TMC has already begun' and the party would disintegrate soon.

"It is only a matter of time before TMC disintegrates. Those who want to join in the fight against TMC should join us," state BJP president Dilip Ghosh said.

According to BJP sources who did not wish to be named, at least 15 leaders from various parties are likely to join the saffron party within the next few days.

Rajib Banerjee, a popular mass leader in Howrah, has influence in eight of the district's 16 assembly seats.

Elections to the 294-member assembly are likely to be held in April-May this year. 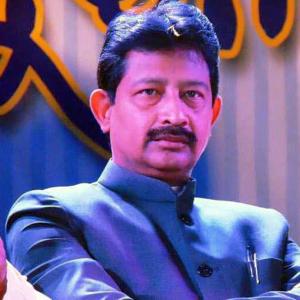