In yet another jolt for the Trinamool Congress dispensation, West Bengal forest minister Rajib Banerjee quit the Mamata Banerjee cabinet, joining the growing list of dissenters who have put the ruling camp in a tight spot ahead of the assembly elections. 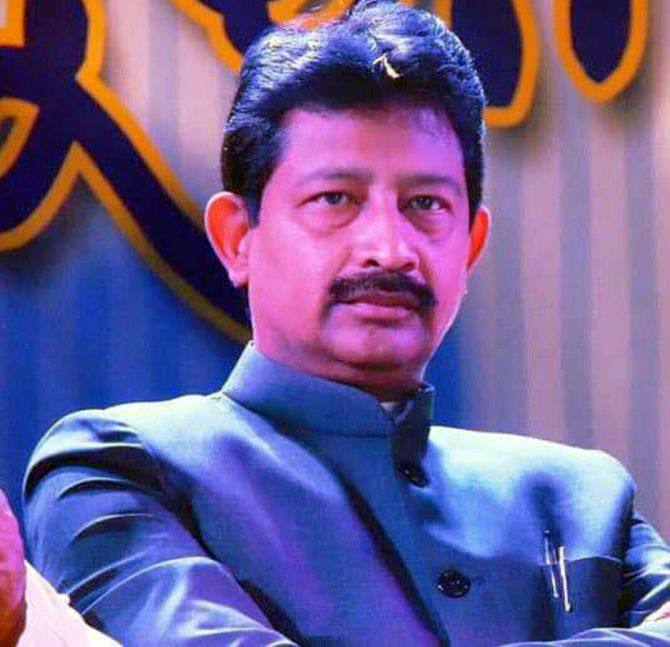 The TMC, however, asserted that Banerjee's move would have no impact on the party.

Banerjee, while talking to reporters, said he was forced to take this decision after being publicly humiliated by a section of the party's leaders for airing his grievances over their style of functioning.

He, however, declined to comment when asked if he plans to quit the party in the days to come.

"I had grievances against some of the party's senior members and informed the leadership about it. I also had a word with party supremo, but nothing happened. Instead, I was personally attacked by a section of leaders.

"I was hurt by the personal attacks. Hence, I resigned from the state cabinet," he said.

In his letter to the chief minister, however, the TMC MLA did not cite any reason for quitting the cabinet.

'It has been a great honour and privilege to serve the people of West Bengal. I heartily convey my gratitude for getting this opportunity,' he said in the letter.

The Domjur MLA also met Governor Jagdeep Dhankhar at Raj Bhavan after submitting his resignation, and held a meeting with him for an hour.

'Shri Rajib Banerjee, Minister for Forest Affairs @MamataOfficial called on me and handed over a letter of resignation from the Council of Ministers.

'He was indicated that steps by the constitution would be taken,' Dhankhar tweeted.

Incidentally, Banerjee had skipped the last five cabinet meetings, amid murmurs that he was trying to distance himself from the party leadership.

Sharing his resignation letter on Facebook, Banerjee said that he hopes that he will be able to continue to work for the people of the state in the days to come.

'I hope that in the years to come I will be able to be at each of your services in the best way possible as that has been the sole reason I am into politics,' he said in his post.

The TMC leadership, for the past one month, held several rounds of dialogue with Banerjee to address his grievances. State parliamentary affairs minister Partha Chatterjee and the party's poll strategist Prashant Kishor had met the leader and tried to pacify him.

The Domjur MLA features in the list of TMC legislators who have expressed discontentment over the state of affairs in the Mamata Banerjee camp.

Barring Laxmi Ratan Shukla, who quit his cabinet post citing apolitical reasons, most of them, including Banerjee's former cabinet colleague Suvendu Adhikari, have switched over to the Bharatiya Janata Party.

Reacting to the development, senior TMC Leader and MP Sougata Roy said if he had problems, he should have brought it up for discussion during cabinet meetings.

"We tried to address his grievances, but it seems he was adamant. He might have some other plans... it is for him to decide," Roy said.

Echoing him, senior TMC leader and minister Arup Roy, known to be a detractor of Banerjee in Howrah district, said he had apprehended that something like this would happen.

"When the TMC was formed in 1998, neither Laxmi Ratan Shukla nor Rajib Banerjee was in the party. I always knew such a situation was in the offing. People like him leaving the party hardly matters," he said.

Coming out in support of Banerjee, dissident TMC MLA Baishali Dalmiya said "honest and sincere people have no place in the party.

"Corrupt people are calling the shots in Howrah district. There is no place for the honest ones," he said.

An elated BJP said the 'beginning of the end of the TMC has already begun', and the party would disintegrate soon.

"It is only a matter of time before the TMC disintegrates. If he (Banerjee) wants to join us, we will look into it," state BJP president Dilip Ghosh said.

"Rajib Banerjee ji is a good leader and a successful minister. Honest and good people have no place in a party like the TMC," he said.

Vijayvargiya, however, refused to say anything when asked if Banerjee would join the saffron camp.

The TMC received its biggest jolt last month, during Union Home Minister Amit Shah's rally in Midnapore, when party heavyweight Adhikari and 34 other leaders, including five MLAs and an MP of the ruling camp, switched over to the BJP.

Since the 2019 Lok Sabha polls, when the BJP bagged 18 seats, just four less than the ruling TMC, and emerged as its challenger in Bengal, a TMC MP, 15 TMC MLAs, three legislators of the Communist Party of India-Marxist and four belonging to the Congress have switched over to the saffron camp.

However, none of them resigned as MLAs.

Elections to the 294-member assembly are likely to be held in April-May this year. 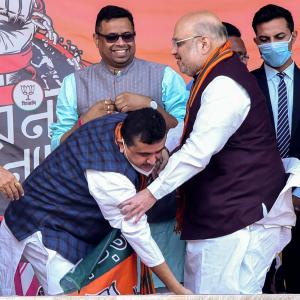