'The ground reality is that Banglar manush Didir shonge aachhe (The people of Bengal are with Didi).'
'Even as the BJP is still looking for a CM candidate, the elections will be over and we will form government with a two-thirds majority.' 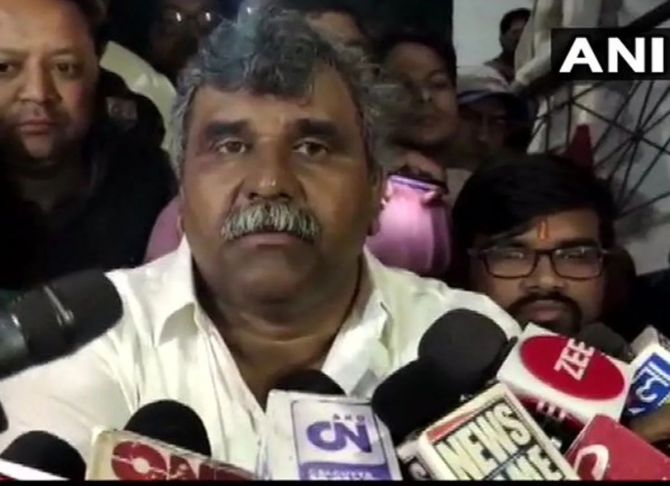 IMAGE: TMC MLA from Pandaveswar Jitendra Tiwari did a U-turn within 24 hours and rejoined the party. Photograph: ANI Photo

Trinamool Congress MLA Jitendra Tiwari, who had stated that he was not being allowed to work for the people and exited the party, returned to the party on Friday, ahead of Bharatiya Janata Party leader Amit Anilchandra Shah's weekend visit to Bengal.

"I am a proud son of Bengal, I respect this land and its people and I will never be with a party that belongs to outsiders," the MLA from Pandaveswar tells Swarupa Dutt/Rediff.com over the phone from Asansol in chaste, unaccented, Bengali.

Why did you do a U-turn and return to the TMC?

I was unhappy with certain issues not being resolved. I was disappointed and upset and I quit as chairman of the Board of Administrators of the Asansol Municipal Corporation on Thursday. But on Friday, the party (Trinamool Congress) promised to look into and resolve the issues, so I decided to withdraw my resignation.

What if the promise is not kept?

Mamata Banerjee's party has made the promise and it will be kept. I would not have returned otherwise. And I can always return to being a lawyer.

Did you speak to Chief Minister Mamata Banerjee?

Yes, on Friday. I called her and apologised and she told me to work for the party and focus my energies on winning the battle ahead and not get unnecessarily emotional. That is what I will do. I will follow what Didi says, she has been and always will be my leader.

When you quit your post from the Asansol Municipal Corporation and as a primary member of the party, what party were you considering moving to?

I did not quit to join another party and certainly not the Bharatiya Janata Party. I have never said that and neither did I make any moves towards the party. All these rumours that I would also be joining the BJP are unfounded.

You have just three months to prepare for the assembly polls. The BJP has said it will win 200 seats (in a 294-seat assembly) and is confident of doing so because it has unleashed its leaders on the state.
What is the TMC doing to counter it? Do you fear the BJP will form government in West Bengal or at least win with a much larger margin?

See, the reason why they have set up camp in West Bengal is because they are outsiders. They have no idea how things function in this state.

They are bringing their so-called big leaders to the state so that it gets national media attention, but they will not be successful.

The ground reality is that Banglar manush Didir shonge aachhe (The people of Bengal are with Didi). There is no question about it, the TMC will win the assembly elections.

Suvendhu Adhikari's move to the BJP has come as a big blow to the party. What is going wrong in the TMC?

He is not bigger than Didi, is he? Didi is there, isn't she? Yes, he grew to be a big leader under Didi's chhatrachhaya, her guidance, her patronage; only because of Didi.

He may have gone, but Didi is here, the essence, the core strength of the party is Didi, not anyone else. 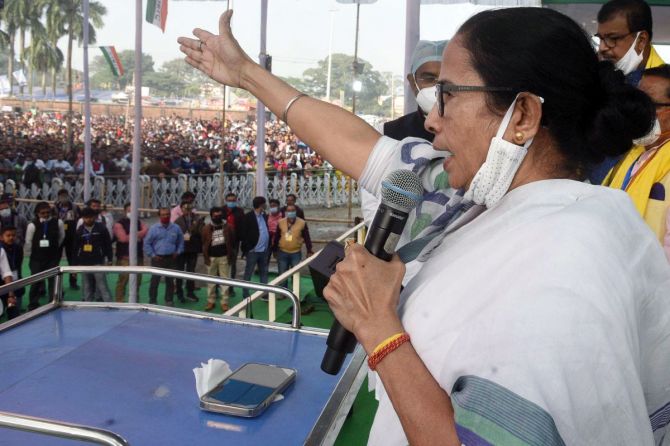 But Didi cannot fight the elections alone. She needs people and her partymen are leaving her.

Didi herself is an ideology. Her persona is all-encompassing. Sometimes it so happens that a person becomes an organisation.

Those who believe in her ideology are with her, those who don't have left us and it doesn't matter.

What is her ideology?

Her ideology is to take Bengal to the top of the world order economically. There is a path we are walking to fulfill that dream, that ideology.

You will realise, that all of Bengal will believe in this ideology because it promises personal, financial well-being.

Why would anyone who wants his family to prosper not vote for the TMC?

But can you deny that her own partymen are unhappy with her?

In other parties, are you saying that partymen are happy?

No. It's just that there is no democracy in those parties and even if they feel upset they can in no way express their feelings. They will be thrown out.

Mamata Banerjee withdrew security for Suvendu Adhikari the moment he expressed his feelings of disenchantment with the party. How are you democratic?

I am unaware of this. Please check what you are saying because Didi, like a true sister, always cares for us.

Mamata Banerjee has always blamed the 'outsider' factor for the BJP's in-roads into the state? Who is the outsider?

The outsider is the person who does not know, refuses to learn or understand Bengal and disrespects Bengal's culture.

Even if you are from outside the state, and are not a Bengali, but if you learn about Bengal, its people, its culture, its institutions, you will not be treated as an outsider.

Those who disrespect the great men and women of this state, like Ishwar Chandra Vidyasagar, if you play with Bengal's sentiments, you are an outsider.

Your surname, Tiwari, has this not been a stumbling block for you?

Because they cannot touch Mamata Banerjee they are looking at someone who is close to her. That is why Abhishek Banerjee is being targeted. But he is not the chief ministerial candidate, the candidate is Didi.

Come, fight a fair battle with Didi, but they can't. They can't even manage to target Abhishek, never mind Didi.

With three months left to the polls, they can't even manage to find a chief ministerial candidate.

Let me assure you, even as they are still looking for a CM candidate, the elections will be over and we will form government with a two-thirds majority. 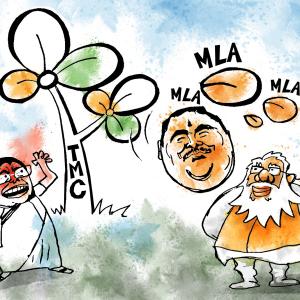 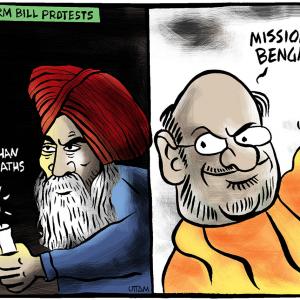