Farmer leaders on Monday said that emergency services will not be disturbed during Tuesday's 'Bharat bandh', and appealed to their affiliates to not force anyone to observe the shut down against the three recently enacted agriculture-related laws. 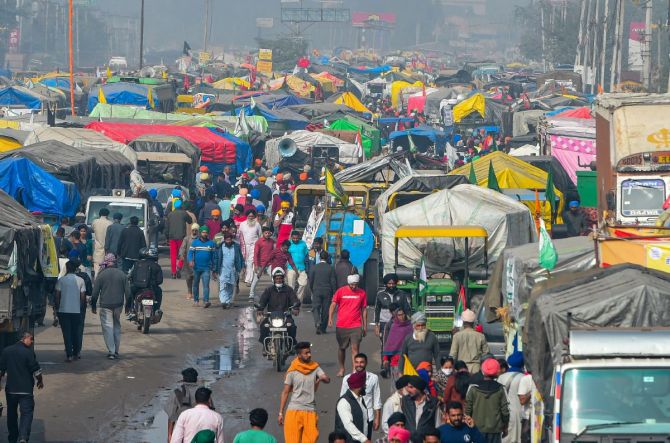 Addressing a press conference in New Delhi, farmer leader Balbir Singh Rajewal said the Centre will have to accept the farmers' demand of scrapping the new laws whose passage has sparked protests by thousands of farmers who have been camping at various border points of Delhi for the past 11 days.

The agitating farmers have already announced that they would occupy toll plazas between 11 am to 3 pm during the 'Bharat Bandh'.

Bhartiya Kisan Ekta Sangathan president Jagjit Singh Dallewala appealed to farmers to maintain peace and to not enter into any scuffle with anyone to enforce the bandh.

"People have been coming out in our support own their own. There is no need to force anyone to observe the bandh," he said.

"The 'chakka jam' will end at 3 pm, but the bandh will be observed through the entire day," he said.

The farmer leader said the 'bandh' will be effective across the country, but the major impact will be felt in Delhi, Uttar Pradesh, Punjab, Haryana, Madhya Pradesh and Karnataka.

"Emergency services, such as healthcare facilities and ambulances, and marriage processions will be allowed during the bandh," Dallewala said.

"The Modi government will have to accept our demands. We want nothing less than withdrawal of new farm laws," Rajewal asserted.

He said the Punjabi diaspora in Germany, Australia, the US and other countries will also support the bandh through symbolic protests.

Referring to the Centre's offer to amend the contentious laws, another farmer leader, Darshan Pal, asked as to why the government was agreeing to amend the laws now after initially claiming they will benefit the peasantry.

The protest has become a "material force" for the entire country, even for the Punjabi diaspora abroad, he said, and thanked all personalities and sportspersons who have returned their awards in their support.

All India Railwaymen's Federation's General Secretary Shiv Gopal Mishra said all its branches across the country will support the Bharat Bandh.

"The federation will give a call for a rail rook if the farmers' demands were not me he warned."

Communist Party of India leader Annie Raja said around 20 lakh members of the National Federation of Indian women across 28 states will participate in the bandh.

Thousands of farmers, mostly from Punjab, Haryana and Uttar Pradesh, are protesting at various border points of Delhi against the new farm laws. Several rounds of talks between the Centre and farmers have failed to break the deadlock.

The government has been defending the laws, saying they will help farmers by bringing in new technology and allow them to sell their produce at better prices.