News
Business
Movies
Sports
Cricket
Get Ahead
Money Tips
Shopping
Sign in  |  Create a Rediffmail account
Rediff.com  » News » Give farmers a face-saver to end the siege of Delhi

Finding itself trapped in a cul de sac, all things considered, a negotiated climbdown at this juncture seems the only sensible course available for the Centre, suggests Virendra Kapoor. The Punjab farmers's protest against the farm legislation poses a Hobson's choice for the Modi government.

Succumbing under pressure will jeopardise long overdue reforms, but failed to buy peace risks violence and disruption at a time the economy is struggling to recover from the pandemic-induced slowdown.

This is the biggest challenge Modi 2.0 has faced since its inception in May 2019.

How it defuses the situation is being keenly watched, particularly by a demoralised opposition. IMAGE: Farmers during the protest against the farm bills, December 5, 2020. Photograph: Adnan Abidi/Reuters

Briefly, the first law seeks to create one country, one market for farm produce, envisaging greater use of e-trading in agricultural commodities on a nationwide platform, ensuring better price for producers without middlemen cornering hefty commissions.

Farmers are free to sell to whoever they want at prices agreed between them and the buyer, with middlemen playing no role whatsoever.

The second seeks to give legal sanction to contract farming by private players.

Given the growing popularity of the e-market retailers in the food sector and expansion of food processing industries, sourcing of farm produce directly from the growers is bound to get a further boost, again expanding the options for growers for selling their crop.

The third law is a corollary of the second. Deleting cereals, pulses, potatoes, onions, etc from the list of essential items so that these can be bought in bulk without quantity limit and preserved in cold storage for longer periods to meet market demand.

Therefore, it is no surprise the three Acts have elicited universal endorsement of farm experts.

Ashok Gulati, the widely respected agricultural economist who has been pressing for this for decades, has whole-heartedly welcomed them.

So have several others with domain knowledge. Yet, multiple vested interests who stand to lose financially in case Indian agriculture were to break free from the stranglehold of the Agriculture Produce Market Committees have ganged up to oppose the far-reaching and long-overdue reforms. 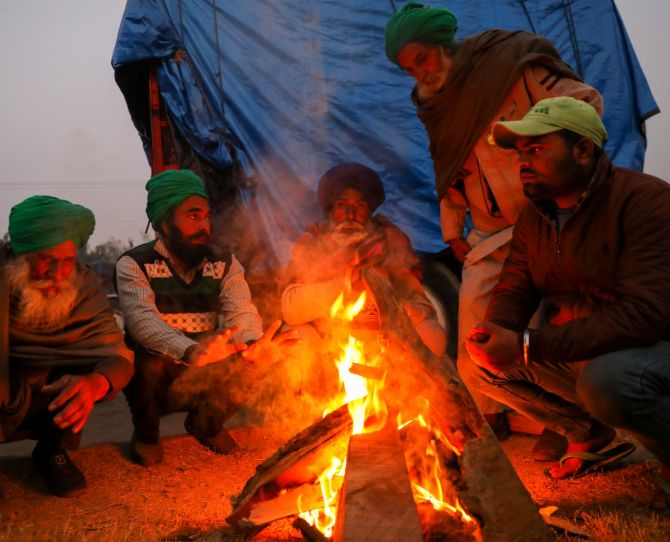 IMAGE: Farmers sit around a bonfire at the site of a protest, December 2, 2020. Photograph: Anushree Fadnavis/Reuters

However, now that the agitation has come knocking at the door of the national capital, the merits and demerits of the farm legislation have receded into the background.

The immediate problem is how to get the siege of Delhi lifted.

Finding itself trapped in a cul de sac, all things considered, a negotiated climbdown at this juncture seems the only sensible course available for the Centre.

The longer the siege of the capital continues, the greater is the danger of the misdirected agitation snowballing into a much bigger conflict.

Already, the truckers are threatening to join the stir. This may disrupt essential supplies nation-wide.

At present, 90 per cent of the farmers are from Punjab, but farmers from other states will likely feel obliged to show solidarity should there be a prolonged stalemate.

There is no mistaking that the desperate Opposition is not only misleading the farmers, but actively egging them to take a maximalist position in talks with the government.

The demand for repeal of the legislation by Parliament is clearly aimed at prolonging the stir since under no circumstances would the government concede it.

Despite its good intentions to modernise the long-stagnant farm sector, to inject private capital and modern technology for higher yields per acre and better incomes for landowners, it finds itself stymied by vested interests.

Yields per acre in India are probably the lowest in the world. Besides, agriculture is still labour-intensive, accounting for over half the population while contributing a meagre 15 per cent to GDP.

In contrast, China has smaller arable land, but grows far more than India does. And in the US, a little over one per cent of its people are employed in agriculture, but they grow per acre in multiples of what an Indian farmer does.

In short, the farm reforms can begin the process of modernisation of Indian agriculture. Of course, the government cannot escape blame for not engaging with the stakeholders before pushing the reforms through Parliament.

The Modi government's repeated failure to broad-base decision-making for a wider consensus on far-reaching legislation has not helped its cause.

Now, should it retreat under the threat of the adamant though misguided farmers, it will lose face.

But losing a small battle and living to win a big war is sensible rather than aggravating the situation and allowing the hardliners to dig in their heels.

Right now, the utmost priority should be to clear the highways leading into the national capital.

It cannot be achieved without offering the protesters a sense of 'victory,'

Yes, sometimes bitter medicine needs to be administered against the wishes of a patient.

But in a democratic polity with multiple interests and a political Opposition waiting to pounce in the wings, no government can ramrod reforms without facing resistance from vested interests. The siege of Delhi should not be allowed to grow into a bigger, nation-wide chakka-jam.

The government should draw a lesson from this mishap: Never take the stakeholders for granted even if you mean well and want to do them a lot of good.

Finally, remember you can take a horse to water, but it is hard to make it drink if it doesn't want to.

Virender Kapoor is a former editor of the Free Press Journal newspaper and Onlooker magazine.