Jesuit priest Stan Swamy, an accused in the Elgar Parishad-Maoist links case, died on Monday while waiting for an interim bail on medical grounds. 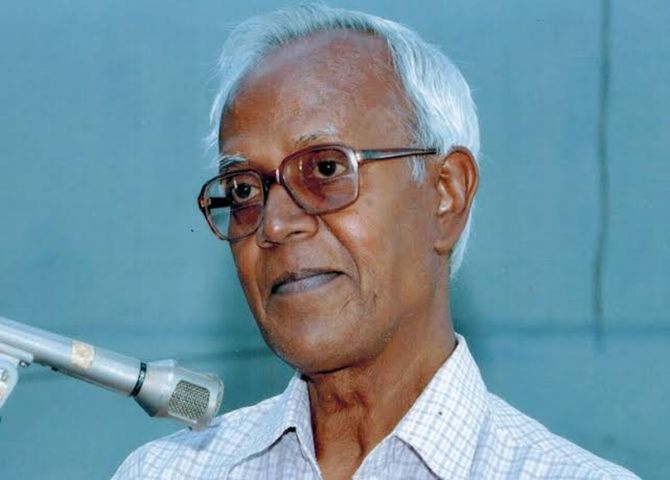 IMAGE: Stan Swamy was arrested by the National Investigation Agency in October 2020 and had been in jail since then. Photograph: Wikimedia commons

Dr Ian D'souza, director of the Mumbai-based Holy Family Hospital, the private facility where Swamy was undergoing treatment, and the tribal rights activist's lawyer Mihir Desai informed a bench of the Bombay high court of his death following cardiac arrest.

The bench, comprising Justices S S Shinde and N J Jamadar, expressed shock over the news and said it was at a loss of words and hoped Swamy's soul would rest in peace.

It said the priest had worked all his life for the "Adivasis, Dalits, and marginalised communities".

Senior counsel Desai told the HC that he had no grievances against the HC and the private hospital where Swamy was treated, but he could not say the same for the National Investigation Agency, which is conducting a probe into the Elgar Parishad-Maoist links case, and the state prison authorities.

Desai claimed the NIA had been negligent in providing timely and adequate medical aid to Swamy, and urged the HC to initiate a judicial inquiry into the circumstances that led to the undertrial activist's death.

He said Swamy was taken to the state-run J J Hospital 10 days before his admission to the Holy Family Hospital (on May 29 this year). But, he was not tested for COVID-19 at the J J Hospital, he said.

Swamy's report came out positive for coronavirus when tested at the private hospital, the lawyer said.

About the probe agency, Desai said, "The NIA did not seek Swamy's custody even for a single day, but kept opposing his bail pleas."

He also pointed out that since Swamy died while being in custody, the state authorities were mandated to conduct a postmortem in accordance with guidelines of the United Nations Human Rights Commission.

While the HC did not pass any orders initiating a judicial inquiry, it recorded in its order that the amended section 176 (1A) of the CrPC mandated judicial inquiry into every case of death in custody.

If the same provision was applicable in the present case, the state and prosecuting agencies would have to comply with the same, the HC said.

The court directed that the state authorities complete all formalities and hand over Swamy's body to his associate, Father Frazer Mascarenhas.

The directive came after Desai told the court that while normally a dead body was handed over to one's family, Swamy was a priest and had no family.

“The Jesuits were his only family,” he said.

The HC also recorded in its order that Swamy's funeral will be held in Mumbai in accordance with the COVID-19 protocols applicable in the city.

The bench was presiding over an urgent application moved by Desai to hear Swamy's medical bail plea.

The bench began the hearing asking for Swamy's latest medical reports from the hospital authorities, when the NIA intervened objecting to the urgent mentioning.

Desai then intervened, urging the HC to let Dr D'souza address the court for “just a minute".

The court was then told that Swamy suffered a cardiac arrest on July 4 early morning.

“He was put on a ventilator then, but he never regained consciousness following the cardiac arrest. He was finally declared dead this afternoon,” Dr Dsouza told the court.

The doctor said Swamy recovered from COVID-19, but had lung complications, and was also a known case of Parkinson's disease. "A possible combination of these led to septicemia," Dr D'Souza told the HC.

“We record with a heavy heart that Dr Ian Dsouza, medical director of the Holy Family Hospital, informed us that Stan Swamy passed away at 1.24 pm today,” the bench said.

“Dr. D'souza, we are sorry to know that despite your best efforts, Fr. Swamy is no longer with us. Mr Desai, accept our condolences. May his soul rest in peace. We are all very shocked. What to now say further? We appreciate your efforts. You made him (Swamy) agree to get admitted to the hospital and he got the best medical treatment. But ,unfortunately, he could not survive,” the HC said.

Swamy was earlier lodged in the Taloja prison hospital in neighbouring Navi Mumbai as an undertrial since his arrest in October 2020.

Following the HC's orders, Swamy was shifted to the Holy Family Hospital here in May this year, and the cost of his treatment at the medical facility was being borne by his associates.

At that time, a visibly frail Swamy had appeared before a vacation bench of the court via video conferencing and urged it to grant him interim bail.

He had said that his health declined steadily while in the Taloja prison. He had refused admission to the J J Hospital and had said if things continued the way they were, he "would die soon".

“I would rather suffer, possibly die very soon, if this were to go on. My deterioration is more powerful than the small tablets that the J J Hospital gives me,” he had said.

Swamy had said he wished to go to Ranchi to be among his people.

He had approached the HC earlier this year, challenging the order of a special court from March last year that denied him bail both on merits and medical grounds.

He had told the HC that he suffered from advanced stages of the Parkinson's disease and various other ailments.

The NIA, however, had filed an affidavit in the HC last month opposing his bail plea. The central agency had said Swamy was a Maoist and part of a conspiracy to create unrest in the country. It had said there was no "conclusive proof" of his medical ailments.

Last Friday, Swamy, through advocate Desai, filed a fresh plea challenging section 45D(3) of the Unlawful Activities (Prevention) Act, that imposes stringent bar on grant of bail to an accused charged under the Act.

The section, Swamy had said, created insurmountable obstacles for an accused to be granted bail and was thus, violative of one's fundamental right to life and liberty.

His medical bail plea and the fresh plea were listed for hearing last Friday, but could not be taken up by the HC due to "paucity of time."

The court had at the time adjourned the hearing to July 6, and extended Swamy's stay at the private hospital till then.

On Monday, it acceded to Desai's request for not disposing of the pleas.

The HC said it will hear Desai's submissions on the UAPA plea on July 13.