News
Business
Movies
Sports
Cricket
Get Ahead
Money Tips
Shopping
Sign in  |  Create a Rediffmail account
Rediff.com  » News » Why are these prisoners being denied their rights?

The superintendent of Taloja jail has just been transferred.
Does that signal a more human phase in prison for the Bhima Koregaon accused? asks Jyoti Punwani. Can a collective punishment be imposed on a set of prisoners for the presumed transgressions of one of them?

Can letters sent by a prisoner to his wife and his lawyer be sent directly to the trial court instead?

These actions have been committed in the world's largest democracy, by the superintendent of a jail located not in some remote district, but merely 35 km from the country's financial capital.

Yet, even after written complaints were made to him and to his superior, no action has been taken to set things right.

Hence, two of those aggrieved by his actions have gone to court for redressal.

An article by Professor Anand Teltumde, one of the accused in the Bhima Koregaon case, in the magazine The Caravan, was the trigger for this collective punishment.

Professor Teltumde, an academic, was a member of the governing body at the Goa Institute of Technology when he was arrested.

Apart from that, he has written a number of books on caste and has had articles published in a variety of publications.

Rama Teltumde was told by her husband that after his article was published, he was served a samajh patra or show cause notice, to which he replied.

However, despite requests to the authorities, Rama Teltumde has not been able to get a copy of either.

She has now filed an RTI application to the Taloja jail for copies of both. In the months following the publication of this article, families of Professor Teltumde's co-accused lodged in Taloja jail began noticing that they were not getting letters from their loved ones with the regularity that they used to.

Around this time, the second lockdown was imposed, which shut the door on all meetings in prison.

Such meetings had resumed only in December last, months after the first lockdown was lifted.

The petition points out that since March 2020 because of the pandemic, these prisoners have not once been produced in court, which is where prisoners normally look forward to meeting their families.

Phone calls (barely lasting more than 10 minutes) and letters thus have become the only ways of communication.

The families realised what was happening when the letters were written from prison finally started reaching them.

The jail authorities, they found, were posting them weeks after they were written and handed over to them for posting.

In the petition filed last week in the Bombay high court, the petitioners, Rama Anand Teltumde, and Susan Abraham Gonsalves, wives of Professor Anand Teltumde and Vernon Gonsalves respectively, have affixed the second complaint they made to the additional director general of police (prisons), Maharashtra, and to the special inspector general of police (prisons) on May 13, in which they have given a table of letters, classified by date on which they were written, posted and received.

According to this table, the shortest gap between writing and posting was 17 days, and the longest as much as two months.

Professor Hany Babu, the last to be arrested, wrote to his wife on February 5, but the letter was posted only on April 5. Surprisingly, it took another three months to reach her.

The jail authorities took six weeks to post letters written by Vernon Gonsalves and the oldest of the accused, 84-year-old Father Stan Swamy.

The table also reveals that letters were written by Sudhir Dhawale on April 19, and Advocate Surendra Gadling on May 1 are yet to reach their friends/families. 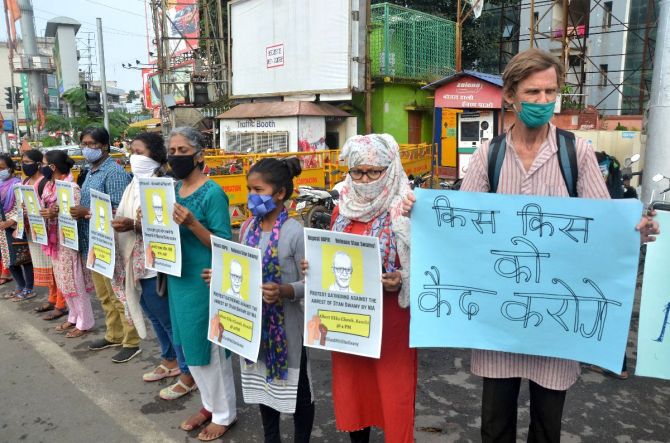 IMAGE: A protest in Ranchi after the NIA arrested 84-year-old Father Stan Swamy for his alleged involvement in the Bhima Koregaon case. Photograph: PTI Photo

Writing articles while in prison is nothing new. As far back as in 1965, the Supreme Court upheld the Bombay high court's verdict that said that the Maharashtra government was wrong in prohibiting Prabhakar Sanzgiri, the CPI-M trade unionist detained under the Defence of India Rules 1962, from having his book Inside the Atom published while in jail.

The contents of the book, said the apex court, had nothing that would affect the defence of India, public safety or the maintenance of public order.

Professor Teltumde's article in The Caravan, points put the petition, is on the economy, with no references to his life in prison or the case in which he is accused.

In fact, newspapers have in the past even published articles from prison that speak of prison life.

The poems of Telugu poet Varavara Rao, also an accused in the Bhima Koregaon case, used to be published during his many stints in prison.

One such poem caught the eye of the then editor of Indian Express Arun Shourie, who asked Rao to write a column on prison life.

'Letters from prison' was published as a fortnightly column in the Indian Express and also in the Express group's Telugu edition Andhra Prabha from December 1998 to April 1989.

More recently, Kobad Ghandy, who spent 10 years in various jails from 2009-2019 despite being acquitted of the charge of being a Maoist in most of the cases against him, wrote a number of articles from jail both for the Indian Express and Mainstream weekly. Quoting from Supreme Court judgments which assert that prisoners cannot be deprived of fundamental rights, and also from the Maharashtra Prisons (Facilities to Prisoners) Rues, 1962, the petition points out that 'communication by way of letters is a statutory right and the manner in which it has been impaired in the present case is harsh, vindictive and unilaterally punitive.' Denying prisoners the 'solace' of writing and receiving letters amounts to 'cruel and inhuman treatment" and is also a "serious abuse of power", says the petition.

This "arbitrary' act 'displays a colonial mindset', says the petition and an inquiry must be ordered against the superintendent, more so because he had, 'to add insult to injury', sent a letter written to the petitioner to the trial court.

This withholding of letters is only the latest in a series of deprivations of fundamental rights to the Bhima Koregaon accused by the Taloja jail authorities, which Rediff.com has regularly documented.

It needs to be emphasised that these accused are yet to stand trial, and are hence innocent.

Perhaps because these accused, unlike other prisoners at the mercy of jail authorities, have refused to take this denial of fundamental rights lying down, the superintendent of Taloja jail recently moved an application in the trial court asking that the Bhima Koregaon accused be transferred to another jail within or outside Mumbai since they were, through their lawyers and relatives, been giving 'false complaints' to the media to create pressure on the jail.

It may be recalled that the health of three of the Bhima Koregaon accused: 81-year-old Varavara Rao, 53-year-old Professor Hany Babu and 84-year-old Father Stan Swamy had deteriorated drastically in Taloja jail and they were finally provided quality medical care only after their families moved the high court. Professor Babu and Father Stan are still in hospital.

News has just come in that the superintendent of Taloja jail has been transferred. Does that signal a more human phase in prison for the Bhima Koregaon accused?