'If you don't have any proof about her crime, then how can you keep her in jail?' 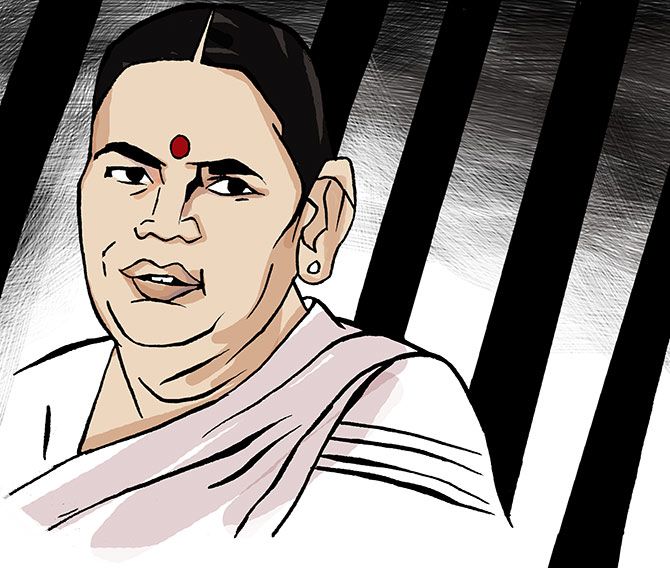 Bharadwaj was arrested for her alleged involvement in the Elgar Parishad case and alleged links with the banned CPI (Maoist) outfit.

After her arrest, Ramachandra Guha, historian and Gandhi's biographer, was in no doubt that the Mahatma would have donned his lawyer's robes -- let's not forget that Mohandas Karamchand Gandhi was a barrister called to the law at Inner Temple in England -- and defended Bharadwaj, an IIT-Delhi alumnus who has spent her life defending the rights of Adivasis in Chhattisgarh.

Lodged in the women's jail in Byculla, central Mumbai, since late February when her case was transferred from the Maharashtra police to the National Investigation Agency, Bharadwaj's bail plea on medical grounds -- she is 58, diabetic and suffers from high blood pressure -- was rejected last month by a special Mumbai court.

"If somebody is working for poor people, then does it mean they are criminals?", Maaysha, Bharadwaj's daughter who got to speak with her mother after four months on June 9, asks Prasanna D Zore/Rediff.com.

It has actually been very difficult for me to fend for myself all alone.

Sadly, I never got a chance to spend enough time with my mother when I was in school. She has been very busy with her work. So, I didn't get a good chance to understand her enough, to see how she could be as a mother.

She was always really busy doing her court and union work; protecting, defending the legal rights of those who suffered injustice.

And then she got arrested when we barely started to spend time with each other.

That's when we shifted to Delhi (from Chhattisgarh where Sudha Bharadwaj and Maaysha resided) for my college.

p>It has been almost four months since I was able to talk to her.

Surprisingly, I got a call on the morning of June 9 from my mother. I was so happy.

So, the jail authorities allow her to talk on the phone.

I don't know how, but she called me and it was really good.

The call lasted just two minutes, but I felt really good because it was almost after four months that I heard my mother's voice.

We spoke last in February (2020) when I met her in Pune's Yerawada jail.

What did she say to you on this call?

She was asking how I am doing and all that. I asked about her health and she said she was not very well.

The call got automatically disconnected after two minutes. She had called me from a mobile number. Maybe some officer's number.

Did she say anything about her fears about the COVID-19 pandemic because a doctor and 80 inmates in Byculla jail have tested positive for the virus?

The call lasted just two minutes and we weren't able to talk that much.

In the last two years, how often would you meet her?

I used to meet her twice a month. I would go all the way from Delhi to Pune and I got only five to eight minutes. I couldn't even hug her or touch her.

How would this meeting go about?

I would be made to stand behind a glass wall and communicate with her.

Sometimes, I got to meet her in court where the police officers would be very rude to me sometimes. They were always discouraging me from meeting her or hugging her.

Why haven't you met her since February 2020?

I met her last on my birthday in February.

After that, they shifted mamma to Mumbai (Byculla) jail and after that COVID happened.

She was shifted to Byculla jail from Yerawada prison because her case was handed over to the NIA.

I am even not allowed to exchange letters with her.

During past conversations you had with her when she was in jail, did she ever say that the government at the Centre and the then BJP government in Maharashtra were being vindictive or that she was being framed because she worked for the Adivasis and the workers' unions?

Ever since I was a kid I knew for sure that one day or the other, some government or the other would do that (arrest her or frame her for her pro-poor campaign) to my mother.

Because of the causes she espouses, she would tell me that one day they will take her (arrest her and put her in jail) and I was like, 'Why are you talking like that?'

It was not her fear, she was prepared for it. She always had a sense of foreboding (about her arrest).

I am planning to write an article on August 28 (the day Sudha Bharadwaj completes two years in jail). I will explain how it has been without her for two years. 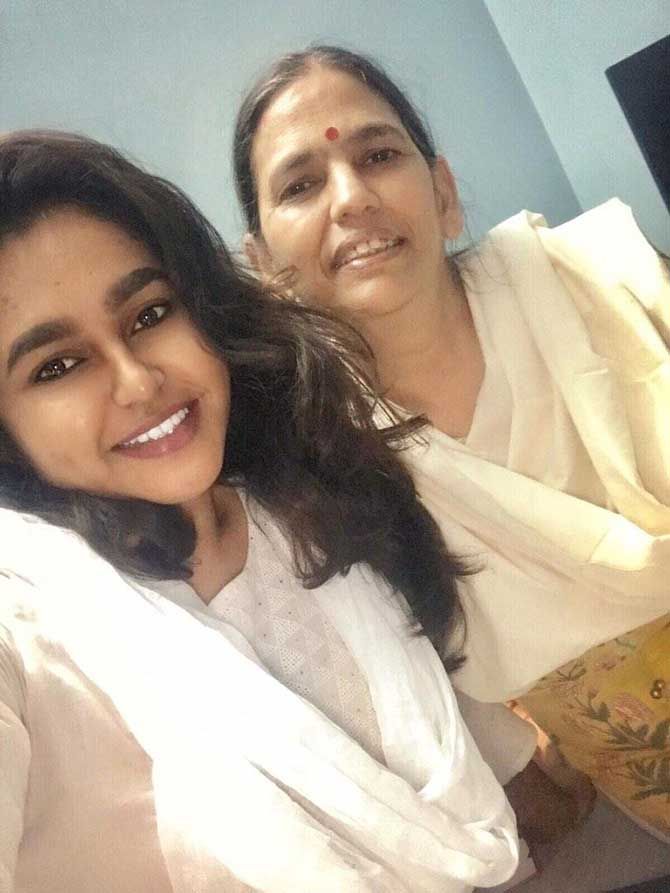 You spoke to her after four months. Why this big gap in communication? Why is she not able to call you more often?

While the court (the NIA court on March 30 directed Byculla jail authorities to allow her telephonic communication by providing proper facility; Bharadwaj's case was transferred to the NIA court in late February from the Maharashtra police) said they are allowed to make or receive phone calls, when I called on the jail number, the authorities said they haven't received any court order to allow my mother to speak on phone.

I was very shocked when I heard this.

I remember the jail authorities submitting to the court that as per the court's directions she will be allowed to make or receive phone calls.

Though Shoma aunty (Shoma Sen) gets to call her family, I didn't get any call from my mother all these days.

It was only on June 9 that I got to speak with her last.

Since the call got disconnected in just two minutes I couldn't get to speak much with her. Though it took me by surprise I was happy.

A lady officer called my number and asked if I would like to speak with Sudha Bharadwaj.

(Very hesitatingly) I have no idea about that.

How did you feel after talking to your mother after four months?

I was very happy and relieved.

It has been a very bad time I'm facing right now because I have that anxiety issue.

For the first few months after her arrest my situation was very pathetic. It still is: I am feeling the same loss and loneliness that I felt when they took her away in October 2017 from home.

I'm not sure when she will be able to come out of jail.

Do you fear that she will be not come out of jail all her life now?=

No, no, not that, but as far as I have seen, the government or the courts are not very much in our favour. So, I don't have that much of hope.

How do you cope with the loneliness of not having your mother by your side for two years now?

We used to live in Chhattisgarh and from there in 2018 we moved to Faridabad.

I can't explain what I am going through right now because I only have her in my life.

I can't even explain in words how I feel every day, every moment in my life I see.

I really miss her every day, every second of my life.

Would you have any message for the pIf you don't have any information or proof about her crime, then how can you keep her in jail?rime minister of India or for the Maharashtra home minister?
Recently, the Maharashtra home minister announced he would be taking a lenient view about releasing prisons because of the pandemic fear and your mother being 58 and suffering from hypertension and diabetes would be more vulnerable to COVID-19 in a prison setting.

I just want to say to them that it's (keeping my mother in jail during the pandemic) not really fair because they have arrested somebody who is fighting to get justice for the oppressed.

She is a single mother, and I really, really, need her in my life.

I have no source of income. I don't have anybody in my life. She is the only one and I want to request them to release my mother.

How can you believe that a lawyer who fights for the human rights of the dispossessed indulge in such crimes?

And it is really, really, not fair (to keep her in jail) that they don't have any evidence, any proof but they have kept her in jail for two years now.

You can't do that with anybody's life.

Do you think the government is doing it on purpose? That they want to harass people who work with the tribals or those suffering violation of their human rights?

If somebody is working for poor people, then does it mean they are criminals? That's what they (the government) are trying to prove.

Why do you slap UAPA on all those providing legal aid to the poor and treat them as criminals?

This is the anger and frustration that I have been living with because of my mother's unfair and illegal arrest.

I know most people won't get affected by what I am saying because they are comfortably living with their mothers, their families.

And here I am sitting alone, not getting to even talk to my mother for almost four months despite the court's order.