India's progress is linked to that of all its neighbours, Prime Minister Narendra Modi said on Thursday as he along with his Bangladesh counterpart Sheikh Hasina inaugurated Petrapole-Benapole land port which will serve as a key trade route between the two countries. 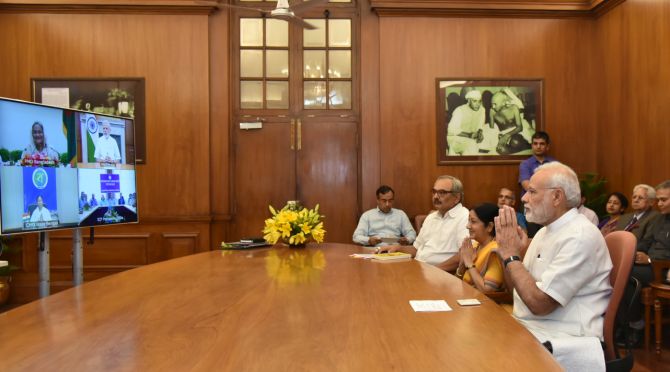 Addressing via video conferencing the event which was also joined by West Bengal Chief Minister Mamata Banerjee, he said Integrated Check Post will serve to foster more economic integration and connectivity between India and Bangladesh.

Underlining that economic development and connectivity are very closely linked to each other, Modi said, "India's progress is linked to progress of all its neighbours."

He said inauguration of the "biggest land port in South Asia" is a "very important milestone" in the relations between India and Bangladesh.

"Both India and Bangladesh have not only ventured on the path of development but are also marching together," he said.

Petrapole-Benapole is a key land border crossing for India-Bangladesh trade, with over 50 per cent of bilateral trade passing through it.

Petrapole ICP will provide better facilities for effective and efficient discharge of functions such as security, immigration, customs. It will also provide support facilities for smooth cross-border movement of people, goods and transport.

Modi noted that every year 15 lakh people and one-and-a- half lakh trucks cross this border point.

At the outset, he conveyed his deep condolences to Hasina over the loss of lives in the recent attacks and told her that India is with her in the fight against terror. 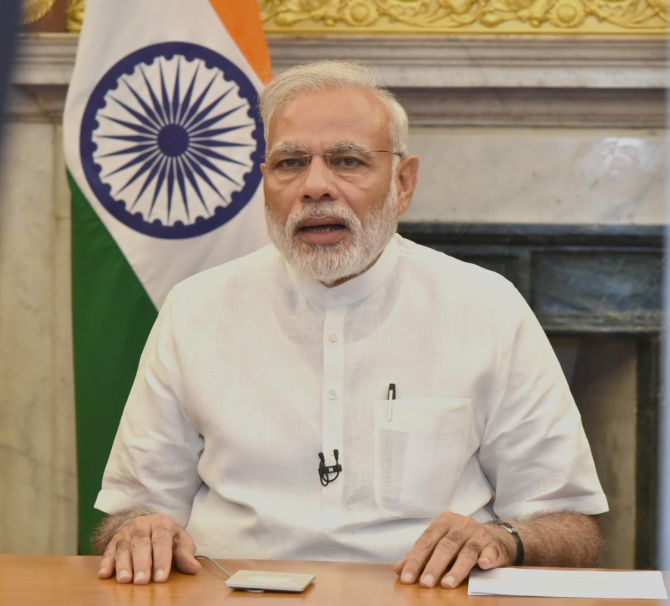 "In the fight against terrorism, do not consider yourself alone. India's full support is with you," he said.

"It's a matter of pain for me as well as for people of my country that there were two terror incidents in Dhaka and Kishoregunj during the holy month of Ramadan. It's a sad moment when temples and their priests as also civilians were subjected to inhumane torture," he said.

Modi also thanked Mamata for joining the programme and appreciated her role in improving India-Bangladesh ties.

Hasina described the ICP as an important and a significant step in developing trade and business between the two countries.

Noting that bus and rail services had already been introduced between India and Bangladesh, she said, "We are neighbours and our relation will continue to be good. Our trade and business will flourish with the setting up of the new ICP," adding that any problem between the two countries would be solved through discussion.

Hasina on the occasion also acknowledged the role of India in 1971 Liberation War.

Banerjee on her part said, "It is a historic day. The biggest land port has begun its journey. A new horizon has opened. Business worth Rs 68,000 crore is involved in this land port set up on 100 acres of land," she said.

Pointing out that West Bengal is the gateway to Bangladesh, Nepal and Bhutan, she said, "We want to develop our relationship."

Assuring all help, Banerjee said her government decided to set up a police station at Petrapole.