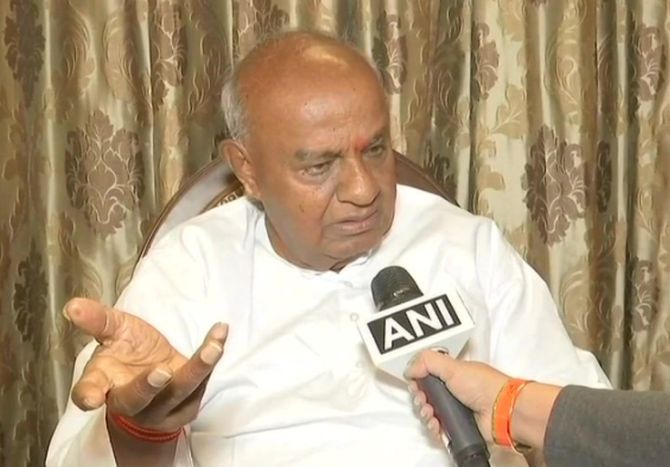 Former Prime Minister and Janata Dal-Secular supremo H D Deve Gowda Saturday ruled out any support to the Bharatiya Janata Party government headed by B S Yediyurappa, saying his party would play the role of a 'constructive' Opposition.

Gowda made the party position clear a day after a section of JD-S legislators asked former Chief Minister H D Kumaraswamy to extend support to the BJP government in Karnataka.

After a meeting of JD-S MLAs on Friday, party senior leader G T Devegowda had said, "Some have suggested that we should sit in opposition, while some legislators are of the opinion that we should support the BJP from outside."

The BJP government headed by Yediyurappa took office on Friday after the collapse of the Congress-JD(S) coalition ministry with the defeat of the motion of confidence in the assembly on Tuesday last.

"We are going to play a constructive role. As a regional party we will oppose where we have to oppose. That's all. If you (Yediyurappa) do something good for the state, we will welcome it," Deve Gowda told reporters in Bengaluru.

The JD-S patriarch said, "There is no big deal in saying so (support to the BJP). His (G T Devegowda's) intention was that the finance bill was passed (before July 31) because it was a budget presented by Kumaraswamy."

Gowda explained that G T Devegowda intended to say that the JD-S would not oppose every move of BJP just for the heck of it.

"The pain of losing power within 14 months instead of 60 months (five years) is evident among Congress and the JD-S leaders. Hence, G T Devegowda expressed his views. What's the big deal in it? Isn't it his right to express views?" he said.

Welcoming Yeddyurappa's statement that he would not practice the politics of vengeance and would take the Opposition along, Gowda promised to play the role of a 'constructive' Opposition.

Gowda also underlined the coalition pangs Kumaraswamy had to suffer as chief minister.

"My son had wept in front of the JP Bhavan for the pain he suffered ever since he became chief minister. I know everything."

The 87-year-old JD-S leader insisted that he was least bothered about the fall of the government headed by his son Kumaraswamy as he had dedicated workers to bank on. He said he would also strive to save the party. 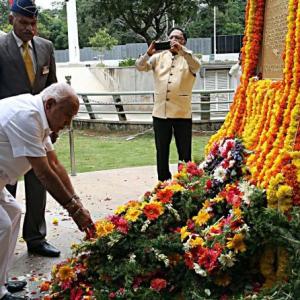