News
Business
Movies
Sports
Cricket
Get Ahead
Money Tips
Shopping
Sign in  |  Create a Rediffmail account
Rediff.com  » News » Why Yeddy may not be BJP's best bet in Karnataka

In true Karnataka political style, which cuts across parties and loyalties, any reinstatement of Yeddiyurappa, even with adequate legislative majority, could trigger rebellion from within, which could embarrass the Modi-Shah duo than any other development elsewhere in the country, says N Sathiya Moorthy. 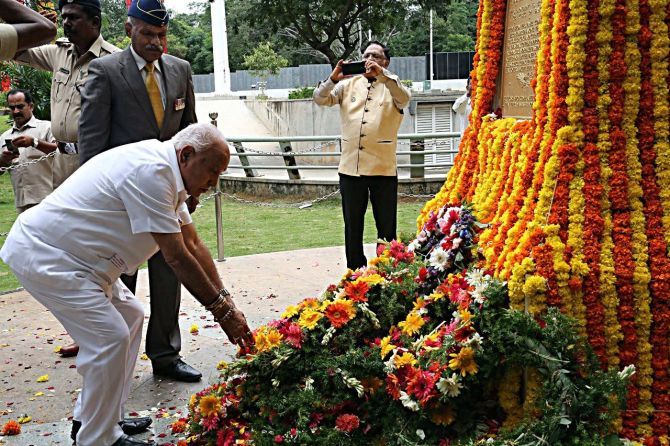 IMAGE: BJP leader BS Yeddyurappa pays tribute at the National Military Memorial in Bengaluru on the occasion of Kargil Vijay Diwas on July 26, 2019, ahead of his swearing-in as chief minister. Photograph: ANI Photo

Going by media reports, it is becoming increasingly clear that the Bharatiya Janata Party national leadership -- which for all practical purposes is a two-man army -- did not seem to have put its mind to it before clearing with the heart, the Karnataka unit’s current efforts at returning to power at all costs.

The reasons that have since been deduced for the Centre considering a brief term of President’s rule were there almost from the start, yet Union Home Minister Amit Shah, who is also the BJP president still, seems to have worn his much-mentioned ‘thinking cap’ only after the event.

The reasons for the current rethink are not difficult to seek, or pre-think. First and foremost, despite what other claimants to the chief ministership in the state BJP may – or, may not – have to say, it belonged to three-time former CM, B S Yeddiyurappa.

There is nothing on record that the BJP was actually encouraging resignations and exits from the erstwhile ruling Janata Dal-Secular-Congress coalition, but yes, all fingers pointed to Yeddiyurappa, and none else in the state party -- and none in the central leadership.

The other and more recent and relevant issue is that of Speaker K R Ramesh Kumar’s powers, ability and willingness to accept the resignations of 13 rebel MLAs and/or disqualify some of them. The BJP leadership had all the time in the earth to evaluate the prospects and problems, both before the state leadership launched its ‘cross-over’ campaign, and even more so when l'affaire Karnataka was stuck in the Supreme Court for no fault of the latter.

With Speaker Ramesh Kumar disqualifying three rebels and holding on to the ‘resignation’ of 13 others, the BJP national leadership seemed to have woken up to the realities of real time politics once the freshness of the Lok Sabha poll victories begin wearing thin.

It is one thing for the ruling party at the Centre to play-act a Goa-like wholesale defection all over again, but acting out a Karnataka time and again, maybe not on, at least as yet.

Today, the BJP’s options in Karnataka are limited, even if Speaker Ramesh Kumar accepts the resignation of the 13 rebels. Damn if he sacks them, damn if he rejects them -- and/or disqualifies them. The BJP may have numbers in a ‘smaller’ assembly as Tamil Nadu’s AIADMK chief minister Edappadi K Palaniswami did until by-elections to 22 assembly seats were conducted recently, and his party managed to re-ensure an absolute majority in the 234-member House.

Better or worse still for the BJP in Karnataka, court decisions in the Tamil Nadu case can impact its fate, too, especially if either or both of the affected parties, namely JD-S and Congress, finds grounds to challenge any ‘installation’ of a party-led government before the higher judiciary.

Such a course can dispirit BJP legislators in the state. Not that every section of the legislature party was enamoured of the possible return of Yeddiyurappa as CM, but they were hopeful of their own better days in government, some of them possibly as ministers.

But there is always a section within the state BJP, which wants the national leadership to see Yeddiyurappa only as a ‘defector’, and would not want the party’s high moral ground eroded by ‘rewarding him for past sins’.

It is thus likely that in true Karnataka political style, which cuts across parties and loyalties, any reinstatement of Yeddiyurappa, even with adequate legislative majority, could trigger rebellion from within, which could embarrass the Modi-Shah duo than any other development, elsewhere in the country.

This owes to the growing realisation that in Karnataka the BJP had grown as much under the A-V duo earlier as under the M-S duo, at present, and that the ‘Modi magic’ did not work in the assembly polls last year, beyond what the state BJP’s inherent strengths  had achieved.

For individual BJP leaders and MLAs in the state, there is uncertainty all round. They are not sure just about the Centre’s next move, and that of the party’s national leadership -- one inter-locking and dovetailing into the other. Should Speaker Ramesh Kumar simply accept the resignation of the 13 rebels, then there would have to be fresh elections, where they all needed to be accommodated against the wishes of party candidates who had worked and lost only a year or so ago.

The chances of victory are even, given that the state’s population, even while seemingly pro-BJP, need not have approved of the party’s undue haste in wanting to return to power, if only to satisfy the political greed and personal ego of a few local-level leaders.

Yielding to the Yeddiyurappas in Karnataka at this ‘late stage’ could make the ‘Delhi duo’ to look weak, for rebels elsewhere to raise their own voice of dissent against the party’s state-level leaders. It could include states where the BJP is in power now.

The chances are that the JD-Secular and the Congress may already be talking to the 13 ‘rebels’, and who knows between now and another they, some, if not all of them, may have a change of heart and decide to withdraw their resignations.

With Rahul Gandhi, though not Congress president any more, openly chiding the ‘loser’ in former party chief minister Siddaramaih, who knows the state could still see the return of the coalition in government -- in which the tail would not wag the dog any more.

Should it happen, the BJP would have only itself to blame, for possibly making the rival coalition stronger than they themselves had intended, originally.

After all, after the personal loss of the Gowda family members in the LS polls and in their chosen constituencies, the JD-S too may have been sobered, at least to some extent, even if only for a time.

Alternatively, if elections are to be held for all seats after the imposition of President’s rule, the two parties could form a pre-poll alliance, and as the last assembly polls showed, their combined vote-share was more than that of the BJP.

This could apply even more to the 13 ‘rebel’ seats if elections were to be held sooner, as these were also the seats that the non-BJP parties had won against the BJP in 2018.

The other alternative for the BJP-Centre is to promulgate President’s rule, keeping the assembly in ‘suspended animation’. But then Ramesh Kumar would still be speaker, and with the House still alive, though not kicking, his rulings would be binding.

It is possible that the BJP-Centre could consider having the 13 assembly bypolls, keeping the assembly in ‘suspended animation’, but then legal questions could emerge as to the legitimacy, and possibly the legality, of such an exercise, even if Speaker Ramesh Kumar were to keep his counsel until then.

It is another matter that most ‘rebel’ MLAs too had reportedly won because of their party’s relative strength in their constituencies, with their ‘personal contribution’ to the kitty being near-nil in many cases.