The Aam Aadmi Party has suspended its councillor Tahir Hussain, who is accused of being involved in the death of an Intelligence Bureau staffer, from the primary membership of the party till police probe is completed, AAP sources said on Thursday. 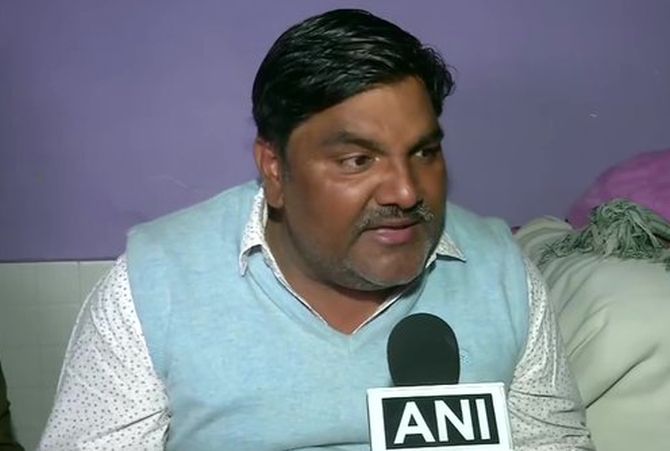 IB staffer Ankit Sharma was on Wednesday found dead in a drain in northeast Delhi's riot-hit Chand Bagh area where he lived.

Following the allegations, police have charged Hussain with murder.

The sources said Hussain has been suspended from the primary membership of the AAP till police probe is completed.

Earlier, a first information report was registered against Hussain for allegedly being involved in the killing of Sharma, police said.

The complaint was given by Sharma's father, following which a case was registered under sections 365 and 302 of the Indian Penal Code (IPC), they said.

The AAP was unequivocal in its assertion on Thursday that strict action should be taken against those who incited communal violence in northeast Delhi, with Chief Minister Arvind Kejriwal saying double punishment should be given if anyone from his party was involved.

Kejriwal at a press conference said there should not be any politics over the country's security and sought strictest punishment for the rioters.

No rioter, whichever political party they belong to, should be spared and if anyone from the AAP is found guilty, double punishment should be given, said Kejriwal, who is also the national convener of the party.

"The police does not come under me. If I had police, we would have taken strict action against those involved in violence," the chief minister said.

To a query about the allegation, a visibly agitated Kejriwal said, "Why are you asking for remarks?... Is this how we will run our criminal justice system?

"Whoever has incited violence, there should be strictest action. No one, be it they belong to BJP, AAP and Congress, should be spared."

"If my minister is involved in violence, take strict action...If anyone from AAP is found guilty, double punishment should be given," he said.

Earlier in the day, senior AAP leader Sanjay Singh said that they have heard Hussain's side of the story too and that he has been claiming innocence.

Singh said the party's stand remains clear that strictest punishment must be given to anyone associated with spreading violence.

Another AAP leader and Environment Minister Gopal Rai said probe must be conducted and action taken against those found responsible for inciting violence, irrespective of religion or caste.

"I have just one thing to say -- irrespective of religion and caste, a probe must be conducted and action must be taken even if it is Tahir Hussain or it is (BJP leader) Kapil Mishra," Rai told reporters.