Lok Sabha proceedings were disrupted for the second day on Tuesday as the Bharatiya Janata Party and Opposition members tried to shove each other amid unrelenting demands for an immediate discussion on the Delhi violence. 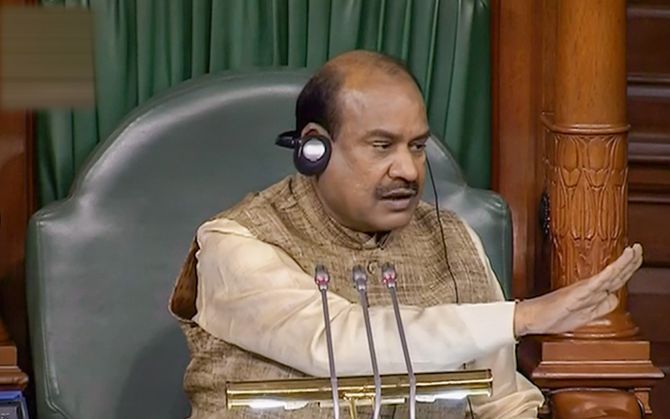 After Speaker Om Birla said the discussion would take place on March 11 after Holi festival, opposition members stormed into the Well demanding an immediate discussion.

As tempers in the House rose, Birla warned that members from both opposition and treasury benches, who cross over to the other side during uproar would be suspended for the entire session.

However, Congress leader Adhir Ranjan Chowdhury walked over to the side of the Well facing the Treasury benches, which led to a commotion between the BJP and opposition members.

Other opposition party members too followed Chowdhury towards the Treasury Benches and a commotion broke out as BJP members blocked their way.

Amid the din in which BJP and Congress members tried to shove each other and some members banged the door leading to the secretary general's desk, Birla adjourned the House for the day.

After the adjournment, Union Minister Smriti Irani was seen engaged in a heated argument with opposition members over the banging of the door as other BJP member sought to pacify her.

Earlier in the day, opposition members' vociferous demand for immediate discussion on the issue of Delhi violence led to the speaker adjourning the House twice.

As the House met at 2 pm, Birla said he has spoken to members from the treasury benches as well as the opposition and they have agreed to accept what the speaker decides.

"We are working for the benefit of the country. Keeping in mind the situation in the country, celebrate Holi festival in peace and harmony ... Government is ready to discuss the issue after Holi on March 11," Birla said.

He asked opposition members to return to their seat and said the House would take up for discussion important issues for discussions for the welfare of SCs, STs and OBCs.

"You do not want to discuss issues related to Dalits," Birla asked the opposition members.

Even as opposition members raised slogans of 'Down Down BJP', 'Save India', and some tore papers and threw them in the Well, Birla continued with the proceedings of the House and Finance Minister Nirmala Sitharaman introduced The Banking Regulation (Amendment) Bill, 2020. 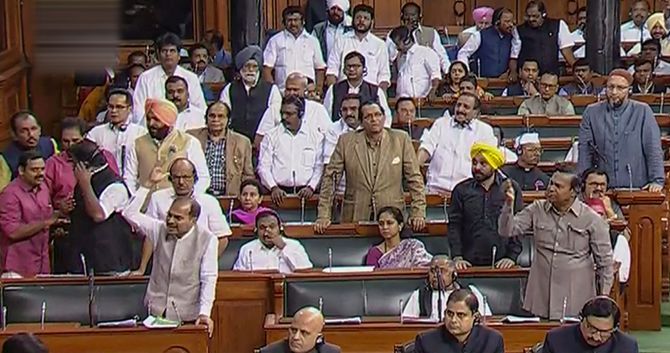 On Monday, the House had witnessed acrimonious scenes with the BJP and opposition members pushing and shoving each other.

Earlier in the day, Parliamentary Affairs Minister Pralhad Joshi said the government was ready for a debate on the issue during Zero Hour but the Opposition sought an immediate discussion.

As soon as the House met for the day at 11 am, members from the Congress, Dravida Munnetra Kazagham and other opposition parties were on their feet, demanding a discussion on Delhi violence.

The speaker told agitating members that issues can be raised during the Zero Hour at noon and he wanted to take up the Question Hour.

Opposition members, including from Congress, DMK, TMC and other parties, wanted the discussion to be held on Delhi violence.

DMK leader T R Baalu said the government is yet to respond on the issue in Parliament, while Chowdhury demanded an immediate discussion.

Over 40 people have been killed and 200 injured in violence in northeast Delhi.

Amid the uproar, Parliamentary Affairs Minister Joshi said the opposition can raise the matter during the Zero Hour.

Emphasising that "restoration of peace and normalcy" is the topmost priority of the government, Joshi said, "charcha ke liye taiyyar hai (we are ready for discussions)".

However, opposition members were not satisfied and demanded that there should be an immediate discussion. In response, Joshi said the speaker should decide. 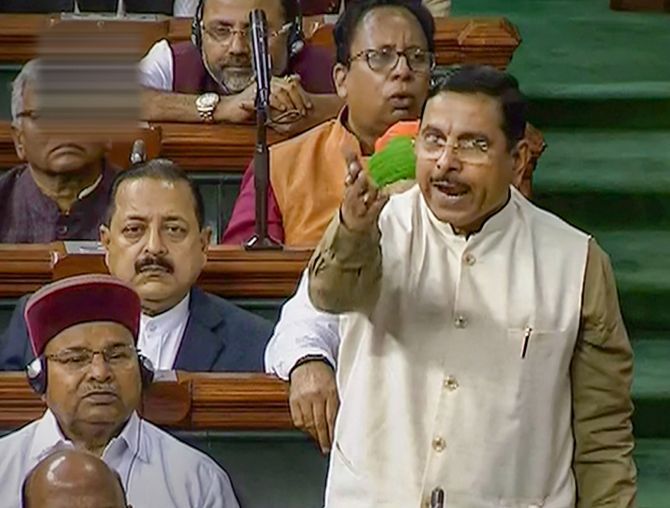 IMAGE: Union Parliamentary Affairs Minister Pralhad Joshi speaks in the Lok Sabha. He said the government was willing to debate the Delhi riots amid sloganeering and protests in the Lower House. Photograph: PTI Photo

As opposition members showed placards and shouted slogans, Birla said placards would not be allowed in the House, triggering protests from the opposition.

A visibly peeved Speaker wanted to know from agitating members whether they wanted placards to be allowed in the House.

"Does it work that way," Birla asked the agitating members amid the ruckus.

As the pandemonium continued, the speaker announced that members from both opposition and treasury benches who cross over to the other side during uproar would be suspended for the entire session.

Citing earlier discussions among various parties, the speaker said it was decided that howsoever serious the issue was, the same could be raised during the Zero Hour.

There should be cooperation among members so that the House can function well.

Referring to an all-party meeting, Birla said he is giving a ruling that any member who crosses over to the other side during proceedings would be suspended from attending the House for the remaining session.

Such action would be taken against members from treasury as well as opposition sides, he said.

As the ruckus continued, the speaker adjourned the House till noon.

At the beginning of the day's business, many ruling party members were heard saying 'Vande Mataram'.

When the House re-assembled at noon after the first adjournment, the opposition protests continued.

Kirit Solanki, who was in the chair, appealed to members to take their seats as the House was going to take up several important issues for discussions for the welfare of SCs, STs, OBCs, senior citizens and weaker sections of the society.