No stranger to controversy, Meghalaya Governor Tathagata Roy has now suggested that lessons can be learnt on how to control the 'engineered disturbances' of Delhi from the 1989 Tiananmen Square incident of China.

Thousands of pro-democracy protesters were killed on June 4, 1989 in and around Beijing's Tiananmen Square as the People's Liberation Army launched a brutal crackdown on those demonstrating there against the ruling Communist Party of China for weeks.

'Remember Tienanmen Square, Beijing in 1988? And how Deng Xiaoping handled it? Perhaps there is a lesson there on how to handle the engineered disturbances of NE Delhi! I'm sure all comrades will agree!' Roy tweeted on Wednesday only to delete it later.

In the tweet, he wrote 'Tienanmen' for 'Tiananmen' and also mentioned the year as 1988.

The Governor on Thursday defended his tweet when he told reporters, "What is contained in the tweet is there. I am not going to hallucinate it."

In response to a Twitter user's reply to his post, Roy, who is former West Bengal Bharatiya Janata Party president, wrote, 'Deng (Xiaoping) rescued China from the murderous cult of Maoism and took it to today's dizzy heights!'

In his Twitter profile, Roy describes himself as a 'right-winged Hindu socio-political thinker, writer and ideologue. Also Governor, Meghalaya'.

He also questioned the timing of the riots.

'Disturbances in NE Delhi (communal,as per Times Now) were engineered to coincide with the US President's visit. Trump, like a true statesman, did not discuss India's internal matters like Art 370 abrogation, ban on Teen Talaq or CAA. Egg on the face of Left-Islamists (sic),' he said in another tweet.

Last year, Roy created a furore when he appealed to people to 'boycott everything Kashmiri' following the Pulwama terror attack on a Central Reserve Police Force convoy.

He had also triggered a storm last July by claiming that Bengali boys sweep the floors of houses across the country these days and Bengali girls dance in Mumbai's bars. 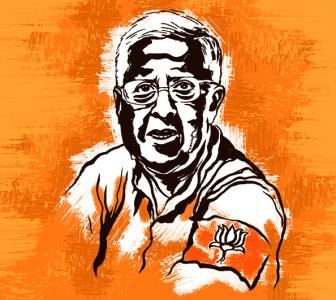