Cong in state of shock after Azad's resignation; our doors are open, says BJP

Ghulam Nabi Azad's resignation from the Congress created a political storm in Jammu and Kashmir Friday as former minister RS Chib and four other party leaders also quit, and more are likely to go, leaving the grand old party in disarray in the union territory. 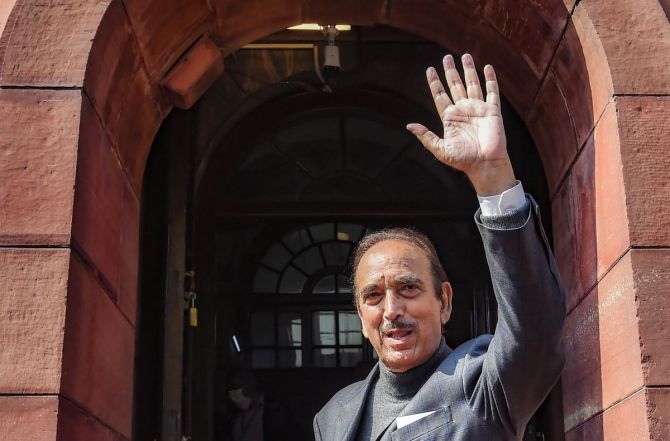 As Azad ended his decades-old association with the party, leaders across political spectrum praised his contribution to Jammu and Kashmir, with the BJP hailing him as a "towering leader".

However, recently designated Jammu and Kashmir Pradesh Congress Committee president Vikar Rasool Wani -- also seen as an Azad loyalist -- and his predecessor G A Mir, who belonged to the rival camp, said they will work with double the resolve now to strengthen the party at the grassroots in the union territory.

JK Bharatiya Janata Party president Ravinder Raina said Azad was a "towering leader" and with his resignation, the Congress ship has sunk completely. He said the BJP's doors are always "open for all those who want to contribute to the nation".

Hours after Azad -- a former J&K chief minister -- announced his decision, Chib and ex-MLA Mohd Amin Bhat, both considered close to him, also decided to leave the party.

"Keeping in view the turmoil that the state of JK has witnessed over the past decades, people require a decisive leader like Azad to guide them towards a better future. I feel the Congress party has not been able to play the role expected of it," Chib said in his resignation letter addressed to Congress president Sonia Gandhi.

Saroori, a former vice president of JK unit of Congress, and several other leaders have already reached Delhi to meet Azad, sources said.

Wani said Azad quitting the party was very sad and shocking. "He should not have done it."

"But we will work overtime and double our efforts" to rejuvenate the party in the Union Territory."

Wani said the JKPCC stands with Congress President Sonia Gandhi. "We will be guided by her leadership," he told PTI.

Former PCC president Ghulam Ahmad Mir said it was unfortunate that Azad, who was given important posts during his 45 years in the Congress, fled the battlefield when asked to do something for the party in J&K.

"The Congress bestowed on him everything in the past 40 years to make him one of the biggest voices to emerge from Jammu and Kashmir. Lok Sabha, Rajya Sabha, CWC membership, chiefministership...everything was served to him on a platter," Mir said.

Saifuddin Soz, another former PCC chief, said Azad should not have left the party.

"It is my love of Azad sahib that I am saying this. He should have stayed within the party. He had a stature in the Congress which he would not get elsewhere," Soz said.

CWC member Tariq Hameed Karra refused to comment on Azad's resignation, while working president and former minister Raman Bhalla said his resignation at the current juncture is "unfortunate" as people are looking towards the party for leadership in the face of price hike, growing unemployment and deteriorating situation in JK.

"People come and go but the party remains. We are linked to the ideology of the Congress," he said, after chairing a meeting of the party leaders at the Congress headquarters in Srinagar soon after the news about Azad's resignation became public.

"The party will chalk out its strategy once the elections to the JK assembly are announced and will take a decision in the best interest of the people," he said, dodging questions on the resignation's likely impact on the party's election prospect.

National Conference leader Omar Abdullah tweeted, "Long rumoured to be in the offing but a body blow to the Congress nonetheless. Perhaps the senior most leader to quit the party in recent times, his resignation letter makes for very painful reading. It's sad, and quite scary, to see the grand old party of India implode."

Peoples Democratic Party president Mehbooba Mufti said she would not comment on Azad's resignation as "it is an internal matter of the Congress party".

Azad in his stint as chief minister of Jammu and Kashmir from November 2005 to July 2008 left an indelible mark on the the erstwhile state and its development.

His government completed many languishing development projects in record time by introducing double-shift working. Some of the major landmarks developed during his tenure include the new assembly complex, new museum building, Hajj house and many educational institutions.

When he returned to the Centre as Health minister in UPA-2, Azad sanctioned five new medical colleges and two superspeciality hospitals for Jammu and Kashmir.

JK BJP president Raina said, "A towering leader like Azad who gave his blood, sweat and youthfulness to the party for many decades was insulted and humiliated, forcing him to take such a decision. The Congress is a sinking ship and after his leaving the party has finally sunk."

He lauded Azad for "showing mirror" to the Congress leadership in his resignation letter and said the BJP has been saying it all along that there is no internal democracy in the Congress which only revolves around the Gandhi family.

"His stature is very high and we respect...BJP is a party, whose doors are always open for all those who want to contribute for the nation. We will honour his decision with regard to his future in politics," he said. 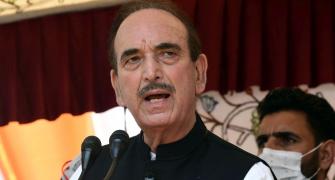 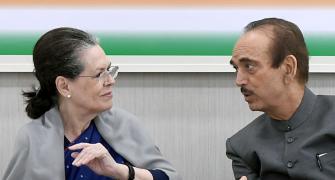 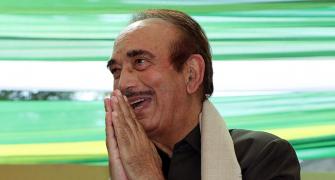 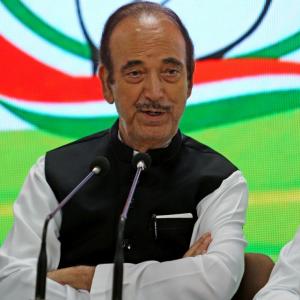