Public spaces cannot be occupied indefinitely and demonstrations expressing dissent have to be in designated places alone, the Supreme Court said on Wednesday while concluding that occupation of public
ways in the anti-Citizenship Amendment Act protests at Shaheen Bagh in Delhi was "not acceptable". 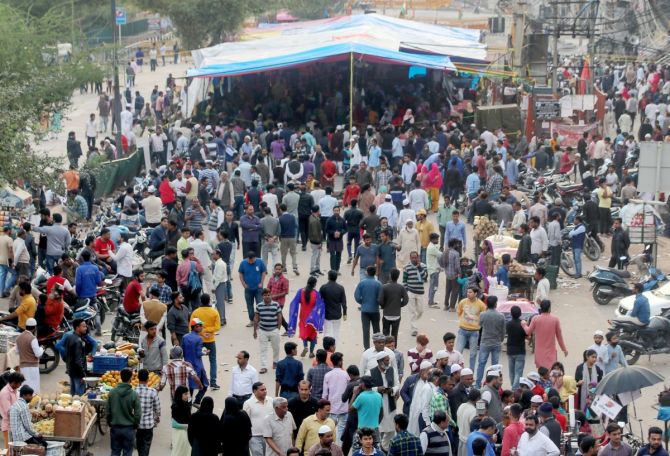 Observing that democracy and dissent "go hand in hand", the apex court said constitutional scheme comes with the right to protest and express dissent, but with an obligation towards certain duties.

A bench headed by Justice S K Kaul said erstwhile mode and manner of dissent against colonial rule cannot be equated with dissent in a self-ruled democracy.

"However, while appreciating the existence of the right to peaceful protest against a legislation... we have to make it unequivocally clear that public ways and public spaces cannot be occupied in such a manner and that too indefinitely," said the bench, also comprising Justices Aniruddha Bose and Krishna Murari.

The bench delivered its verdict on a plea by lawyer Amit Sahni against blockade of a road in Shaheen Bagh area by those protesting against Citizenship Amendment Act, which aimed to provide Indian citizenship to persecuted minorities of Pakistan, Afghanistan and Bangladesh.

It said protest at Shaheen Bagh was a blockage of a public way which caused grave inconvenience to commuters.

"We have, thus, no hesitation in concluding that such kind of occupation of public ways, whether at the site in question or anywhere else for protests is not acceptable and the administration ought to take action to keep the areas clear of encroachments or obstructions," it said.

"Democracy and dissent go hand in hand, but then the demonstrations expressing dissent have to be in designated places alone," it said, adding, "We cannot accept the plea of the applicants that an indeterminable number of people can assemble whenever they choose to protest."

It said despite a lapse of a considerable period of time, there was neither any negotiations nor any action by administration, warranting the court's intervention in the matter.

"In what manner the administration should act is their responsibility and they should not hide behind the court orders or seek support therefrom for carrying out their administrative functions. The courts adjudicate the legality of the actions and are not meant to give shoulder to the administration to fire their guns from," it said.

"What must be kept in mind, however, is that the erstwhile mode and manner of dissent against colonial rule cannot be equated with dissent in a self-ruled democracy," it said.

"Article 19, one of the cornerstones of the Constitution of India, confers upon its citizens two treasured rights, ie, the right to freedom of speech and expression under Article 19(1)(a) and the right to assemble peacefully without arms under Article 19(1)(b). These rights, in cohesion, enable every citizen to assemble peacefully and protest against the actions or inactions of the state. The same must be respected and encouraged by the state, for the strength of a democracy such as ours lies in the same," it said.

"We only hope that such a situation does not arise in the future and protests are subject to the legal position as enunciated above, with some sympathy and dialogue, but are not permitted to get out of hand," it said.

It said people live in the age of technology and internet where social movements around the world have swiftly integrated digital connectivity into their toolkit, be it for organising, publicity or effective communication.

'The ability to scale up quickly, for example, using digital infrastructure has empowered movements to embrace their often-leaderless aspirations and evade usual restrictions of censorship; however, the flip side to this is that social media channels are often fraught with danger and can lead to the creation of highly polarised environments, which often see parallel conversations running with no constructive outcome evident," the bench said.

The bench said in its endeavour of pursuing an "out of the box solution", it had appointed two interlocutors -- senior advocate Sanjay Hegde and Sadhana Ramachandran -- to meet the protestors at the site.

The report filed by interlocutors suggested that views reflected in private conversations with the protestors were somewhat different from the public statements made to the media and to the protesting crowd in attendance, the bench noted.

"It appeared that an absence of leadership guiding the protest and the presence of various groups of protesters had resulted in many influencers who were acting possibly at cross-purposes with each other," the bench noted in its verdict.

"Thus, the Shaheen Bagh protest perhaps no longer remained the sole and empowering voice of women, who also appeared to no longer have the ability to call off the protest themselves. There was also the possibility of the protestors not fully realising the ramifications of the pandemic, coupled with a general unwillingness to relocate to another site," it noted.

It said the Delhi high court, before which Sahni had earlier filed a petition on the issue, should have monitored the matter rather than disposing of the petition and "creating a fluid situation".

Restrictions were imposed on the Kaindi Kunj-Shaheen Bagh stretch and the Okhla underpass, which were closed on December 15 last year due to the protests. Later due to COVID-19 pandemic, the area was cleared.