'The BJP is not an enemy of Muslims, but friends.' 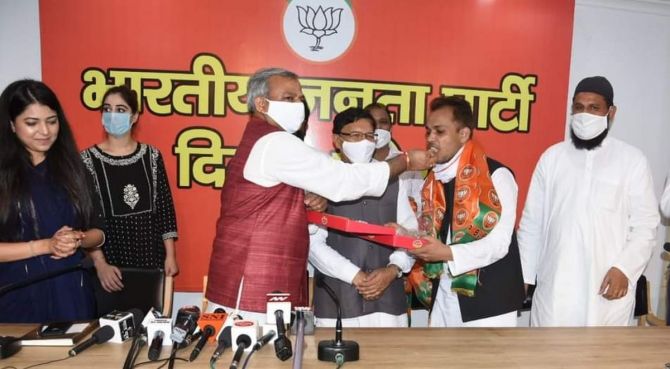 IMAGE: Shehzad Ali being welcomed into the BJP by its Delhi unit President Adesh Gupta.

Shahzad Ali, a sales and marketing manager in a mobile phone company, was among the group of Muslims from Delhi's Shaheen Bagh area who joined the Bharatiya Janata Party on August 16, 2020.

Hailing from Muzaffarnagar in Uttar Pradesh, Ali has been living around the Shaheen Bagh area for the last 15 years and his office too is located in the same neighbourhood.

He was vociferous against the BJP over the Citizenship (Amendment) Act and took part in the Shaheen Bagh protests, but eight months later, he has had a change of heart and joined the BJP.

Shahzad Ali spoke to Syed Firdaus Ashraf/Rediff.com about his reasons for joining the BJP.

I sat at the Shaheen Bagh protests regularly to oppose the Citizenship (Amendment) Act. I have no political connections and no one in my family was ever involved in politics.

I was a regular guy protesting at Shaheen Bagh and while sitting there for hours I realised that the only way to end this protest was through dialogue with the government.

And as I spent more time over there, I realised that whenever there was a chance for dialogue with the BJP government, AAP (Aam Aadmi Party) cadres or Congress cadres or their leaders used to spread false rumours about the BJP, ensuring that the dialogue did not take place between the BJP and Shaheen Bagh protestors.

Even today they don't want to build a bridge between the Muslim community and the BJP because if they do that, they will lose Muslim votes.

In the Muslim community there is a rumour that has been spread for very long that the Bharatiya Janata Party is an enemy of Muslims. And this is more like a propaganda from all the parties who are opposed to the BJP.

I now feel that till the time you don't join the BJP or be with them like friends, you will never understand what they think about Muslims.

And since I have now joined the BJP, I have realised that whatever propaganda about the BJP -- that they are bad, etc -- is only propaganda.

This has been spread by other political parties, but after joining the BJP I have realised the BJP is not an enemy of Muslims.

When the Shaheen Bagh protests ended after COVID-19 broke out, I had time to look deeper into the Citizenship (Amendment) Act and in my research, I found out that not a single Indian Muslim has been stripped of citizenship.

Another thing I found out was that when you approach BJP leaders to know about the CAA, they openly welcome you for discussions. Even Prime Minister Narendra Modi has said many times that he will clear any myths or doubts of the Muslim community on the CAA if they went to meet him.

Many argued that the CAA is a first step towards the National Register of Citizens, but the fact is that the NRC is nowhere in the picture and it is not coming.

The dharna at Shaheen Bagh Delhi was about the CAA, the NRC was not a part of that protest, and I want to ask everyone who says the BJP will strip Muslims of their Indian citizenship, show me one example where the BJP has stripped the citizenship of Indian Muslims after CAA. The answer is, none.

No one can prove this allegation with facts and figures.

I was told about Article 14 which speaks of equality before law, and my answer to them is that the BJP government has never stripped any Muslim of his/her citizenship.

People oppose government policies till the time they feel it is unjust and wrong, but once they are convinced that it is not wrong, they stop opposing it. And I did that after I understood the CAA.

When I was protesting, I felt we could sit down with the government and solve the CAA problem and now when I was explained this policy by them, I am wondering why we were sitting on a dharna at Shaheen Bagh!

And since I was there, let me tell you that Shaheen Bagh protestors wanted it to end, but the Congress and AAP never wanted it to end because they wanted the Muslim votes.

The AAP had put up huge posters in Muslim localities of Delhi that if you want to defeat the BJP and RSS, then vote for AAP.

Now when I look back, I understand that they propagated this theory that Muslims must defeat the BJP. But now I wonder, why should we Muslims defeat the BJP? What wrong have they done to us? Nothing.

The BJP is not an enemy of Muslims, but friends.

And today we are 70 people who have joined the BJP and more will join in future.

AAP is saying that we were always a stooge of the BJP, but it is a fact that AAP leaders started Shaheen Bagh protests to get political mileage during the Delhi elections. They won the elections and then they went on a silent mode on this issue.

During the Delhi riots, BJP leader Kapil Mishra made some wrong statements against the Muslim community and I say that he must not to do it and I condemned it.

But what was Arvind Kejriwal, the chief minister of Delhi, doing when the riots were occurring? The answer is, nothing.

As the chief minister of Delhi he should have come out on the streets and met the protestors of Shaheen Bagh and dispersed them, but he refused to do so.

Now when I have joined the BJP, rumours are being spread by the AAP and Congress that I was never a part of the Shaheen Bagh protests.

The Shaheen Bagh protests were spontaneous. There were no leaders at the protest spot and it was a random protest in which I too was present.

Worse, now people are calling me a traitor in my area and in the place where I stay I am being threatened that I will be thrown out of my house because I have joined the BJP.

Yesterday, some people came to my place and threatened me via someone that my life will be in danger if I continued to work for the BJP.

They said the BJP will not work in Muslim areas.

The problem is that the gap between the BJP and Indian Muslims is huge and you cannot fill this gap overnight.

Muslims must build bridges with them and only then will this mistrust disappear.

I have never voted for the BJP in the past, and have voted only for the Congress. Since my childhood I was told that the BJP is an enemy but when I joined them it was nothing like that.

Luckily, BJP leader Nighat Abbas came as a bridge between us and the BJP. She made us understand what the CAA was and how it will not harm Muslims.