Campaigning for the second phase of Bihar assembly elections ended on Sunday evening, setting the stage for polling on Tuesday in 94 constituencies spread across 17 districts. The last day of campaigning witnessed hectic canvassing with Prime Minister Narendra Modi addressing four back-to-back rallies in support of National Democratic Alliance candidates, and Rashtriya Janata Dal leader Tejashwi Yadav, who is also in the fray in this phase, criss-crossing over a dozen venues.

According to the Election Commission, more than 2.85 crore voters will decide the electoral fate of 1,463 candidates -- 1,316 male, 146 female and one transgender.

Maharajganj constituency has the maximum 27 candidates in this phase, while the minimum four are from Darauli constituency.

The BJP's charge was led by Prime Minister Modi, who addressed seven rallies over two days, including the four on Sunday.

In his Sunday rallies, the prime minister excoriated the opposition over the Pulwama attack after Pakistan's admission of complicity in it and berated the RJD-Congress combine, calling it an alliance of "double-double yuvraj" (two crown princes) whose sole concern was to protect their "respective thrones".

BJP leaders repeatedly raked up the Ram temple issues, Article 370, triple talaq and also prominently mentioned the Pakistani minister's admission of his country's involvement in the Pulwama attack of 2019 that had left 40 CRPF jawans dead.

For attacking the RJD, their constant refrain was "jungle raj", "lantern era", "kidnapping industry", slamming the party over its record on law and order.

At a rally on October 28, PM Modi had targeted Tejashwi, calling him "Jungle Raj Ke Yuvraj (the crown prince of jungle raj)".

He had said the prime minister talks about other countries in his speeches but not about the issues facing the nation such as unemployment.

Tejashwi, in the meanwhile, scaled up the intensity of his campaign and addressed close to a dozen, or even more, rallies every day since the voting for phase 1 of election on October 28.

He kept his focus on his promise of 10 lakh jobs, while also assailing Kumar over a record "46.6 per cent unemployment", poor status of education and health facilities, the handling of the coronavirus crisis among other things.

Tejashwi's salvos drew stinging response from Kumar who tried to blunt his attack by comparing the law and order situation under the RJD's government (1990-2005) with that under his 15 rule and constantly reminding the voter that RJD chief Lalu Yadav has been implicated for corruption and is serving a jail term.

Kumar also kept counting his government's work on power, road and giving reservation to women in local bodies. He also said that he would prefer population-proportionate reservation.

Tejashwi's elder brother Tej Pratap Yadav is also in the fray in this phase.

Also in the fray is Chandrika Roy from the JD-U, the father of Tej Pratap Yadav's estranged wife Aishwarya Rai, who in her campaign has been highlighting the alleged "ill-treatment" meted out to her by RJD chief Lalu Prasad's family.

This phase is also very crucial for Chirag Paswan-led Lok Janshakti Party which has fielded 52 candidates.

Their performance in this phase will indicate if the issues raised by Paswan during his campaign -- corruption charges against Nitish Kumar, education degrees getting delayed, lack of jobs, and migration for livelihood -- found resonance among the people.

Congress leader Shatrughan Sinha's son Luv Sinha is also in the fray this phase from Bankipur seat in Patna. He is up against sitting BJP MLA Nitin Nabin.

Voting will begin at 7 am on November 3.

The third and final round of voting will take place on November 7 and the counting of votes on November 10. 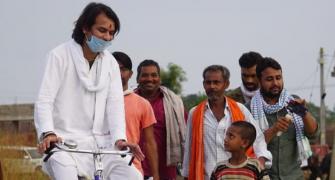 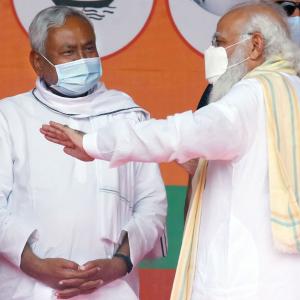