The strange case of Nitish's dissenting voice within NDA

From opposing the NPR and NRC to demanding special status for Bihar to staying out of the Union Cabinet on principle to showing the BJP who was boss in Bihar, Nitish Kumar has wasted no opportunity at cocking a snook at the BJP leadership.
But how long can he continue, asks Gopal Krishna. 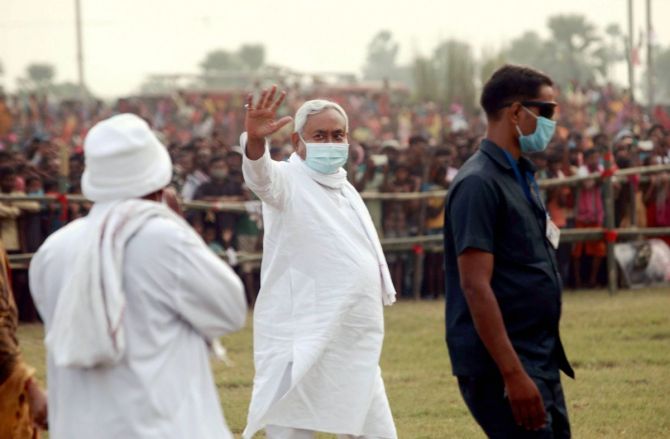 As a consequence of the protest by the Communist Party of India-Marxist-Leninist, Congress and Rashtriya Janata Dal against the National Population Register/National Register of Citizens,the Bihar assembly unanimously passed a resolution not to implement the NRC in the state and against the new format of the NPR on February 25, 2020.

It was a result of the conversation between the Opposition parties and the Janata Dal-United. The Bharatiya Janata Party was constrained to support the resolution even as its Jan Jagran Abhiyan was underway to make people aware about the CAA, NRC and NPR in different districts of Bihar.

Deputy Chief Minister Sushil Kumar Modi, the BJP leader in the legislative council, had announced that 'the first phase of Census 2021 and the process of the National Population Register in Bihar would be done between the period of May 15 and June 28, 2020'.

Modi had also tweeted saying that the Bihar government has issued a notification on December 18, 2019 to this effect. 'No government has the courage to stop the NPR exercise in their respective states,' he added.

Instead of endorsing the BJP's position, JD-U President and Chief Minister Nitish Kumar assured the Bihar assembly that the NRC will not be implemented in the state and the NPR would be implemented in its old, 2010, format.

The CM took the position that he had no problem if the House took a unanimous decision not to implement the NRC in the state. This position was supported by the Leader of Opposition Tejaswi Yadav following which the House unanimously passed a resolution for the same to the BJP's dismay.

Such a categorical position revealed that the JD-U is one of the Opposition voices within the BJP-led National Democratic Alliance. After the exit of the Shiv Sena and Akali Dal, it remains the only dissenting voice within the NDA.

Encouraged by the passage of the unanimous resolution on the NPR/NRC, the JD-U president reiterated his demand for special category status to the state at the 24th Eastern Zonal Council meeting chaired by Union Home Minister Amit Anilchandra Shah in Bhubaneswar.

Notably, the Bihar assembly has passed a unanimous resolution asking the state government to take an all-party delegation to Prime Minister Narendra Damodardas Modi in this regard.

The BJP-led NDA government has betrayed the people of Bihar, as the PM had promised special status to the state during his 2014 Lok Sabha poll campaign.

The JD-U president had raised the issue at the Inter-State Council meeting in Delhi in July 2016. In May 2017, he sought special status and assistance for Bihar in a three-page letter submitted to the prime minister.

Except from June 2013 to August 2017, the JD-U has been a part of the NDA since its inception. In 2019, the JD-U president decided against joining the Union Cabinet because its proposal for proportionate representation in the government did not get a positive response.

The BJP leadership was offering only one Cabinet ministership as a symbolic gesture, an offer the Lok Janshakti Party readily accepted.

The JD-U has 16 Lok Sabha MPs and six Rajya Sabha MPs. But the central government remained deaf to its argument that it had given proportionate representation to the BJP in the state government despite the JD-U not being included in the first Union Cabinet constituted in 2014.

Immediately after the JD-U president returned to Patna after attending the swearing-in ceremony of Prime Minister Modi and his council of ministers, he sent a clear message to the BJP with the expansion of his state cabinet that the BJP may control the Centre but in Bihar the JD-U's is the last word.

He unequivocally spoke against 'sanketic pratnidhitav (symbolic representation)' which has been accepted by parties like the LJP. Responding to the treatment by the BJP leadership, he expanded his cabinet in Bihar with eight JD-U ministers.

It is difficult to recall instances wherein the BJP leadership agreed to any of the JD-U chief's demands in the interest of Bihar.

The supreme BJP leader publicly refused the JD-U president's proposal for Patna University to be declared as a central university in October 2017.

On the occasion of the centenary celebration of Patna University's central library, in August 2019, Nitish Kumar reiterated his demand for the status of central university for Patna University, but to no avail.

Most recently, on September 21, 2020, when Nitish Kumar emphasised the need to extend the Purvanchal Expressway, which connects Ghazipur district in Eastern Uttar Pradesh with Lucknow to Buxar, the supreme BJP leader chose not to give a positive response.

The extension of the road by another 17 kilometres from Ghazipur to Buxar can help Bihar connect directly with the national capital.

The denial of Bihar's share of indirect tax revenue under the GST regime is around Rs 12,000 crore for 2020-2021. This is likely to become an election issue.

Bihari parties can join hands to resist such economic injustice the way Punjabi parties have joined hands on the issue of agriculture and farmer related laws. The JD-U has been in alliance with almost every party in Bihar, including the CPI and CPI-ML, in the recent past.

The JD-U's absence from the NDA government at the Centre and the absence of Ram Vilas Paswan, the only Cabinet minister from among the BJP allies in the state, has created a new situation.

Till now only the supreme leader has been cutting him down to size to deny him a fourth term as chief minister, but now it seems the new LJP supremo has been unleashed on him to silence the last dissenting voice within the NDA.

There are at least two kinds of Opposition voices -- one is carnivorous and the other is herbivorous.

History shows that both get tamed one way or the other by the donors through State power, but records reveal who remained a dissenting voice and a voice of the people amidst all the structural compulsions engineered by limitless anonymous donors.

The temptation to readily fall prey to lazy binaries and dualities makes one miss myriad layers of opposition in global politics as well as local politics.

If one remains hostage to pre-existing language which is caught in a time warp, one is left with the luxury of post-result analysis.

As to the promises being made publicly by the BJP with regard to his leadership in Bihar, one is reminded of what British parliamentarian Edmund Burke said in December 1783 about the East India Company: 'The Company has never made a treaty which they have not broken.'