Prime Minister Narendra Modi on Sunday blazed through the electoral battleground in Bihar mocking Rashtriya Janata Dal's Tejashwi Yadav and Congress leader Rahul Gandhi as "double yuvraj" (two crown princes) who stood for "jungle raj" and were pitted against the National Democratic Alliance's "double engine" growth which has pulled the state out of lantern age. 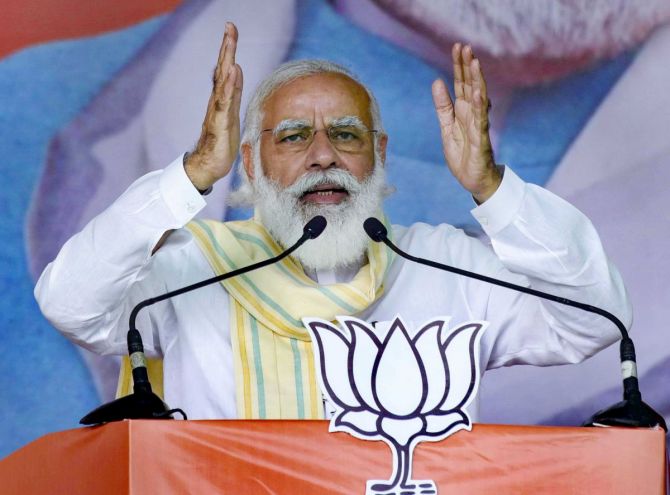 Firing on all cylinders on a day when campaign for 94 assembly segments going to polls in the second phase came to an end, Modi also touched upon contentious issues like Balakot air strike, Ayodhya, Article 370, Citzenship Amendment Act and the alleged anti-national slogans raised at JNU by pro-Left activists.

"One of the double yuvraj had forged an alliance in Uttar Pradesh a few years ago. He criss-crossed through the state wearing a black jacket, waving at crowds. The alliance was drubbed," said Modi referring to Rahul Gandhi, whom he did not mention by name.

Gandhi had entered into a belated alliance with Akhilesh Yadav-led Samajwadi Party in 2017 and held a joint campaign marked by roadshows with the catchphrase "UP ko ye saath pasand hai (UP likes this coalition)".

The BJP went on to register an unprecedented victory in the state.

"Beware, that yuvraj is now in Bihar, lending his support to 'jungle raaj ke yuva yuvraaj'. On the one hand, there is development brought in by the double engine government of the NDA which has pulled Bihar out of the darkness of the lantern age.

"On the other there are these double-double yuvraj with the sole agenda of saving their thrones," Modi said referring to RJD's chief ministerial candidate Tejashwi Yadav and Rahul Gandhi.

At his final rally in Bagaha, a remote part of West Champaran district, the prime minister also appealed to voters of all those places in other parts of the country where by-polls will be held on November 3 and for which campaign ended on Sunday evening to vote in large numbers and help the NDA achieve victory.

By-polls are scheduled in, among other places, 28 assembly seats of BJP-ruled Madhya Pradesh where a victory is crucial for the Shivraj Singh Chouhan government which was installed recently after the one led by Congress's Kamal Nath fell following defections by supporters of Jyotiraditya Scindia.

The prime minister dwelt at length on economic progress made in the country and Bihar in particular, and drew the contrast with the "lantern age" that prevailed during "jungle raj" an allusion to the RJD rule which faced allegations of abysmal law and order situation and lack of basic infrastructure like roads and electricity.

The prime minister who shared the stage with Chief Minister Nitish Kumar, urged the voters to support the NDA's "double engine" a term he has been using to denote the advantages of having the same coalition ruling the Centre as well as the state.

He also asked the people to shun the five-party Grand Alliance, of which RJD and Congress are the two largest constituents, "like food that has caused indigestion, vomiting and loose motions".

Modi also made an indirect reference to the controversial remarks made by Pakistan minister Fawad Chaudhry on the floor of the national assembly and claimed "the neighbouring country has admitted to its involvement in the Pulwama terror attacks". 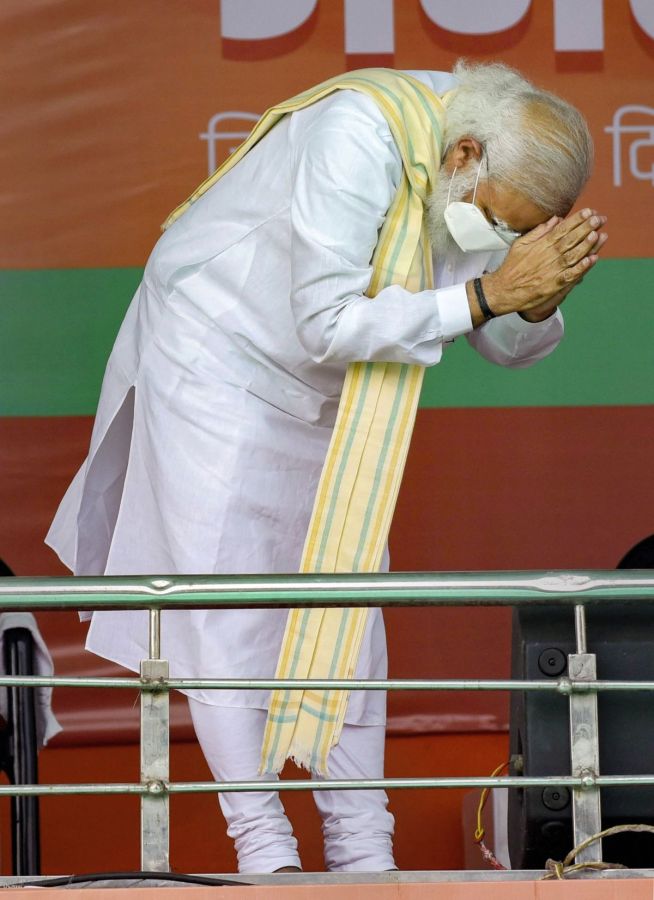 "The mask is also off the faces of those who were demanding proof, caring little for our jawans, many of them from Bihar, who had lost their lives in the suicide bombings," said Modi referring to the Congress's skepticism over the Balakot air strikes that followed the attack on the CRPF convoy in Jammu and Kashmir.

At his Bagaha rally, Modi also spoke about the NDA's role in granting Scheduled Tribe status to Tharus who populate the remote area bordering Nepal and lambasted the opposition for "lying to the people that we are out to scrap reservations for SCs and STs when, in fact, we extended quotas by another 10 years".

Referring to the construction of Ram temple at Ayodhya, he said, "This is an occasion for celebration, but we must not also forget those who had tried to put hurdles in our way by raising questions on the very existence of Lord Ram".

Incidentally, doubts had been raised about the disputed site being the place of birth of the deity before the Supreme Court by Kapil Sibal, a senior Congress leader who had appeared as a counsel for the Sunni Waqf Board.

"They have been peddling one lie after another with an innocent face. They said Jammu and Kashmir will be on fire with the scrapping of Article 370, rivers of blood will flow. The people there are heaving a sigh of relief and looking forward to progress unhindered by rampant corruption," Modi said.

"They similarly said that many Indians will lose their citizenship on account of the Citizenship Amendment Act. One year has passed and not a single person has met such a fate," Modi said referring to the country-wide protests that had erupted since the legislation was tabled before Parliament.

In an oblique reference to the inclusion of ultra-Left CPI(ML) in the Grand Alliance, Modi warned people against those responsible for jungle raj joining hands with supporters of naxalism and the "tukde-tukde gang.

At a rally in Chapra, the prime minister congratulated Seychelles' Wavel Ramkalawan, whose ancestors had migrated from the neighbouring Gopalganj district as indentured labourers, on his election as the president of that country.

"Bihar has left the darkness of the jungle raj far behind as is moving towards achieving even greater
development," he said.

Addressing an election rally in Chapra, he also sought to appeal to Bihari sensitivities by speaking about 'chhath' puja, saying their "son" will ensure that kitchen fires are kept burning despite the COVID pandemic.

Addressing another rally in Samastipur, Modi said on one side of the political divide was the NDA which was committed to democracy and on the other an alliance devoted to dynastic politics.

"Has any relative of (Bihar Chief Minister) Nitish Kumar... son, uncles, anyone been sent to Rajya Sabha? Do you find any relative of Modi in Parliament?" he asked the audience which cheered him lustily. 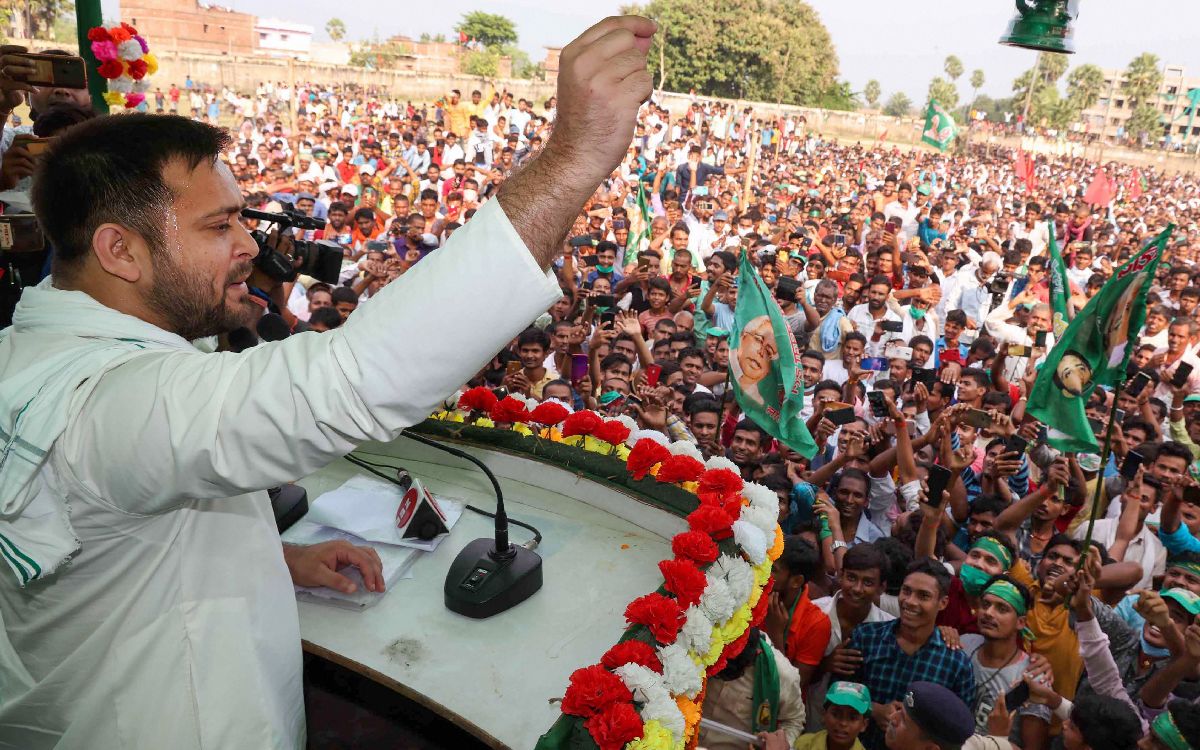