He is hopping from one region to another daily to drum up support for the Grand Alliance so that he could become the chief minister of Bihar, but winning his own seat won't be easy for Tejashwi Yadav who is up against an experienced Bharatiya Janata Party rival in Raghopur constituency. 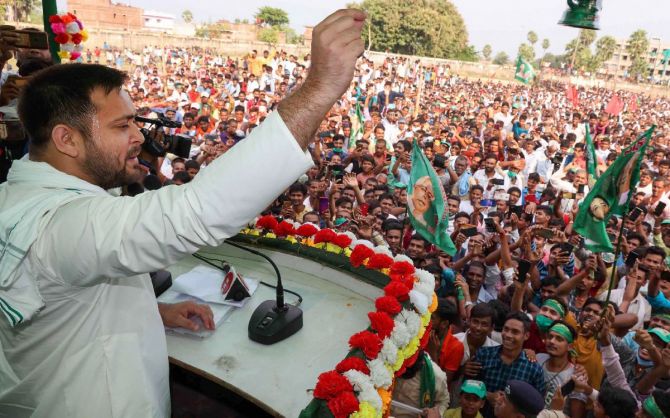 A part of the Hajipur Lok Sabha seat, Raghopur assembly segment in Vaishali district will vote in the second phase on November 3.

The 31-year-old, the younger son of Lalu Prasad, had taken the electoral plunge from Raghopur in 2015, when he had barely reached the qualifying age of 25 for fighting polls.

He won the election and went on to become the deputy to Chief Minister Nitish Kumar, whom he would call chacha (uncle) then, an expression of respect and alliance. But the alliance fell apart in 2017, and now Tejashwi is challenging his chacha for the top post.

The Grand Alliance, spearheaded by the Rashtriya Janata Dal and with the Congress and Left parties as its members, has already announced Tejashwi as its CM candidate.

But from being a CM candidate to actually becoming the one depends on whether Tejashwi wins his won elections.

Raghpur seat is a Yadav-dominated constituency across river Ganga which Lalu Prasad had won in 1995, 2000, and his wife Rabri Devi in 2005.

Kumar, however, had lost to Tejashwi in 2015, when Tejashwi was a nominee of an alliance comprising his RJD, the Janata Dal-United and the Congress, while the BJP had gone solo.

The equation has changed since. The JD-U is back with the BJP and the RJD is in an alliance with the Congress and the Left parties.

Tejashwi and Satish Kumar are among 12 candidates in the fray from Raghopur seat in the 2020 Bihar polls.

While, Satish is canvassing across the constituency daily, Tejashwi has not been able to devote much time because he is busy criss-crossing the state as an RJD star campaigner in the absence of his father Lalu Prasad, who is serving a jail term in fodder scam cases.

Tejashwi had addressed a gathering of his supporters in Hajipur on the day of filing nomination on October 14, and told them that they would be electing a chief minister.

Tejashwi returned to Raghopur on October 29 to seek support from the voters.

LJP's Rakesh Roshan is also active, but the BJP nominee is taking him lightly, terming him a vote katua (one who eats up rivals' votes but does not benefit from it oneself), and also claiming that he is not getting the support of even Paswans, traditionally an LJP support base.

While over 1.30 lakh Yadavs form the bulk of the voters, the constituency has a significant presence of upper caste Rajputs, whose electorate size is estimated at around 40,000 followed by Muslims 22,000 and Paswans 18,000.

On the face of it, it seems being a son of Lalu Prasad, Tejashwi will not find it difficult to win the seat.

But, Satish Kumar, also a Yadav, is no pushover.

He is contesting from Raghopur seat for the third consecutive time.

"He (Tejashwi) has lost trust of the people of Raghopur because he did not do any substantial development work and only cheated voters for five years," Kumar says about his main rival.

"Though he (Tejashwi) is trying to woo Yadav voters by claiming that he is going to become the chief minister after the elections, people are not interested," he claimed.

Asked if Tejashwi has the edge because of the fact that his father is the tallest leader of Yadavs in Bihar politics, Kumar told PTI, "The achievements of Prime Minister Narendra Modi at the Centre and Nitish Kumar in Bihar will comfortably see me through."

Union Minister of State for Home Nityanand Rai, also a Yadav, has a great influence among the caste, which is an advantage for the BJP candidate.

"If Lalu Prasad's name guarantees win for his sons, why Tej Pratap flee to Hasanpur from Mahua in Vaishali? Even Tejashwi was planning to shift to some other constituency, but was given a false believe by his advisors not to do so as he will win from Raghopur by hoodwinking people in the name of being CM candidate of the opposition," Kumar said.

On LJP's Rakesh Roshan, Kumar said, "Had Ramvilas Paswan been alive this would not have happened. But, the LJP candidate is nowhere in the race as even the Paswan voters are not backing him."

Reports from ground zero suggest that though the LJP nominee is not in a winning position, he is denting BJP's chances by dividing the upper caste Rajput votes.

A scenario that may put Tejashwi at advantage.

But, Ramratan Yadav of Tersia riverine belt highlighted the issues of unemployment and migration.