The BJP's rediscovery of its allies, including the PM touching the feet of Parakash Singh Badal, would be interpreted as the party's efforts to keep its flock together if it falls short of the majority mark on May 23.
Archis Mohan reports. In the run-up to the 2014 Lok Sabha polls, there was a time when senior BJP leaders would regularly meet potential allies at the residence of Shiromani Akali Dal's Naresh Gujral located next to New Delhi's Lodhi Gardens.

The BJP had then believed it might fall short of majority and trusted Telugu Desam Party chief Nara Chandrababu Naidu to stitch together a National Democratic Alliance that eventually came to consist of 27 political parties.

However, these parties felt that the BJP neglected them once it secured a simple majority of its own.

During the Narendra Damodardas Modi government's tenure, either some of BJP's allies have quit the NDA in the past five years or complained of being ignored.

On Friday, April 26, as Prime Minister Narendra Modi filed his nomination papers from the Varanasi Lok Sabha constituency, the top BJP leadership made an effort to reach out to its existing NDA allies.

Nearly all opinion polls have forecast that the BJP could fall short of the majority mark. Currently, the BJP has 40 allies across the country.

'Some people are creating an atmosphere that Modiji has already won (the election) and it is fine not to vote. Please don't fall into their trap. Voting is your right and everyone must exercise it,' Modi said after filing his papers. The four people who proposed his name represent a cross section of Hindu caste structure -- Shukla, a Brahmin, Chowdhary, a Dalit, Patel an OBC and Gupta a Vaishya.

The BJP leadership also hosted a lunch for NDA leaders.

The BJP's relations with some of its NDA allies remained strained in the last few years.

The Telugu Desam Party quit the NDA in 2018, while the Shiv Sena and Akalis have bitterly complained at several times of neglect by the BJP.

The BJP's rediscovery of its allies, including the PM touching the feet of Badal senior, would be interpreted as the party's efforts to keep its flock together if it falls short of the majority mark on May 23.

Currently, the BJP has 40 other allies. Prominent among these are the JD-U, Shiv Sena, AIADMK, Akali Dal, Paswan's LJP, Patel's Apna Dal and Rio's NDPP.

Some of the others are the Pattali Makkal Katchi, the DMDK, the Republican Party of India (Athawale), the Goa Forward Party, the Suheldev Bharatiya Samaj Party and the National People's Party. 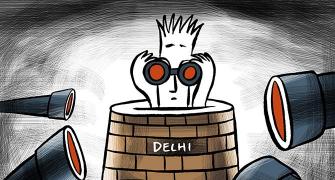 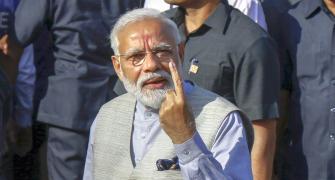 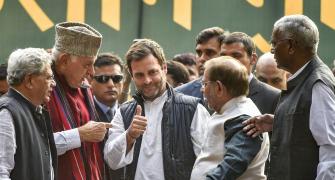 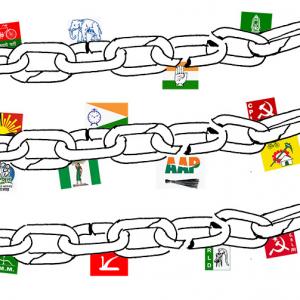