'The narrative that is the ruling party is using on Pulwama is not productive.'
'I do not think Modi and the BJP will get more votes because of that incident and the response to it,' says Aakar Patel. 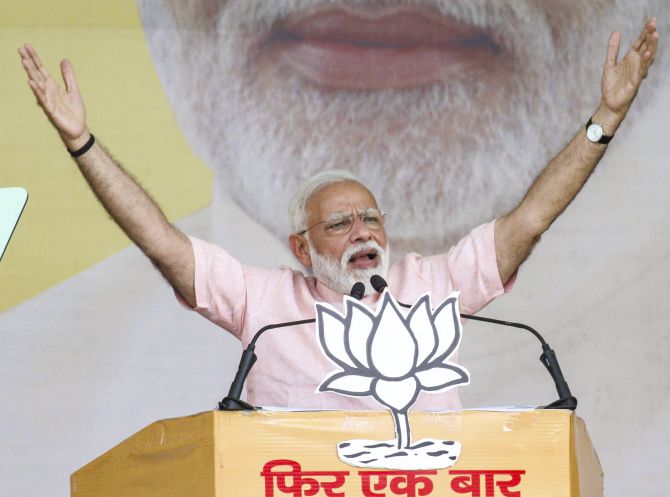 Twenty five ago, Mahatma Gandhi's great-grandson Tushar Gandhi was contesting elections in Mumbai. Standing on a Samajwadi Party ticket, he was opposing the sitting MLA from Bandra East, Madhukar Sarpotdar of the Shiv Sena.

Sarpotdar, who died in 2010, was active in the post Babri Masjid riots against Muslims, and had been arrested twice and found by the army to be carrying a gun. Gandhi was campaigning on foot, and I was a reporter who was following him around.

I asked him what he had learned about the sort of material to use when speaking in rallies.

He said that development issues did not work. He had started his campaign by going to slums and talking about the delivery of services: Water, electricity, roads and jobs.

He soon learned that all parties said more or less the same thing and this did not attract applause from jaded voters. The response of the audience in terms of clapping, shouting and cheering was a good indicator of what people wanted to hear.

Gandhi said that it was when he attacked his opponent and used humour that his audience cheered.

He gave me an example. Sarpotdar was fond of saying that he would play on the front foot, Gandhi would say in his speeches that those who played on the front foot were also in danger of being stumped.

Politicians, particularly those who regularly address large gatherings, are better aware than the rest of us about what are the issues concerning people.

To some extent, but in a different way, journalists also are aware of these things, especially television and Internet journalists. They receive very quick feedback in terms of TRP ratings on what content works and what does not work for their audience.

Newspaper journalists receive instant feedback in a different, slower way and that is one reason why newspapers are less sensationalist than television channels.

A few days ago, Home Minister Rajnath Singh was in Bihar. At his first rally, according to a report, he began by his speech by listing what the Narendra Damodardas Modi government had achieved in five years.

Next he quoted an American think-tank to prove that poverty has been reduced in India. The response to both these things was lukewarm. After this, Rajnath said: '“Bharat kisi ko chhedta nahin, lekin jo chhedta hai usko chhodega nahin (India does not bother any country, but if any country bothers India, we will not leave that country).'

At the next four rallies that he spoke at, in Banka, Purnia, Araria and Madhepura, Rajnath reversed the order of his speech. He focussed on the Pulwama attack, saying that the BJP had given a reply within 12 days and had delivered it inside Pakistan.

What are we to conclude from this and what is it that the voter wants?

So can politicians perceive this more accurately because of the feedback and then focus on that? The answer is not that easy.

The fact is that many people, and possibly most people, go to rallies to also be entertained. They spend hours and perhaps the full day just to attend, and they don't want to be bored by the usual stuff.

Of course, they want service delivery from the state of water and electricity and good jobs. But that is not what they come to listen to, and that is why it is not that easy for a politician to ultimately figure out what is working.

The other thing is that because India's politics is caste-based and community-based, one does not have to be a good orator to be a successful politician.

The truly great orators we have produced are few: Lalu, Thackeray, Modi, Mamata, Owaisi and perhaps a handful of others.

The others, even powerful ones like Naveen Patnaik and Mayawati, do not depend on the popularity of their speeches to retain their power. This means that they do not receive their primary feedback through rallies.

Rallies themselves have become less relevant as outreach tools for parties in today's age of the Internet and television. The rally is merely a stage from which leaders reach a larger audience than the one sitting before them.

I believe the narrative that is the ruling party is using on Pulwama is not productive. I do not think Modi and the BJP will get more votes because of that incident and the response to it.

I do think that they might get good feedback when they use strong language on this subject and call their opponents Pakistani agents, because that is what the audience wants to hear at the gathering.

It is not ultimately what most people will decide to vote on.

At a time when India has agrarian distress and record unemployment, the government cannot credibly talk about its economic record. The prime minister must therefore talk about the magic of his surgical strikes and the treachery of his political opponents.

This is entertaining to his audience, particularly those who are aligned to his ideology, but it is not correct to assume that this is the basis for how people will vote.

Tushar Gandhi entertained a lot of people in Mumbai in that campaign. However he not only lost that election, but if my memory serves me rightly he also lost his deposit.