'A full majority might please the stock market for a couple of days, but the damage it usually does over five years is too high a price to pay,' argues Aakar Patel. 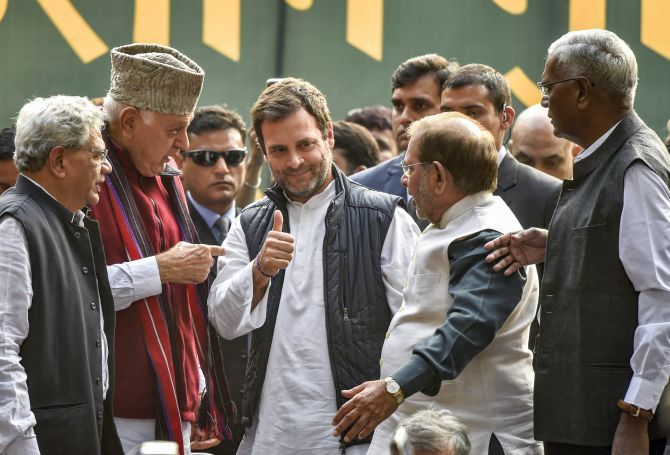 Voting day will soon be upon us. I have been reflecting on it and thought I should share a few things that occur on the subject.

The first thing is that voting has become easy for us Indians. I have zero engagement with the state before the date of voting. I go online to see whether the Election Commission still has me registered, and I take down the sequence number that has been allotted to me.

I handwrite my own chit, instead of stopping outside the voting area to take it from one of the party desks. And I step straight into the polling booth.

For some reason, the booth that I get, and it is always the same one, is usually empty. I go pretty early in the morning and that might be one reason but not the only one.

It seems to me that the one next to it has more people queued up. For me (I live in South India), the date for voting is April 18, which is a Thursday, and I expect that the queue may be longer because the middle-class neighbourhood I am in will have lots of people wanting to vote and be off to work.

Having voted, I always feel a sense of relief and accomplishment. I think most voters will feel it. I make no real effort to clean up the ink mark on the finger and almost put it on display, as one might a tattoo.

Given how smooth all of it is, I wonder why we still have such a spread-out election. It is anti-climactic.

Anyway, the second thing that occurs to me is that I almost never vote for the party that wins. I began voting for the Bahujan Samaj Party decades ago, and neither in my home state of Gujarat, nor in my adopted homes of Mumbai and now Bengaluru has the party any real presence.

That doesn't matter to me. What does matter is that I feel comfortable with the way I voted and can sleep in peace. This I can do.

I have never ever regretted the way I have voted and I do not think for one moment that my vote is wasted.

Having declared my political affiliation I think I am in the position to comment on India's political divide while pretending to be neutral (I accept that many will not see it this way).

That brings me to the third point, which is associated with the one above. It is about what is happening around us. I do not accept that there are sides or positions to be taken in our political discourse. What I mean is that there is no Left or Centre or Right to be discerned in India.

What we are looking at is straightforward majoritarianism. To call it Right would be to dishonour the long and distinguished tradition of Conservatism, which Hindutva is not and does not claim to be.

We have a political party in power that is implementing its ideology and agenda of dividing our nation and our society on the basis of faith. To me that is unacceptable as a starting point.

Whatever claims are made about the qualities of the ruling party must follow after it is made to acknowledge that its ideology is dividing us and that there are real victims of its agenda. To overlook this would be to close one's eyes to what is going on around us and I cannot do that.

To not do this is to endorse what it is doing, not only on the fronts that you and I might see as being admirable (for example trying to undo dynastic politics) but on all fronts including the nasty stuff.

It always interests and concerns me that large parts of what we call the Indian middle class has the capacity to overlook this by saying 'yes, but'. Meaning that they can in some sense see that the murder of another human is bad, but they also have the ability to see the other side (for instance that animals should not be butchered or that women must be kept out of temples).

How are they able to do this, I wonder. Surely they are not monsters who can watch videos of Indians getting lynched without being affected.

The fourth point is that, whoever wins, I hope there is a coalition government at the Centre. There is no evidence to show that strongman leadership is any good for us or for any other country.

Indeed, random acts of genius like demonetisation or the surgical strike are less likely to occur if there is restraint on the Union leadership.

A coalition and particularly a broad based one offers more levers for civil society and society in general to influence what the government does and does not do.

A full majority might please the stock market for a couple of days, but the damage it usually does over five years is too high a price to pay.

I have no fear at all of a fully multi-party, rainbow coalition either, and in fact I think it would be desirable in such a diverse nation.

The last thing is that after a few years of reluctance, I will be doing television again. Admittedly, this is more for the money than any particular interest. However, there is another reason also.

What I have to say may be banal, but I think it is important in this era to say it. Sword of State Tyranny is Upon Us