A 31-year-old man has been arrested outside United States Vice President Kamala Harris' official residence in Washington, DC on weapons and ammunition charges, according to media reports. The arrest comes as the district is in a state of heightened security following the January 6 insurrection attempt at the US Capitol.

Harris and her husband, Doug Emhoff, do not currently live at the Naval Observatory, as the official residence of the US Vice President is undergoing renovation. The couple is living at Blair House, near the White House.

The Texas man was detained by US Secret Service on Wednesday following an intelligence bulletin, a spokesperson for Washington's Metropolitan Police was quoted as saying by CNN.

Police said the officers arrested and charged Paul Murray, of San Antonio, and that a rifle and ammunition were recovered from his vehicle, it said.

A police report shows officers allege Murray was in possession of an "AR-15 semi-automatic rifle, 113 rounds of unregistered ammunition, and five 30 round magazines."

The US Secret Service told CNN in a statement that Uniformed Division officers detained the man before Metropolitan Police arrived on the scene.

A Secret Service official said none of the agency's protectees were at the residence at the time of the incident.

Violent pro-Trump supporters, fuelled by the belief that President Biden and Harris had stolen the election from Donald Trump, stormed the Capitol on January 6, threatening lawmakers and law enforcement officers. Five people, including a police officer, were killed in the violence.

Since the violent incidents, security and intelligence officials have often warned about the dangers of homegrown extremism in America. 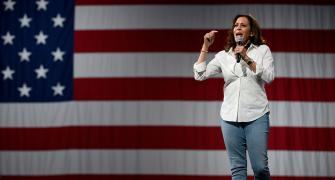