Goes to show that Kamala is a woman of action! IMAGE: Kamala has been wearing sneakers a long time.
Here she is on June 5, 2011 -- she was California's attorney general then -- wearing black and white sneakers at the annual Kidstock To Benefit One Voice scholars programme in Beverly Hills, California. Photograph: Michael Kovac/Getty Images for One Voice IMAGE: Kamala at the For the People rally in Davenport, Iowa, August 12, 2019.
The United States senator was then vying for the Democratic presidential nomination. Photograph: Justin Sullivan/Getty Images 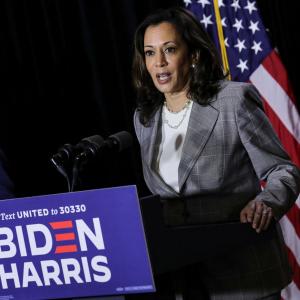