Amid calls, including from some Bharatiya Janata Party functionaries, to boycott Bollywood star Deepika Padukone's upcoming movie Chhapaak for her visit to Jawaharlal Nehru University, the Union government said on Wednesday that not just artistes, even a common man can go anywhere to express their opinion in a democracy like India. 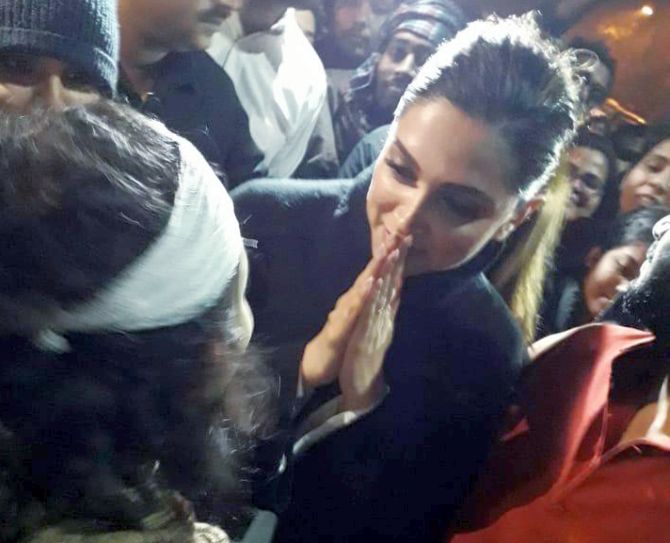 Nobody objected to such expression of opinions, Union minister Prakash Javadekar told reporters when asked at a Cabinet briefing about Padukone's visit to the Jawaharlal Nehru University on Tuesday to express solidarity with the students who were attacked by a mob.

About the call given by some party functionaries to boycott her upcoming movie, the minister said he had not read their remarks but sought to underscore the significance of his statement, saying he is stating so as a minister and a "permanent" BJP spokesperson.

"This country is a democracy. Why only artistes, even a common can go anywhere and express his opinion," the information and broadcasting minister said.

To questions about violence in JNU where masked people attacked students on Sunday night, Javadekar expressed confidence that the ongoing police probe will "unmask" the accused and asserted that violence has no place in a "mature democracy" like India.

"We are a mature democracy and everybody has the right to express their opinion. Violence has no place, especially in universities where people go to study," he said.

Students body Akhil Bharatiya Vidyarthi Parishad, which is affiliated to the Rashtriya Swayamsevak Sangh, has been blamed by several groups for the incident.

It has, however, denied its involvement and blamed the rival Left organisations for the violence.

Javadekar added that some unions in JNU had earlier decided to stop students from registering in semesters.

"We should not forget that this is an important issue. Stopping students from semester admission is anti-education," he said.

Left bodies, which rule the JNU student union, have been accused of preventing students from taking admission in semesters as part of their protest against fee hike.