China remains a "formidable challenge" that has increased its presence not only along India's land borders but also in the maritime domain, Navy Chief Admiral R Hari Kumar said on Tuesday and asserted that the naval force keeps a regular watch in the Indian Ocean Region. 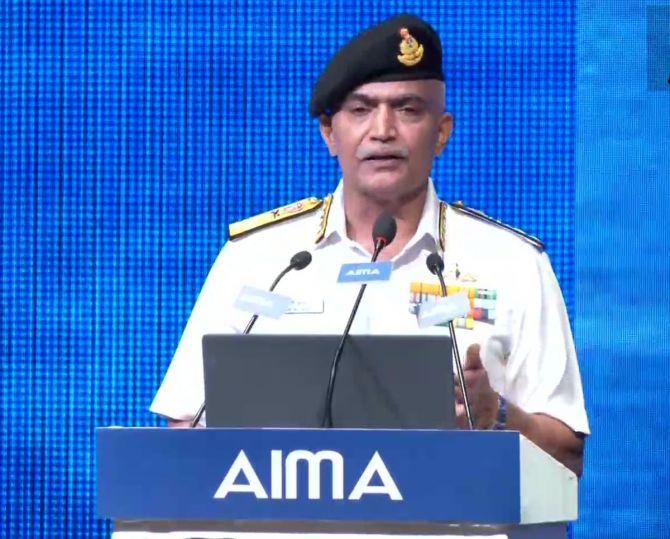 Delivering a keynote address at an event in New Delhi on 'India's Naval Revolution: Becoming an Ocean Power', he spoke of the conventional and other security challenges for the country, and also said that "Pakistan, despite economic constraints, has continued its military modernisation, especially its Navy which is on track to becoming a 50-platform force by about 2030-2035".

"While these conventional military challenges persist, terrorism remains a major security threat, as it continues to evolve in shape, scale and size.

“Staying one step ahead of such an invisible enemy, who will constantly innovate tactics, enabled by niche technologies,  is a challenge that persists," the Navy chief said.

Admiral Kumar said he saw India's contemporary security scenario shaped by a "trinity of '3Is' -- "imperatives at home, influences from outside and some intrusive paradigms".

Emanating from this security environment are the security challenges that India faces, he added.

"While competition is being played out on a daily basis -- at times testing limits -- but without escalating into armed action, a war with potential adversaries can never be ruled out.

"In this regard, China remains a formidable challenge and has increased its presence, not only along our land borders but also in the maritime domain by leveraging anti-piracy operations to normalise its naval presence in the Indian Ocean Region," the Navy chief said.

Later, in an interaction on the dais, he said that China has been in the Indian Ocean since 2008 and has built a military base in Djibouti. It is also involved in developing various ports in the Indian Ocean in Sri Lanka, Myanmar and Pakistan and other countries.

"At any point of time, there is about, anything between 5-8 Chinese Navy units, be they be warships, Chinese research vessels or a host of Chinese fishing vessels operating in the Indian Ocean Region.

"We keep a watch on them, their activities in the Indian Ocean Region," the Navy chief said in response to a question on China as a security challenge in IOR during the interaction.

Admiral Kumar said Indian Navy flies aircraft sorties, and ships are deployed almost round the clock to keep an eye on the Indian Ocean Region.

He, however, said that capability plans and development are not based on a particular country or nation, but it is "based on our requirements to protect, preserve and promote our interests in the maritime domain".

In his address delivered at the 49th National Management Convention of All India Management Association (AIMA), he also said: "Apart from these diverse threats -- that invoke our military role -- the challenges imposed by piracy, arms and drug smuggling, illegal immigration, etc, invoke our constabulary role and, thereby, expand our responsibilities further."

"We all need to understand that the wars of tomorrow will not only include the high seas but straddle multiple domains. The battlefield will transcend physical boundaries. It will be fought over the seas, on land, in the air, in the information domain, in the digital world, and even in our minds," the Navy chief said.

Asked about the lessons from the Russia-Ukraine conflict, he said, it is easy to start a conflict, but difficult to bring it to a conclusion.

They say a nation goes to war for three reasons -- fear, honour and interests. "We see all three in the special military operation by Russia."

From the naval perspective, there are issues of blockade, food grain crisis and disruptive and modern technology at use like drones in this scenario.

"But, the way social media has been used in this case, it is like never before. We don't know which side to believe. The weaponisation of cognitive domain is very evident here. Besides, lessons in logistics are also to draw from it," he added.

On self-reliance of the Indian Navy, Admiral Kumar in his address said, the force "embarked on its quest for self-reliance and indigenisation" with the construction of INS Ajay in 1961.

"You would be happy to know that while the 29 ships commissioned in the last seven years were all constructed in India, 38 out of 40 ships presently under construction are also being built at Indian shipyards, and a further 39 ships under contract conclusion, will similarly be indigenous. Our aim is for the Navy to be fully Aatmanirbhar by 2047," he said.

It should be clear that India's growth trajectory in the Amrit Kaal is "inextricably linked to the oceans", and will be shaped by her ability to harness the seas, the Navy chief said. 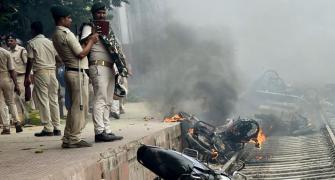 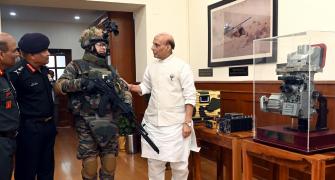 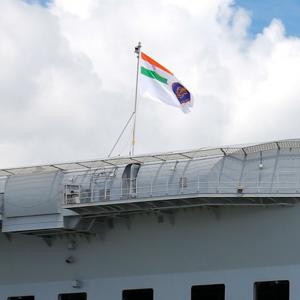 An Unforgettable Day For The Indian Navy