'Am contesting polls to deny BJP a cakewalk'

'Rahul Gandhi was given the impression that if the seat was given to me, then the alliance would be broken in all 40 seats.' 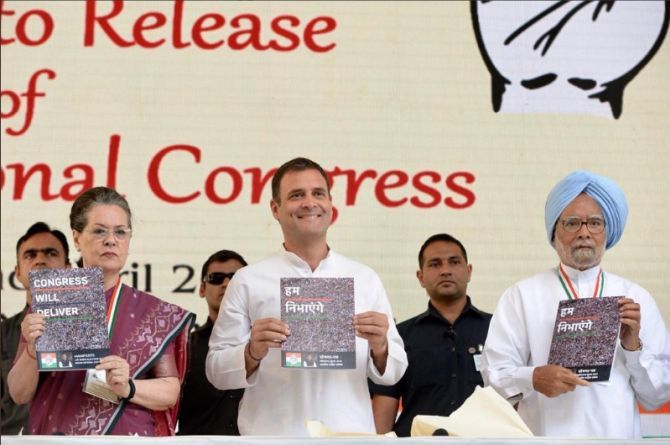 The Mahagathbandhan of Opposition parties got a jolt when senior Congress leader and former Union minister Dr Shakeel Ahmad filed his nomination papers from Madhubani constituency in Bihar as an Independent candidate.

Dr Ahmad was unhappy after his traditional seat of Madhubani went to the Vikassheel Insaan Party under the Mahagathbandhan's seat-sharing formula.

"If we allow the Mahagathbandhan candidate to contest the election in Madhubani, then the BJP will win this seat easily," Dr Ahmad, below, tells Rediff.com's Syed Firdaus Ashraf.

You have put the Mahagathbandhan in Bihar in a crisis of sorts after deciding to contest elections as an Independent.

There is no crisis among alliance partners in Bihar.

If we allow the Mahagathbandhan candidate to contest the election in Madhubani (the Lok Sabha) seat, then the BJP will win this seat easily.

Our alliance in Bihar is to ensure the BJP's defeat.

At the moment the alliance candidate (the Vikassheel Insaan Party's Badri Kumar Purbey) is weak.

He is an outsider to Madhubani.

He has not even contested elections ever.

Therefore, I am contesting the elections, so that the BJP should not get a cakewalk.

Now, the word in my constituency is that it is a fight between Shakeel Ahmed and the BJP candidate.

(Interrupts). I have filed my nomination as a Congress candidate.

In Chatra, we have alliances with the JMM (Jharkhand Mukti Morcha) and the RJD (Rashtriya Janata Dal).

In Jharkhand, there are 14 (Lok Sabha) seats.

Seven seats are with the Congress, the JMM has got four seats, Babulal Marandi's party (Jharkhand Vikas Morcha) has got two seats and one seat is with the RJD.

But the RJD still has put its own candidate, Subhash Prasad Yadav, in Chatra against Congress candidate Manoj Kumar Yadav.

They say it is a friendly fight.

Therefore, I have requested the Congress president (Rahul Gandhi) that I should also contest in a friendly fight from Madhubani.

There is a constituency in Bihar, Supaul, where we have a sitting MP Ranjit Ranjan.

She is the wife of Pappu Yadav.

In Supaul, the RJD has fielded its Independent candidate (Dinesh Prasad Yadav) by supporting him openly.

So while filing papers as an Independent candidate, I have said to my party that let me contest the election like in Chatra or like that in Supaul.

Therefore, I am not against the Mahagathbandhan.

Even if I win, I will not leave the Congress and join the BJP.

I want to strengthen the hands of Lalu Yadav and the Congress.

Which symbol will you contest the election on?

I am asking for the Congress symbol. 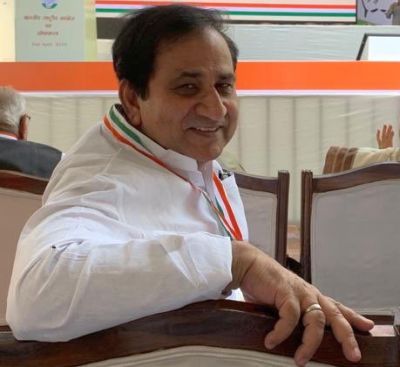 I am surprised that despite being a big Congress leader, you had no idea about your ticket being given to another party in Madhubani.

I was not involved in the Mahagathbandhan negotiations.

Rahul Gandhi tried his best for my candidature, but it was too late.

He was given the impression that if the seat was given to me, then the alliance would be broken in all 40 seats.

Here in Madhubani, there is no RJD presence.

They (RJD) had no candidate, so they got an outsider to contest polls.

What is the reason that their candidate is contesting the election in Madhubani in spite of your presence?

This answer can be given only by those who have given them a ticket.

But the people of Madhubani know the fact.

It is better that I don't speak about this issue.

Have you resigned from the Congress?

I am very much a part of the Congress.

Don't you think the party will take action against you as you are going against its diktat?

Why should I think negative?

I am requesting my party that I want to contest an election.

I resigned as the senior spokesperson of the party.

I did not resign in protest.

I resigned as spokesperson because I am going to speak on the local issues of Madhubani.

If I don't do that, then people will think this is the national stand of the Congress party.

There should be no confusion on this matter.

Therefore, I resigned as senior spokesperson of the party.

When you have not contested elections for the last 10 years, why are you insisting on doing so now?

The Mahagathbandhan was stuck because of me.

I refused to contest the election then as I didn't want the Congress-RJD alliance to suffer in Bihar.

It is known to one and all.

This time I am concerned because the alliance candidate is weak and the BJP will not even need to campaign for the elections and yet they will win.

He is the weakest possible candidate in the Mahagathbandhan.

The RJD got Abdul Bari Siddiqui in this seat and the BJP won here.

This time he (Siddiqui) has gone to Darbhanga to contest the polls.

If the RJD had a candidate I would have not contested this election.

Let me tell you, Lalu Prasad Yadav's supporters will all support me.

Doesn't your move give an impression that the Congress does not give ticket to Muslims -- just like the BJP?

It is not true.

The Congress is fighting to save secularism in India.

Even if I am going to contest elections as an Independent, I will work for the Congress and the alliance.

My grandfather was a Congress MLA in 1937.

My father was a five-term Congress MLA.

I have put my prestige at stake.

I have done this to save secular forces.

It is being said RJD leader Mohammad Ali Ashraf Fatmi will also contest against you as an Independent.

He is not a fool, but a very samajdhar (wise man).

He keeps changing his statement every hour.

He has only one ambition, that I must withdraw from Madhubani so that he can come and contest elections.

He wants to do that just to disturb Muslim votes in Madhubani.

I am a local man and a two-time MP from here.

Now if he has not got a ticket from Darbhanga on a RJD ticket, then he must contest elections from there as an Independent.

Why should he come here and contest as an Independent candidate?

On Tuesday, Congress leader Navjot Singh Sidhu said Muslims must vote for the Congress and not for people like (All India Majlis-e-Ittehadul Muslimeen chief) Asaduddin Owaisi..

He said it because Owaisi is only a one-member party.

Owaisi's party is restricted only to Hyderabad.

When he goes to other parts of the country to campaign, then the entire atmosphere of India gets communalised.

Owaisi must understand that.

I play badminton and go to gymnasium with him.

But at the same time he must know that the country should not get communalised because of him as it only benefits the BJP. 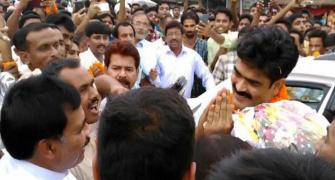 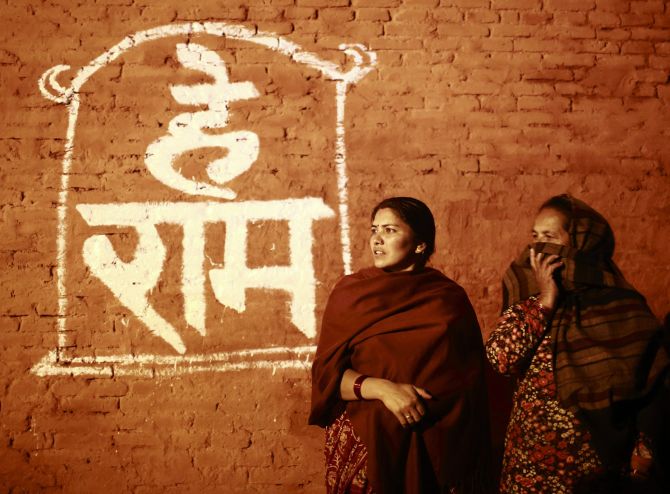 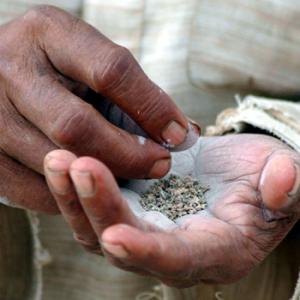