'These guys did not even issue an apology to me and were taken back into the party.'
'They were reinstated on the grounds that they will contribute to the Congress campaign.' 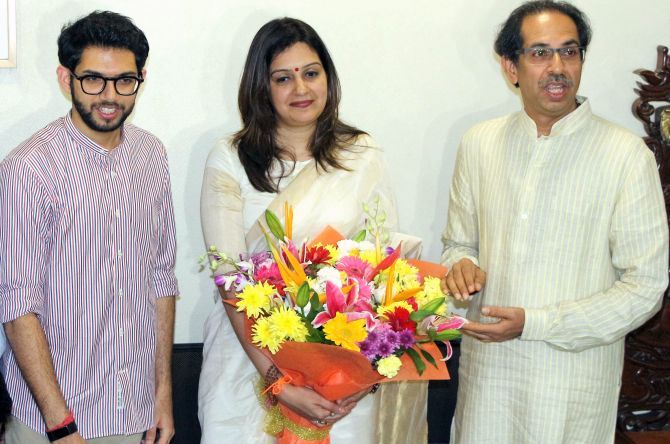 Politics is the art of the possible and it was proved on Friday, April 19, 2019, when Congress spokesperson Priyanka Chautrvedi quit the party and joined the Shiv Sena.

Priyanka was unhappy with the reinstatement of some Congress workers in Uttar Pradesh who had threatened and misbehaved with her at a press conference in Mathura last September.

Her decision to abandon the Congress was a shocker since she took on the Sena's ally, the Bharatiya Janata Party, with gusto. She also mocked Union Minister Smriti Irani over her degrees -- or lack of it -- with a parody song.

"I may have left the Congress party, but nobody can take away the Congress ideology from me," Priyanka Chaturvedi tells spoke to Rediff.com's Syed Firdaus Ashraf.

You have always admired Congress pluralism. Now that you have joined the Shiv Sena, a Hindutva party, what happens to your pluralistic ideology?

My ideology is the way it is. My issues will continue the way they are.

I speak about a progressive, pluralistic, liberal mindset which will continue.

I do not believe at any point that the Shiv Sena talks about only one religion or supremacy of one religion.

It is going to be a pluralistic society and this is what the Hindu religion has always been about.

This is what dharma also suggests.

Hinduism and Hindutva are different. The Congress always fought against the Sangh Parivar's Hindutva.

There is a difference between the Shiv Sena and the BJP. I have not joined the BJP or the RSS (Rashtriya Swayamsevak Sangh).

You must understand that, electorally too, Mumbai has always been reimposing its faith in the Shiv Sena for governing the local body (the BrihanMumbai Municipal Corporation).

As a Mumbaikar, did you not understand the ways of Delhi politics?

Mumbaikars are straightforward people and say things to your face. Mumbaikars do not play stabbing-in-the-back politics.

We don't intrude into other people's spaces and do not want others to intrude in ours.

There is a difference between cultural, political and value set-up of the two places.

A Mumbaikar tends to speak without thinking of political repercussions. They say things as they see it.

That is what I have learnt to be and I will continue to be like this.

When I was in Delhi, I could feel the difference in culture.

Congress Spokesperson Randeep Surjewala has blamed himself, saying he could not stop your departure as well as of Tom Vadakkan to the BJP.

I honestly don't want to blame anybody for anything. It was a matter of circumstances.

Mr Surjewala was a mentor and he carried forward the entire spokesperson team at a time when the Congress was going through most difficult times.

He brought a lot of talented people in the Congress and help set the party's agenda.

People are leaving because of their own personal grouse on issues that matter to them more than perhaps the party.

And for me it was more about my honour.

He taking the onus on himself is not right. Relationships don't end. There were certain issues that could have been addressed, but they were not handled well.

For me those issues were my idea of the dignity of women.

A woman when she comes into political life sacrifices her (personal) time and her career. She comes with aspirations and (because of) the issues that matter to her.

Issues like women's rights, her dignity and honour are her priorities.

You were a huge asset to the Congress, how could they just let you go?

I left the Congress with no acrimony. A woman politician needs to prioritise issues. No woman should say 'Okay this happened, let it go.'

A woman should stand the ground and say this is the issue that needs to be addressed.

As a Mumbaikar, I am strong headed about these issues.

Did you not try to discuss this with Priyanka Gandhi or Rahul Gandhi?

They were good to me. They all reached out to me.

But addressing those issues was deferred to a later time for whatever reason.

So you did not like the chalta hai attitude on this issue from the Congress leadership?

They were absolutely concerned about the issue. It was about prioritising and they said they will address it.

When the issue happened in September those people were suspended, but were taken back into the party (later).

You know about the harassment I was subjected to in Mathura during a press conference.

My parents belonged to Mathura and they were not allowed to step into that city. They were threatened and publicly humiliated.

My father was voluntarily offering his services to a local magazine in Mathura. He was asked to step down.

My parents did not step into Mathura. My family stood by me like a rock and when those people were reinstated in the Congress, I had to stand by my family.

These guys did not even issue an apology to me and were taken back into the party.

Even if an apology was made, it was not sent to me or conveyed to me. They were reinstated on the grounds that they will contribute to the Congress campaign.

It proves that you (the party) could overlook that unfortunate incident (external link), which for me was a sad moment.

Will you share a stage with BJP President Amit (Anilchandra) Shah, Prime Minister Narendra (Damodardas) Modi?
Will you sing 'Kyun ki mantri bhi Kabhi graduate thi' for Smriti Irani as you did a few days ago?

I will not stop singing. People who have it coming will be made fun of.

At this point, my commitment is to the Shiv Sena and I will be campaigning extensively for its candidates.

(Laughs) One is a Congressi because of one's ideology and value system.

Will we see you as a Shiv Sena MP or MLA in the future?

As of now, I have committed my time to work for the organisation.

I will contribute significantly in organisation building and taking the Shiv Sena beyond Maharashtra and bring in new talent, get better public engagement in times to come.

You left the Congress because 'goons' were re-inducted into the party, but you have joined the Shiv Sena, which some believe is a party of goons?

I find it is extremely unfortunate that such a perception has been created about the Shiv Sena.

You think Mumbai will time and time again elect goons to the municipal corporation?

If a perception is created and pushed forward, it need not be true at every point of time.

Consider that they train 30,000 young girls free of cost and make them independent so that they do not live with fear.

The Shiv Sena provides free sanitary napkins at all BMC schools. It is ensuring inclusion of chapters in syllabi to teach men how to respect women.

They are changing value systems. I think these are the issues I want to talk about.

(Yuva Sena chief) Aditya Thackeray talks about banning plastic and how it is harmful for our environment.

He talks about how youth needs to be given a social life (even) at late night after working late.

This is the Shiv Sena I want to talk about. 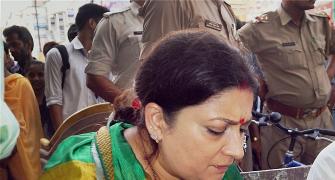