'Maybe 10, 15 years later, Rahul may mature as a politician'

'This business of monopoly of one family must end.'
'Here, they picked up a few leaders for him as he needed support which was okay, but later, they became his cronies.' Tom Vadakkan, a Congress spokesperson who was perceived to be close to Sonia Gandhi recently resigned from the party and joined the Bharatiya Janata Party.

Congress President Rahul Gandhi described Vadakkan as a 'man with no mass following'.

"When you don't have access to the leadership, what are you supposed to do?" Vadakkan asks Rediff.com's Shobha Warrier.

After resigning from the Congress, you said the Balakot attack was the reason behind your quitting the party.
Was it the way the party doubted the attack that made you take such a decision?

Yes, that was the reason.

The Congress was criticising the attack based on what Reuters had said, that there was no attack at Balakot.

My question at that time was, which I felt was very logical, if there was no attack, why did Reuters rush a team to the spot after making that announcement? It was quite evident that they had information that there was an attack.

The second question was, why did the Pakistani administration stop Reuters from going to the spot?

The conclusion was, Reuters was not sure and the Pakistani administration had something to hide.

So, the circumstantial evidence showed that there was an attack at the terrorist camp at Balakot.

I said then and even today that crying wolf all the time when there was a breach of national security was not in the interest of any political party.

You should not politicise everything. You saw an IAF personnel coming back with injuries on his face, but still asking whether there was an attack on the Pakistani terrorist camp and how many people died. This was unwanted.

The point was the government did it and they had the nerve to do it. Let us separate politics from matters concerning national security.

Did you speak to Congress leaders about your reservations?

I did speak to a couple of people who are connected. See, when you don't have access to the leadership, what are you supposed to do?

If you ask for an appointment, you may get it a year or two years later. I mean the top leadership...

I don't want to take names. By the time you get an appointment with the top leadership, the issue will die and the government will change.

So, I spoke to the people who would convey my reservations to the leadership, but nothing happened.

I was defending the party on all issues and was very critical of the government.

The role of the spokesperson is to paraphrase and present the view of the party. You are presenting not your view, but the party's view. So, I was doing a job that was assigned to me.

The difference today is that I can express my views openly.

Was your quitting the party the culmination of so many things that had happened earlier?

I don't consider myself a mass-based leader or anything like that. I have been an activist and I will continue to remain an activist.

The fact is, I had no pressing problem to leave, but there were issues.

I suddenly found the department that I built with pain in the last 15, 20 years getting demolished. It pains you to see that. It is not that anybody in the party was conspiring against me.

But my main issue was I couldn't continue this lying business all the time. I thought, enough is enough and decided to quit. 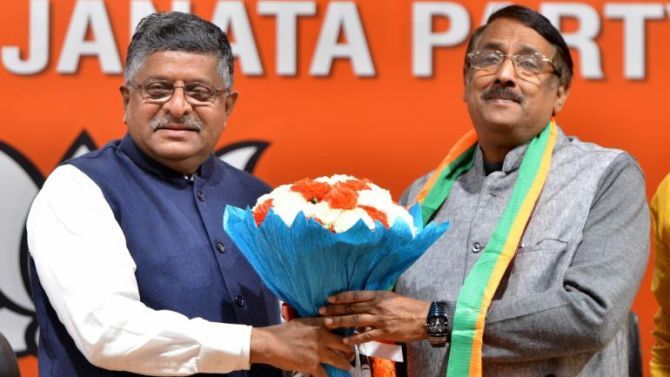 You were with the Congress for more than two decades and you were a spokesperson of the party. You were also known to be close to Sonia Gandhi. From that position to leaving the party, was it a painful decision to take?

I did have sleepless nights. I don't want to talk about my equation with Soniaji. It was a relationship that existed and she inspired me at that time.

Her son has arrived now and I have not seen much of him.

When I don't see my leaders, when I don't know their views, I thought I had no business to be there.

I don't know whether I exist for them. It was like a lawyer with no clients, yet arguing non-existing cases.

I had a client when Soniaji was there.

Did you feel sidelined after Rahul Gandhi became party president?

When the bonding an activist or worker embedded in the party had fails, everything fails.

Maybe 10, 15 years later, he (Rahul Gandhi) may mature as a politician. It happens when you get positions because of your family connection.

Why is the Congress synonymous with one family as if it belongs to the family?

I have asked myself this question many times. The Congress was a meeting point where issues were discussed and its leaders were a cementing force and kept the party together.

But this business of monopoly of one family must end. Ultimately, in a democracy, it has to be an open house.

Here, they picked up a few leaders for him as he needed support which was okay, but later, they became his cronies.

It doesn't mean that if a new sapling is growing, all the big trees have to be chopped off.

I am not saying I am a big tree, but the fact is all the big trees were cut off.

It is not just about me, it is about many senior leaders also.

The fact is, saplings have to learn to live and grow under big trees.

His sister Priyanka has been inducted as a top leader. Why does nobody in the party question this?

Let me answer this in the form of another question. Do you think anybody questioning will survive in the Indian National Congress?

He would become an ex-member and not be in the Congress party. So, how do you expect anyone to question?

I don't have to say anything more. On this issue, you will get a deafening silence from any Congressman.

Quitting the party is one thing, but joining the party you had been criticising all these years soon after is another. Why did you join the BJP?

In many of the television debates I participated, I used to meet the BJP Rajya Sabha member Rakesh Sinha.

Before the programme, we used to discuss many things over a cup of coffee. Then he mentioned something which struck me, which was cultural nationalism. Rakesh Sinha is a member of the RSS (Rashtriya Swayamsevak Sangh, the BJP's parent).

When I read about cultural nationalism, I understood that it is all inclusive; it is nothing about any religion.

It is more about patriotism, which I think is paramount. Belonging to this party or that party is not important; we have to have that ingredient to stay together.

Patriotism is the biggest cementing force.

The propaganda that is there against the BJP is that it is anti-minority, but their desire is to include all minorities.

I want to send out the message that if a person like me, who was the face of the Congress, can join the BJP, it is time for you to have a re-look at the party.

That's why I, a Roman Catholic from Kerala, decided to join the BJP.

Didn't you feel awkward joining the party after criticising the BJP and the government vociferously all these years?

You should distinguish between my views and the views of the party. I told (BJP national President) Amit (Anilchandra) Shah bluntly that I was the spokesperson of a party and all these years, I was doing my job.

My views as a free person is not the views of the party. I would say I have got azaadi now.

If you have to speak for the BJP now, will you have the same azaadi?

No restriction has been imposed on me. Also, I am not their spokesperson.

My position is the BJP is my party now and I have set an example as a person from the minority community by joining the BJP.

How do you, Tom Vadakkan the person with azaadi, compare the Congress and the BJP now?

In fact, I was on stage with (the veteran BJP legislator from Kerala) O Rajagopal the very next day after joining and I got a standing ovation.

I felt very good as I am not in competition with anybody but myself.

See, I have given them a blank cheque and told them to use me in whatever way they see me as useful.

I told them if you want me to contest the elections, I will jump at it. I have not contested any elections so far.

If they want me to campaign in Kerala, I will do that.

If they want me to campaign in the north east, I will do that.

I told them to send me somewhere where I would be useful to the party.

In Kerala, the BJP is looked at as a Hindu party. With Alphons Kannanthanam and you in the party, do you think the BJP is trying to change that image?

I have not arrived as a Christian missionary. I am on a secular platform.

What kind of results do you see in the Lok Sabha election?

The jury is already out. People are wise and they know the truth. They will take decisions based on the ground reality.

All this false propaganda (by the Congress) will not help them. Political parties have to realise that people are wiser and they know who has delivered and what has been delivered.