News
Business
Movies
Sports
Cricket
Get Ahead
Money Tips
Shopping
Sign in  |  Create a Rediffmail account
Rediff.com  » News » 'Why is BJP so scared of Rahul Gandhi?'

'Modiji and the BJP have hoodwinked the nation by their machinations.'
'We have not been able to convince the electorate about Modiji's deceit.' "Rahul Gandhi may be Rajiv Gandhi's son, Indira Gandhi's grandson and Pandit Nehru's great grandson, but is he resting just on these laurels? Isn't he voicing the problems of the country? Isn't he fighting for their welfare?" Sandeep Tanvar -- a member of the All India Congress Commitee who wrote a letter in blood to interim Congress President Sonia Gandhi beseeching her to make Rahul the party president -- asks Prasanna D Zore/Rediff.com in the concluding segment of a two-part interview.

What is the Congress worker at the grassroots rooting for? There is no visible sign of a groundswell of support from party workers for the Gandhis notwithstanding the pandemic.

I must admit that we as a party have some issues at the organisational level because of which we have not been able to strengthen the party at the grassroots.

The biggest reason for this deficiency is the heavy presence of senior leaders, the old guard, and till the time we don't connect with the young blood in the country we won't successfully attract the youth at the grassroots.

In Delhi, after Sheila Dixitji Ajay Makenji made a strong bid to revive the party in the state, but we still lost three consecutive elections. '

Arvind Kejriwalji came to power twice in Delhi at the expense of the Congress.

We have our organisational weaknesses due to which we were not able to articulate our programmes for the welfare of the people or convince them that we are an alternative to the Aam Aadmi Party and the Bharatiya Janata Party.

Our messaging has gone haywire.

Delhi has now become a hotbed of communal politics, which was not the case before. Social media too has been used to flame communal passions.

In the last six years, Kejriwal has not built even a single bridge or done anything for the welfare of the people. People accepted him because of his offers of free water and electricity.

The Kejriwal government has failed big time in containing the pandemic, but because we are weak at the grassroots level we have not been able to expose the incompetency of his government. IMAGE: Sandeep Tanvar's letter in blood which he says is symbolic of Congress party workers's love for Rahul Gandhi

Why did India's young abandon the Congress and gravitate towards Prime Minister Modi and the BJP?

Even you will admit that Modiji and the BJP have established their supremacy over all social media platforms. They have successfully spun a web of deceit, lies and chicanery around the country's youth.

You will find Modiji and BJP are ubiquitous across social media, but you will never find them talking about unemployment, economic slump, the hardships faced by labourers, the farmers, the loss of jobs by the crores or the hunger and poverty gripping our nation.

Rahulji does that. He raises the problems of the people of India away from social media.

The BJP has not unveiled even one successful programme like the MNREGA, about which Modiji kept telling the world that it is a hub of corruption and waste.

Today, the same man is pumping money into MNREGA. It is this vacuous-ness of the BJP that we have not been able to expose and convince the electorate about Modiji's deceit.

India's youth has also moved away from the Congress because the party had been in power for quite long and is facing anti-incumbency.

Then the Anna Hazare movement was successful in impressing upon the youth that the Congress is not working for the upliftment of the people.

If you were to log into Facebook then you will see only Modiji from dawn till dusk (laughs).

Nobody is interested in knowing the grave military stand-off between India and China in Ladakh and how grave the job loss and unemployment scenario is, just to cite a few crises facing the nation.

There is a huge gap between what the BJP portrays it is and what it actually does.

Modiji and the BJP have hoodwinked the nation by their machinations, but I am sure the people will overcome their sway in the times ahead.

Why is it that the Congress always falls back upon the Gandhis? Can't the party find one non-Gandhi who could lead the party?

In Delhi, Sheilaji was the chief minister three times.

In Rajasthan we have Ashok Gehlot, in Madhya Pradesh Kamal Nath, in Chhattisgarh Bhupesh Baghel, and in Punjab Captain Amarinder Singh.

Who says the Congress doesn't have leaders and it is only the Gandhis everywhere?

When you have nothing else to do, you target the Gandhis.

Didn't the Gandhis sacrifice their lives for the nation?

Has Rahul Gandhi left any stone unturned to revive the party and organisation in different states when the Congress has been out of power since 2014?

People vote for the Gandhis because they have a rich legacy of sacrifice and the present generation of Gandhis is sweating it out for the people.

Rahul Gandhi may be Rajiv Gandhi's son, Indira Gandhi's grandson and Pandit Nehru's great grandson, but is he resting just on these laurels?

Isn't he voicing the problems of the country? Isn't he fighting for their welfare?

Compared to Rahulji, aren't there sons and daughters of leaders from other parties who are enjoying the spoils of power without doing anything to deserve what they are doing?

Rahul Gandhi is an easy target, but the man is so humble and grateful to have earned the love of the people and the warmth of those who he is fighting for.

Why is the BJP and the godi media so scared of Rahul Gandhi?

What happens to the Congress if Rahul Gandhi refuses to become the party president and prefers fighting for the people without undertaking any organisational responsibilities?

That will be his decision. Whatever he decides, we as loyal soldiers of the party will stand behind him like a rock.

But as loyal party workers we also beseech him to take the reins of the Congress party in his hands and we will work with him for the party's glory.

For us, there is nobody better than Rahul Gandhi to lead the youth of the country. He has all the qualities of a great leader and love of the people of India.

Whatever the situation today, whatever the media and the BJP thinks about him, howsoever social media portrays him, Rahul Gandhi will remain our leader.

The BJP may have better organisational strength, better election strategy, better funds, but we have given them a run for their money in state elections.

People did accept Rahul Gandhi in many states as their leader and voted the Congress to power and a non-Gandhi was always made the chief minister.

Rahul Gandhi has huge acceptability in India and if not today, then tomorrow, Rahul Gandhi will become the party's president. 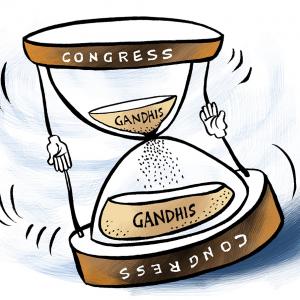