News
Business
Movies
Sports
Cricket
Get Ahead
Money Tips
Shopping
Sign in  |  Create a Rediffmail account
Rediff.com  » News » 'We have to respect dissent'

'In a democracy, there is nothing like 'I am right'.'
'You can be wrong, so somebody has to point that out.' "It is not good for our country to keep people in fear and the feeling of living in an uncertain future," Adoor Gopalakrishnan, arguably India's finest film director, tells Neeta Kolhatkar.

You said dissent should be allowed. Yes, through dissent, new paths are led, but this dissent is being curbed. Indians don't seem to encourage dissent.

A few can't decide for all what decision should be taken.

There are families like that, but there are also good families where decisions are taken together, even with children.

They are treated by individuals, not like 'I am the head. You have to listen to me.'

Their views can differ, but it is respected.

A politician decided to send you to Pakistan when you spoke about the current intolerance in the country.

Laughs. It was a silly person making a comment, not to be taken seriously. It is not the opinion of the party or anything.

When we speak of dissent, it is the basis of any culture. But it is not being allowed today in our democracy.

We have to respect dissent, it is basic.

When somebody praises me, I am very wary about it.

When somebody criticises me, I listen to that, because I learn from criticism, not from praise.

Also, I cannot be right all the time.

You may have the right things, but you need to take the consensus of all the people, that we don't see happening.

In a democracy, there is nothing like 'I am right.'

You can be wrong, so somebody has to point that out.

In a country where there is a democracy equivalence, the majority party needs to listen to the others and the Opposition.

All parties, because they too have been elected by the people.

There has to be a consensus of the people, there can be varied opinions.

We don't see that happening in our political process today.

Yes, even in that Citizens (Amendment) Bill, the smaller parties asked the government to send it to a parliamentary committee, but it was rubbished by the majority.

It was simply passed.

It should have gone through the committee and opinions taken from those who are experts or have knowledge of this subject.

If they had gone through the select committee, there would have been no problem.

Then no wrong decisions would have been taken.

Isn't it interesting to see the majority being made to feel threatened by the minority Muslim community? How is this narrative of fear being perpetuated?

Smiles. That is not good. It is not good for our country to keep people in fear and the feeling of living in an uncertain future.

Back in the villages people are saying we are Muslims so we will be thrown out and lose our homes.

It is everybody's country.

In fact, the protests in large numbers are by students and women, not just Muslims. It is an issue of our country, not just one community.

Fortunately, the protests are not being done by Muslims alone.

That's why Shashi Tharoor said it is not a protest by Muslims, it is our problem.

It is our country's problem, it is not the Muslims's problem.

It should not be communalised.

It will be very dangerous if it is communalised.

I don't think it has affected the creative fields.

If we can surmount small little negativities, it can make an impact.

The artist does not wait for the most opportune moment to take place.

They create against all kinds of odds and adversities.

When we compare our creative people to their counterparts in the US or elsewhere, we see a difference. The influencers there speak fearlessly against wrongs of their leader, here they take selfies and remain silent.

Creativity is something personal.

Somebody else cannot foster or stop your creativity.

They can create impediments, like if I make a film they can censor and ask you to cut scenes and dialogues, they can do that.

But we find ways of circumventing it as creators. Smiles.

Now we don't get trapped by their demands.

That's how Iran has been making some brilliant films.

There are so many restrictions about their films, yet Iran has been on the top for so many years.

The same with all the East European films.

Somewhere it is a challenge as it propels you to invent things.

Your cinema, your stance, being a rebel, does it pose problems for your daughter and son-in-law who are IPS officers in Maharashtra?

No, why should it?

They are doing their job and I am doing mine.

They are in completely different fields.

There is no family in it.

I cannot go and sit there to see the files, can I?

I cannot do that.

I am not in politics. I am a creative person, or at least I think I am creative. Laughs.

I speak what I feel and see what is going on. 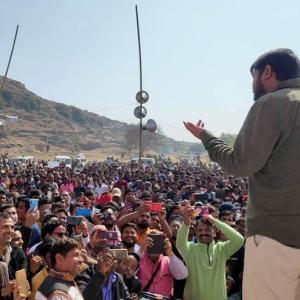