Why Anglo-Indians feel let down by Modi

'We fear worse things to happen. We feel this is just a teaser.'
'I wonder whether later, the Christian community will be targeted.' 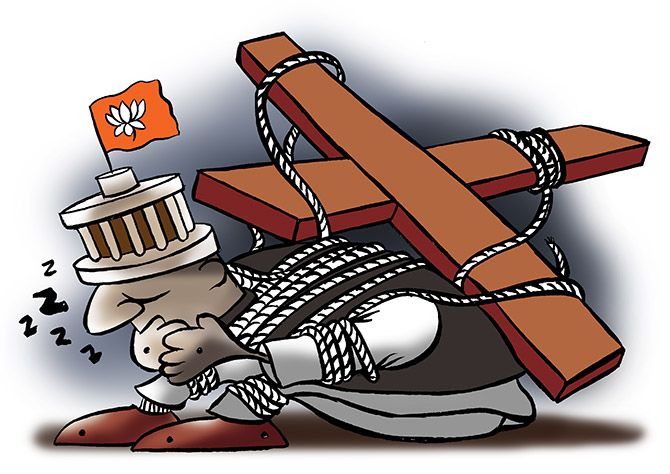 The Bharatiya Janata Party government's decision to scrap reservations for Anglo-Indians in legislatures, which has been in existence since the British Raj, has shocked the entire community.

Adding to their ire is Law Minister Ravi Shankar Prasad's statement that there are only 296 Anglo-Indians in India! The minister made this remark while introducing the Constitution (126th Amendment) bill in the Lok Sabha doing away with the reservations for Anglo-Indians even while extending the same for scheduled castes and scheduled tribes by another 10 years.

"We never expected this from a minister. Still we trust Mother India and her children. We hope better sense would prevail," Ignacius Gonsalves, below, an Anglo-Indian from Ernakulam and a former journalist with the Malayala Manorama newspaper, tells Rediff.com's Shobha Warrier.

The government has decided to scrap the reservation for Anglo-Indians in legislatures that was to end on January 25, 2020, during which Law Minister Ravi Shankar Prasad said there are only 296 Anglo Indians in India. Is it so?

It is a terrible let-down and a blatant lie. One wonders why such a terrible lie was paraded in Parliament against such a small community that has rendered yeoman service to the country beyond the proportion of its numerical strength.

In every field of activity, we have excelled. You take the decorated people in the armed forces, the martyrs. You will find many names from the Anglo-Indian community.

One thing that wounds us is because we are Indians by choice. After 1947, when countries like Canada, Australia, New Zealand etc were welcoming us with open arms.

And so many of them migrated to these countries at that time. Even to the UK.

Yes, so many of them migrated. They did so not because they had nothing against India, but because they felt they would have better chances in those countries. And those who stayed back in India, did so by choice.

We are Indians by choice. And we have proved our patriotism beyond any shade of doubt by that very act.

After the Chinese war, Pandit Nehru had set up a commission and it was headed by an Anglo Indian, Lieutenant General Henderson Brooks.

So, telling such a lie about the number of Anglo-Indians in the country has added salt to the wound.

We are very sure about the number of Anglo-Indians in Kerala, especially in Hibi Eden's Ernakulam constituency. I belong to that constituency and I can say so with some authority.

For example, just near the high court in Ernakulam, there is an Anglo-Indian parish of the Catholic church to which I belong. In 2001, we celebrated the 175th anniversary of the foundation of the church and we published a souvenir in which all the parishioners, both Anglo-Indians and non-Anglo Indians, were listed with all the details including their date of birth.

How many Anglo-Indians will be there in Kerala, according to you?

In Kerala itself, the realistic number will be anything between 75,000 and 1 lakh.

That's because Kerala happened to be one of the earliest gateway to the Europeans. It was also one of the most welcoming areas, whether it was Travancore, Cochin or Malabar. So, every community felt at home here. 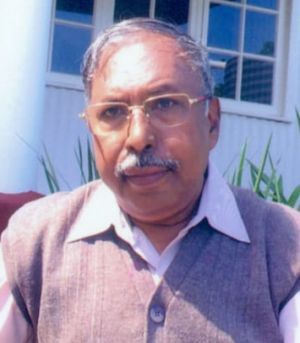 We have about 40 Anglo-Indian associations all over Kerala. Assuming that there are about 100 families in each association with one or two children, you can come to a number.

But these numbers might not have come in the census because of historical reasons. For example, during the Dutch conquest, the Portuguese descendants have to run away to far away places and take refuge even in forests. They slowly got mingled with the locals and even surrendered their surnames. Now, we are trying to identify them.

The reservation for the Anglo-Indian community was started by the British. Do you need reservations even now? Have you not become a part of India?

See, India is a mosaic. There is a unique identity, at the same time there is a merger. It is like a salad. You are a carrot, but you are part of the salad. That way, we are Indians and nobody can question our identity as Indians; we are also Anglo-Indians.

From time immemorial, we have been like that. Take, for example, sports. Norman Pritchard became India's first-ever Olympic medallist, winning two silver medals at the 1900 Olympic Games in Paris. He contested for India and not for Britain. At that time itself, we were trying to merge with the larger society following the salad model.

You had reservations in the both Houses of Parliament and also in the state assembly. How much does the community need this reservation now?

It is required all the more now because we need the reassurance that we are being recognised as Indians, our patriotism, our services and our very existence as Anglo-Indians.

As the carrot or the cucumber in the salad, our identity has to be recognised. The continuance of the reservation is a reassurance that we are taken care of, respected and valued.

But why reservations? You can be part of the election process itself.

It is true. But being a very, very small community, on our own we will not be able to be a part of the process. We are not numerically like the SC/STs.

After Independence, only one person from the Anglo-Indian community got elected to Parliament and that is Derek O'Brien. That also, only because of Mamata Banerjee and not because of his Anglo-Indianness.

You know the election process, it is majoritarianism. We don't have the numbers to get a seat by any political party, and we are dispersed.

So, revoking of the reservation or taking away the privilege is all the more painful to us.

If they had taken the number of decorated people in the armed forces, it will be more than 296! 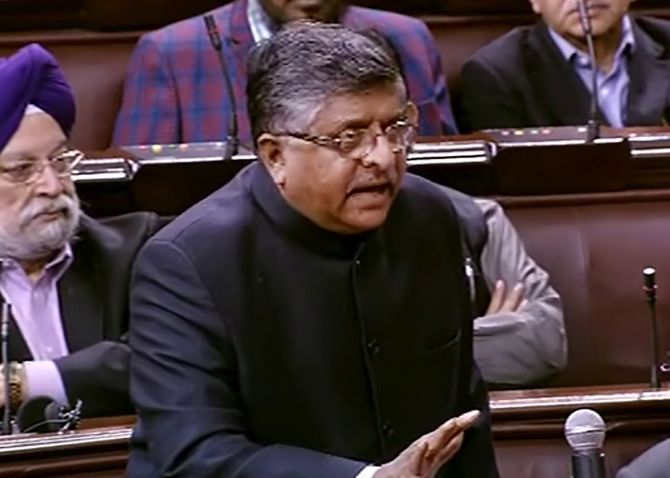 IMAGE: Law Minister Ravi Shankar Prasad. 'Telling such a lie about the number of Anglo-Indians in the country has added salt to our wound,' says Ignacius Gonsalves. Photograph: RSTV/PTI Photo

Would you say the decision to scrap reservations is against the community?

Yes. We fear worse things to happen. We feel this is just a teaser. I wonder whether later, the minority Christian community as such will be targeted. Because there is no rhyme or reason to do this now.

First of all, it was unnecessary, discriminatory and a breach of privilege.;

Let them prove that we have come up in life and that's why we don't need reservations. We can understand that.

Do you see this reservation as your voice in Parliament and the assembly?

Yes. We can take membership in a party or fight as an independent. But it will not work because we are a very small community.

When the issue came up in the assembly, they said, they fear we will not be integrated unless we are part of the political system.

Has the community integrated into society?

Very much. At the same time, keeping our identity intact. Like I said earlier, like a carrot or cucumber in the salad.

You take any Anglo-Indian community, you see even Brahmins getting married to our families these days. We are an open-minded community.

Like you said, there are many Anglo-Indians in Kerala. Did you at any point feel alienated against?

In Kerala, we don't feel like that as the general culture of Kerala is very welcoming.

You will find communities from all over the world in Kochi and there is no history of any communal riot here. Kerala is an extended Kochi.

Do the Anglo-Indians in Kerala have ancestors in the British, Portuguese, French and Dutch communities?

Yes, we have ancestors in all of them though majority of us are Portuguese and Spanish descendants.

According to the Constitution, domicile in India is given to those who have European parentage from the father's side.

Is the number more in Kerala?

The concentration is more in Kerala because the Europeans first landed here. Then, of course, because of the welcoming nature of Kerala.

In fact, when the community felt persecuted elsewhere, they came here as the Maharaja of Cochin welcomed them then.

How is your community going to face this present situation?

We are going to totally rely on the goodwill of the other communities. There is no other way. In fact, so many communities have come forward in support of us. We know we cannot put up a show because we don't have the numbers.

Secondly, the minister has said the issue is not closed.

Thirdly, we will approach the President of India with a memorandum. We hope as the custodian of the Constitution, he will intervene.

We are also looking at the possibility of going to the Supreme Court.

As an Anglo-Indian, I am always hopeful.

Why I said this was only a teaser is because the minister said the number was based on the 2011 Census.

We are not the only ones who are affected; there are so many other communities in Kerala whose numbers are not correctly represented in the Census.

Who would believe that there are only 180 Sunni Muslims and only 1,500 Catholics in Kerala? Will anyone believe these numbers?

I don't know who prepared this calendar of errors.

But we never expected this from a minister. Still we trust Mother India and her children. We hope better sense would prevail.

I feel sorry for the two Anglo-Indian MPs nominated by the BJP government. They should have warned us.

Why are they silent? Were they a party to this travesty of the Constitution of India? Did they not betray us?

We understand they are party ,men but were they not nominated because they were Anglo Indians?

No one gave us a signal that this was coming. It was a breach of trust.

This was like a Chinese war for us Anglo-Indians, unexpected.

Shobha Warrier, the author of several books, covers national affairs and business for Rediff.com
She can be reached at shobhaw@rediff.co.in