News
Business
Movies
Sports
Cricket
Get Ahead
Money Tips
Shopping
Sign in  |  Create a Rediffmail account
Rediff.com  » News » 'National security is important, but humanity is above all that'

'National security is important, but humanity is above all that'

'In our country, files disappear from government offices so easily and you expect a poor man to keep all his papers in orders.' 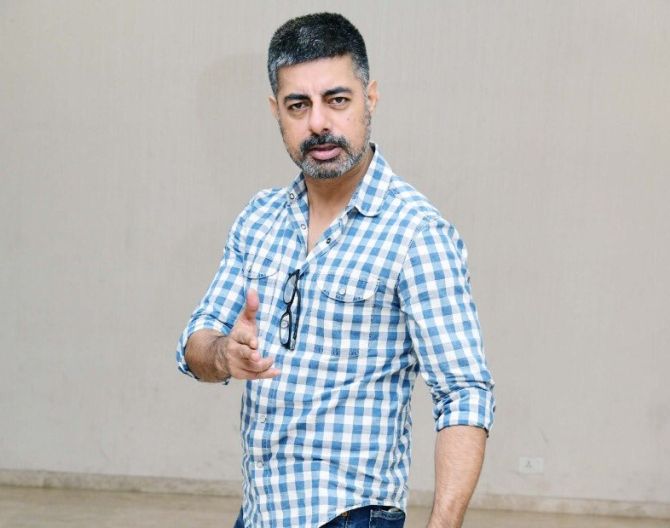 Television actor Sushant Singh was suddenly removed as the host of the daily crime drama Savdhaan India, which airs on Star Bharat, late on December 16 through a WhatsApp message.

Singh, who has hosted the show since 2011, tweeted about his removal a day after he was seen at a rally protesting against the controversial Citizenship (Amendment) Act.

He hinted his involvement with the protests may have been the reason, saying it was a "small price" to pay for speaking up. 'And, my stint with Savdhaan India has ended', Sushant tweeted.

When asked if he was paying a price for speaking the truth, Sushant responded by tweeting, 'A very small price my friend. Bhagat Singh, Sukhdev and Rajguru, what will I reply to them?'

""If anyone is coming to take refuge in our country by leaving his home, family and country he can only be a mazloom (helpless) person. How can we see his religion and decide whether he should be given citizenship or not?" Singh asks Syed Firdaus Ashraf/Rediff.com.

How did your contract with Savdhaan India on Star come to an end?

I got a message from them (Star) that my last day for shooting will be on December 20. They mentioned that there were a few budgetary issues, but then requested whether I could do a few voice-overs for them and after three months they could re-launch the show. I felt the whole thing to be very strange.

I asked them if the show was stopping or was it that they didn't want me in the show. There was no clarity and then they said we will meet and find a way.

Who sent you the message? I'm asking because Star is refusing to comment on your exit.

I want to talk to them. I am not unhappy with anyone. An actor's contract can be terminated by a producer or channel any time they want.

I completely agree on that part, but it has to be done with some kaida (rules and regulations). Whatever the reason they want to sack me, I don't have a right to ask them. They could have given me one month's notice as they did earlier.

At that time Ashutosh Rana replaced me and they changed the format of the show. They wanted to experiment. I respect that kind of decision.

Why is it that your sacking is being linked to your views on the Citizenship (Amendment) Act on social media?

When it comes to me, I can only say it is speculation. People have connected these two things together. I did not mention any such things. I am myself confused.

You wrote about Bhagat Singh and Rajguru in your tweet.

Someone asked me on Twitter -- is this the price you are paying for speaking the truth? I said that if it is true then this is a very small price that I have to pay.

Does this happen often? An actor losing a job because of his political views?

This has happened to me for the first time. I have heard about such issues with actors like Swara Bhasker in her interviews. That is fine. People can choose to disassociate with people who have different opinions. This is a free country.

I just say that they could have done it fairly. They could have given me a month's notice and the matter was over. I feel sad because I had a very long journey with the show.

I had an emotional attachment with the show and the channel has taught me lot of things (as an actor).

This show has given me lot of things in life. You will obviously feel sad; after all I am human.

It is indeed sad because news of your exit was given to you at night and that too on Whatsapp.

We could have met and spoken (face to face).

Why do you feel strongly about the CAA?

In the Preamble of our Constitution it says that in India's territory any human being and please note there is no word called citizen is used. There will be no differentiation on basis of religion, creed and caste against any human being.

This is our Constitution. And we bring an Act in which you are keeping only one religion out of this (Islam). I feel this is wrong.

If anyone is coming to take refuge in our country by leaving his home, family and country he can only be a mazloom (helpless) person. How can we see his religion and decide whether he should be given citizenship or not.

The government's stance is that s/he is coming here for illegal activities.

For those who are coming to do illegal activities, the army is there to take care of that, even the Indo-Tibetan Border Police is there.

I am not saying keep borders open. Every country has limited resources. I agree to that.

Our duty is to stop them at the border. And if we cannot stop these refugees and those who have already come back, then send everyone back.

If we say those who are persecuted because they are a minority, then why are you keeping only Muslims out?

(Interrupts) When the NRC (National Register of Citizens) happens, who will suffer? Poor people.

They don't have homes, they live on footpaths. You are asking them to produce identification papers and that too papers before 1971. Where will they get it from?

During the last NRC exercise in Assam, they included a Kargil war hero.

In our country, files disappear from government offices so easily and you expect a poor man to keep all his papers in orders.

And you expect that there should be no mistake in his Aadhar card or his spelling is not matching with birth certificate so (will you declare him an illegal refugee)?

Are you not getting emotional about this issue?

National security is important, but humanity is above all that.