'By manipulating India's electoral laws, the aim of the Modi government is to weaken democracy to such an extent that it ultimately crumbles.' 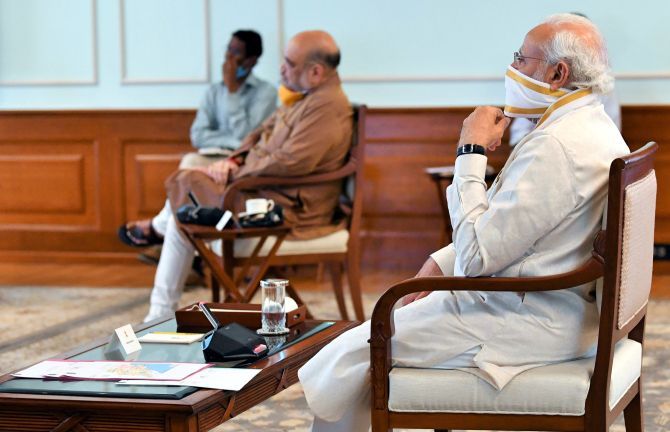 Advocate Khemchand Rajaram Koshti is a battle-hardened lawyer of many public interest litigations in Gujarat.

From getting a stay on Narendra Damodardas Modi's plan, as chief minister, to make voting mandatory in Gujarat local polls to filing a plea against 'religious profiling' of students to a plea seeking harsher punishment for political leaders filing misleading information in their election nomination form, and many more, Koshti considers cleansing Indian politics of electoral malpractices as his "hobby".

Recently, he filed a PIL in the Gujarat high court pleading that expenditure incurred to conduct by-elections warranted due to the resignation of MLAs to hop from one party to another party for personal benefit, be borne by the contestant instead of being footed by the Election Commission of India.

The PIL, which was scheduled to be heard before the chief justice of the Gujarat high court on October 29, has been rescheduled for November 3.

"My only concern is to save democracy and public money which is unnecessarily spent on conducting mid-term election for such turncoat MLAs," Koshti tells Prasanna D Zore/Rediff.com.

What prompted you to file this PIL in the Gujarat high court?

I have been quite active in filing PILs in matters concerning electoral reforms.

Cleansing India of electoral malpractices is one of my favourite hobbies.

In 2015 I had filed a petition challenging the compulsory voting ordinance in local elections passed by the Gujarat government headed by (then) chief minister Anandiben Patel.

It was Mr Modi's dream to make voting compulsory in Gujarat and the plan was, if he had succeeded, to make it compulsory in the entire country. I have stopped that for now.

If I had not filed a PIL, the courts would not have taken suo motu notice of this dangerous ordinance.

The Gujarat (high) court heard the matter and granted me interim relief; that law has been stayed.

It was an old ordinance prepared by Modi's government in 2009, but passed in 2014 and which Anandiben Patel tried to implement in 2015.

What prompted you to file this latest petition?

Since 2015 I am working for electoral reforms. I am a democrat. That's what prompted me to file a PIL in the Gujarat high court to ask the MLAs, who resign from the party on whose ticket they won an election in the first place, and then join another party and re-contest within six months, to bear the expenses of conducting the re-election or bypoll.

In the 2017 Gujarat election the BJP won 99 seats and Congress won 77 seats. The BJP had just got a simple majority and there was no way Congress could have formed the government.

That kept the field open for poaching of MLAs because the ruling party (BJP) wanted to kill democracy.

According to me, the normal thinking of the voters as of now in Gujarat is, what was the point of giving votes to the Congress when their MLAs resign mid-term and re-contest the election on the BJP ticket? Ultimately, Congress MLAs have gone to the BJP. Such thinking makes voters lose their trust in democracy and the election process. Therefore, it is dangerous for democracy.

Such practices make elections meaningless and erode the faith of the people in their voting rights.

The people who voted for those Congress MLAs who won and then later defected to the BJP and won on a BJP ticket have lost their representation even before the end of tenure of five years.

Voters then question the utility of participating in elections and their right of electing representative of their choice.

If the Opposition becomes weak or is made weak by such actions, then the ruling dispensation automatically becomes autocratic.

I have seen such games being played, of purchasing the MLAs to reduce the number of Congress MPs in Rajya Sabha and increase the number of BJP MPs in the Council of States. This is their game.

But still I am not concerned with that. My only concern is to save democracy and public money which is unnecessarily spent on conducting mid-term election for such turncoat MLAs.

If I get a ruling in my favour, then it will be applicable for all the turncoats and not just to MLAs belonging to one political party.

What is your PIL about?

Let the MLAs who resign mid-term just to join another political party and win an election for personal benefit pick the tab for conducting such bypolls.

Why should the taxpayer be made to pick the bill?

Defections/party-hopping from one political outfit to another has been happening since quite some time. The culture of aaya Ram, gaya Ram is common in Indian politics.
What made you intervene in this matter now? Does your PIL not seek to support one political party against the other?

In the past, the Congress too has done what the BJP is doing today -- purchasing or poaching on elected representatives of other parties. I do concede that.

Now when the Supreme Court has passed the judgment in the matter of Karnataka (of 19 Congress MLAs who had resigned from the party to recontest) wherein the court has clarified that MLAs are entitled to resign from their seats, and I agree that is their indefeasible right.

What about the accountability of the elected representatives towards the voters who voted for them?

The issue of MLAs resigning from their seats when the House is not even in session is not covered under Schedule 10 (of the Constitution) that deals with anti-defection law.

This manipulation of people's verdict by MLAs has not been addressed in any manner whatsoever, either in the Constitution or under the Representation of the People Act, 1951.

Many sections of the RPA lacks transparency. From every few sections (of the RPA) at least one section needs to be removed or corrected.

How much money does the Election Commission of India spend in conducting bypolls in one assembly constituency?

I have filed an RTI with the ECI to know about this and their response is in the pipeline. My RTI is with the chief electoral officer, Gujarat.

How long before you get this information?

I have tentatively referred to this amount (around Rs 2 crore) by citing the Jabalpur bench of Madhya Pradesh high court wherein it has also issued a notice wherein some MLA from the Congress had changed the party (and joined the BJP) and without contesting election or winning the election, they have become ministers.

The Jabalpur high court has issued the notice on October 23 (external link) to the governor as well as to the speaker (of the Madhya Pradesh assembly) and chief minister as well as the ECI.

Such acts of MLAs resigning and re-contesting elections have been happening in Gujarat, Karnataka and Madhya Pradesh (where 14 people were made ministers even when they were not elected as MLAs).

This makes one wonder what was the whole point of fixing the tenure of elected representatives for five years.

This is a joke on Indian democracy and electoral politics.

There is no cost here which these MLAs have to pay even as they waste taxpayers's money when bypolls are conducted.

We need to have electoral reforms that impose costs on such MLAs, for preservation of democratic norms in India and for stopping the wastage of the exchequer's money.

Isn't your PIL then impinging on the rights of elected representatives to resign from their seat?

I'm not touching that.

My issue is with the MLAs resigning midterm for their personal interests and imposing an unnecessary election on the people who had spent their time going to the booths and voted for the candidate of their choice, and with the wasteful expenditure incurred by the ECI which ultimately is borne from your and my pocket.

If MLAs resign for such reasons, then it is only fair that the cost of conducting such re-elections must be recovered from them.

While on the surface, the aim of BJP and the Modi government in encouraging such malpractices is to fulfil their agenda of Congress-mukt Bharat, if you delve deep you will realise that the real aim of this regime is to make India a dictatorship by manipulating India's electoral laws and weaken democracy to such an extent that it ultimately crumbles.

I am not at all talking about corruption here. If I allege corruption in such cases, then it becomes incumbent upon me to prove the charge.

If I don't have any concrete evidence of corruption in such cases, then I cannot put it on record in my plea to the court.

My contention thus is simple: Let the person responsible for warranting a re-election for personal benefit bear the cost of conducting the exercise.

I am not saying that costs should be borne by contestants if a re-election becomes necessary due to the death of an elected MLA. But if one resigns for personal benefit then that person should pay.

Shouldn't it be the job of the Election Commission of India to adopt best electoral practices to strengthen democracy in India?

Article 324 of the Constitution states that it is the bounden duty of the Election Commission of India to conduct free fair and unbiased elections.

Since 2002, filing an affidavit has been mandatory in the judgment of Union of India versus the ADR (pdf file; external link) (the Association for Democratic Reforms) in which case the Supreme Court in its order has categorically said that the high courts have the power (external link) to direct the Election Commission to fill the vacuum. These kind of cases are the unattended, unaddressed part.

And secondly, the Election Commission has power under Article 324 (external link) to fill the gap if such a situation presents itself, the gap here being a re-election mandated before the five-year term due to the resignation of an MLA and the conduct of a mid-term election.

I call it a gap because I am concerned about the taxpayers's money and continuous membership of an elected representative for five years.

I have also made the Union of India as a party in this PIL.

Why every Indian should be worried
'This government has tamed everyone' 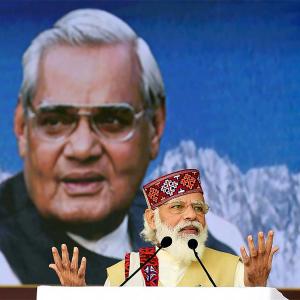