News
Business
Movies
Sports
Cricket
Get Ahead
Money Tips
Shopping
Sign in  |  Create a Rediffmail account
Rediff.com  » News » 'The Kashmiri has had enough of Pakistan'

'He knows India is going nowhere.'
'India will never let go of Kashmir, so he wants to settle with India.'
'Settle honourably with peace, dignity and justice.' Even as protests against Pakistan have erupted across the country after last Thursday's terrorist attack on a CRPF bus, and the government is considering punitive measures against our western neighbour, for Amarjit Singh Dulat, former chief of the Research and Analysis Wing, India's external intelligence agency, war with Pakistan is not an option.

"It is only through dialogues that the conflict in Kashmir can be resolved," insists Dulat, who served as advisor on Jammu and Kashmir to then prime minister Atal Bihari Vajpayee.

"We need to talk to the Kashmiris first as they are our own people. And when things calm down, we need to talk to Pakistan," Dulat, on a brief visit to Mumbai, tells Rediff.com's Syed Firdaus Ashraf.

After the Pulwama terror attacks, how do you even talk peace with Pakistan?

To attain peace you need to create a peaceful atmosphere. And you are right in a way, at this point of time no one will talk of peace, but Kashmiri leaders have spoken about peace.

Mehbooba Mufti has spoken about reconciliation. Dr Farooq Abdullah said the Kashmir issue cannot be resolved via the gun, but only with talks.

Kashmiri leaders also have the concern that the wrong people should not be caught and they should not be beaten up (in such an atmosphere).

Even out of Kashmir, some harassment is going on against Kashmiri students, like I read in the newspapers that some students were sacked from Dehradun colleges. These things are unfortunate as those boys studying in Dehradun are not to be blamed for (the terror attacks).

In the last 30 years, a lot of Kashmiri students have come out of the valley and settled all over the country. You will find plenty of Kashmiris in Mumbai, Delhi, Goa and Kolkata.

Kashmiris pelt stones at the security forces. The local population does not support India.

In Kashmir, we talk repeatedly about alienation, and this alienation goes up and down. So even if there is an anti-India feeling today, it does not mean that they are pro-Pakistan.

India will never let go of Kashmir, so he wants to settle with India. Settle honourably with peace, dignity and justice.

People tell me that Kashmiris talk about azaadi. I say no, it is not about azaadi, what the Kashmiri means is accommodation.

When such horrible terror attacks take place, how do you hold on to ahimsa?

We need to look inwards. Why is a young Kashmiri boy committing suicide? Why is this happening?

Why are you not blaming Pakistan? Jaish e Mohammad has taken responsibility for the Pulwama attack.

Jaish e Mohammed was finished in Kashmir. Now it has come back in a big way in the last two years.

Earlier, it was a deadly force and was involved in the attack on Parliament and the hijack of IC-814. They had gone quiet, but now they are back in a big way.

I don't think war is an answer and Vajpayeeji did not believe so too. He was tested three times.

Dr Manmohan Singh was tested in a big way during 26/11 and neither of these great men thought war was the answer.

I don't think even today war is the answer, but I am nobody to speak about these things.

I want to put it on record that we need to talk to the Kashmiris first as they are our own people.

And when things calm down, we need to talk to Pakistan.

Vajpayeeji said he did not go to war with Pakistan because he believed it was easy to start a war but no one knows how to bring an end to war.

When Vajpayeeji took the bus to Lahore, he said he will never allow war to happen. He was a great man.

The only way forward in Kashmir is Vajpayee's way.

If we ever want to begin a dialogue with Pakistan, the starting point again will be General Pervez Musharraf's four-point formula.

Both sides failed to implement it as both governments were not ready.

Dr Manmohan Singh says it almost happened, so it is sad that it did not happen.

If it had happened, then maybe we would have had 15 years of peace in Kashmir.

Pakistan is like a poisonous snake that has bitten you in the last 20 years, so how can you still talk of peace?

So many Indian soldiers have been martyred in Kashmir. How can we forget these things?

I am not saying soldiers didn't die. Kashmiris too died and so were militants killed.

What I am saying is that you go back to Musharraf's time. After 9/11, Musharraf did hold back. Musharraf was a party to that ceasefire agreement.

And before that ceasefire agreement, Vajpayee had offered an unconditional ceasefire during Ramzan. So there was peace. Things were better much better.

Do you have any constituency in India who wants peace with Pakistan now? There seems to be no one.

Speak to Dr Farooq Abdullah, that is where the constituency of peace begins.

He has been saying for the last 30 years what Musharraf said, that the solution to Kashmir lies in the Line of Control, that what is theirs is theirs, and what is ours is ours and we should stop this nonsense.

That is the offer made by Musharraf too, with cosmetics added. Therefore, instead of one point, it became four points.

Do you think the people of India will accept such a formula? We even have a parliamentary resolution that all of Kashmir is ours.

If it is done, it is done. If it is not done, then nobody is ready. If Dr Manmohan Singh had done it in 2006, what do you think would have happened?

The Opposition would have come out on the roads.

You can come on the roads as we are a democratic country and protests are legitimate. The point is Dr Manmohan Singh was given everything on a platter by Vajpayee. And he was only following Vajpayee's Kashmir policy. So how can you blame Dr Manmohan Singh?

If Vajpayee had done it or Advani had done it, then would the Congress have come out on the roads?

Today, I agree passions are high. People are riled up and not in the mood to talk to Pakistan. This is not the best time to talk, but ultimately one has to talk.

Like Vajpayee said, you can choose your friends, but not your neighbours. We have China on one side and Pakistan on one side.

Who is more dangerous? Possibly we face a greater threat from China than Pakistan.

Until he spoke on Tuesday, Pakistan Prime Minister Imran Khan was very quiet on the terror attack.

There was an immediate reaction from Pakistan. They condemned the attack. They said it is very regretful.

Pakistan is ruled by the generals and they don't want peace. The prime minister is only a puppet. So who do we talk to?

How does it matter who rules and who doesn't rule? Maybe a puppet is better.

What about Pakistan exporting terrorism to India? We cannot shut our eyes to this fact.

Then blow up Pakistan! Finish them off! What is the solution?

These things happen. This attack was not the first time. Every prime minister is tested some time or the other.

Narendra (Damodardas) Modiji has been lucky, that he almost survived for five years without serious (attacks).

Do you think it was a big mistake to free Jaish founder Masood Azhar in December 1999 in exchange for the IC-814's passengers and crew?

The option in IC-814 was in Amritsar and we goofed up there, after that there was no option. 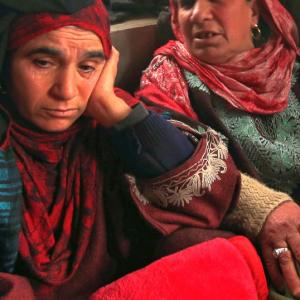