News
Business
Movies
Sports
Cricket
Get Ahead
Money Tips
Shopping
Sign in  |  Create a Rediffmail account
Rediff.com  » News » Suicide bomber's brother: 'What he did is not right'

'The 41 men who died, they are also somebody's sons or brothers. It is wrong.' 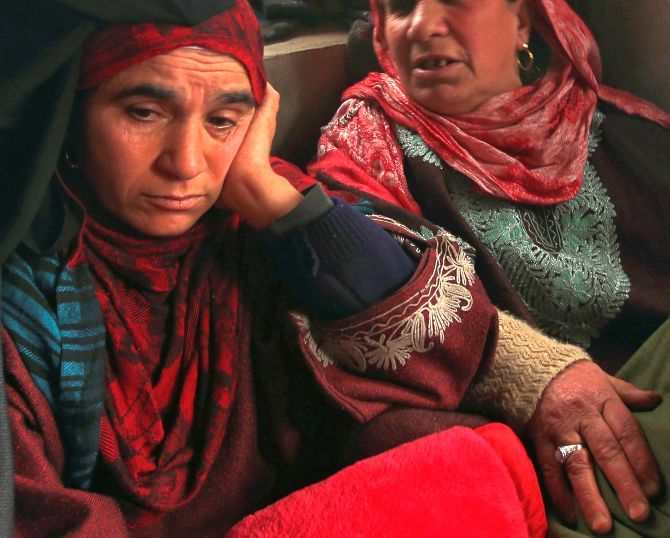 It was 5.30 pm on February 14, and Javed Ahmad Dar, 22, a carpenter, had just reached home in Gundibag village, Pulwama district.

His parents were in the other room in their modest home when he discovered that his brother Adil Ahmad was the fidayeen who had rammed an explosive-laden vehicle into a bus carrying CRPF jawans killing 41 of them.

Although his village is close to the site of the terror attack, just 10 km away, Javed stayed home to calm his shell-shocked parents.

The family has since come to terms with Adil Ahmad's death -- both the cause and the manner of his dying -- but with grief remains shock. That the boy who had not spoken to them in nearly a year, had become a suicide bomber.

Javed's father is a small-time trader and the only other earning member in the family. His youngest brother, 18, is still a student.

"If we thought he was going to join the Jaish, don't you think we would have stopped him?" Javed Dar asks Rediff.com's Swarupa Dutt.

When did you learn that your brother was the suicide bomber who drove his vehicle into a bus carrying CRPF jawans?

The blast happened at around 3.30 pm; we got the news at 5.30 pm. I saw it on the Internet. We still can't believe that Adil can do something like this, or that the man who did it was Adil.

But it is him and the video suggests it was him, but it is difficult to believe it. (A 10-minute video of Adil Ahmad, speaking to the camera, holding a rifle surrounded by gun magazines and clips, emerged on social media soon after the blast and talking about what he has set out to do.)

Did your family know he had joined the Jaish e Mohammed?

Adil disappeared on March 19, 2018. We had filed a missing person FIR at the police station, but there was no progress in the case. Then, nearly one-and-a-half months later, we saw Adil's picture on the Internet.

We saw his photograph with his name, and the name of his tanzeem (organisation), Jaish, and nothing else. He never contacted us ever again.

Did you notice any change in him before he joined Jaish?

There was no change. He never spoke about any tanzeem, not Jaish, nor Lashkar, nothing. But he used to talk about his haq (right) -- azaadi (freedom).

What he did is not right. Azaadi is the government's problem.

The 41 men who died, they are also somebody's sons or brothers. It is wrong. We are not happy they died.

Were you close to your brother?

I don't know what went on in his mind, we did not confide in each other. He was studious, but always helped with the housework and whenever he found work, he did odd jobs as a mason or carpenter, mostly during the holidays.

He wanted to become a teacher. Nek ladka tha, pata nahin kya ho gaya usko (He was a good boy, I don't know what happened to him).

Did you know that he was being radicalised?

We had absolutely no idea. If we thought he was going to join the Jaish, don't you think we would have stopped him?

Adil thodi batayega woh hathiyar uthayega. Gharwale thodi jaane dete usko. Obviously, Adil did not tell us he was taking up arms. The family would never have let him sign up.

In your Gundibag village in Pulwama, is Adil the only one to have joined a jihadi group?

No, no, there are many people here who have joined the Jaish, Lashkar (Lashkar e Tayiba, the terrorist group responsible for the 2008 Mumbai serial blasts) and the HM (Hizb ul Mujahideen).

Were they his friends?

So why did he join the Jaish?

Only he knows that. Everyone has a mind. He has one, as I and you do. It all depends on how you use your mind.

I don't know if he will be happy with what he has done.

How does your community view Adil?

I don't know, we hardly step out of the house. Neighbours have come to meet us after his death and, like us, they too are upset that Adil and those men (CRPF jawans) died.