'This is an issue that is larger than the interests of any one party.' 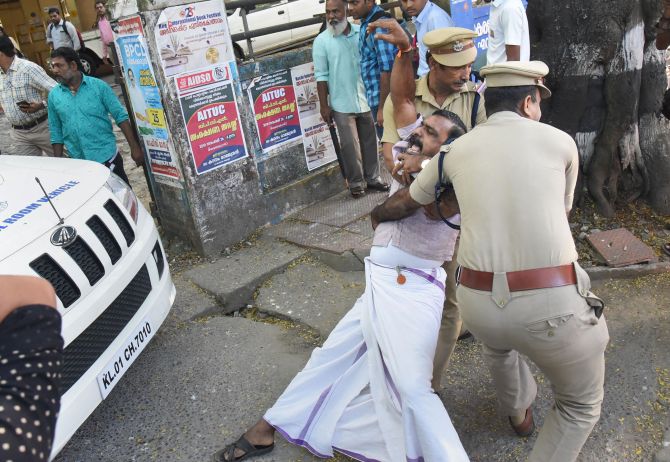 IMAGE: Police personnel detain a protestor during a demonstration against the entry of activist Trupti Desai and other women at Sabarimala temple, outside the police commissioner's office in Kochi, on November 26, 2019. Photograph: PTI Photo

In September 2018, the Supreme Court pronounced its landmark verdict that not allowing women and girls between the ages of 10 and 50 to enter the Lord Ayyappa temple in Sabarimala was illegal and constitutional.

But the Kerala government's decision to implement the court order led to an unprecedented situation when women came out on the streets protesting against the government and the court's decision.

A few weeks ago, based on a review petition on the 2018 verdict, the Supreme Court asked a seven-judge bench to review the case, but made it clear that its earlier verdict stands.

The Supreme Court also said that as restrictions on women in religious places were not limited to Sabarimala alone, it wants the new bench to review the religious practices and rights of Muslims, Bohras and Parsis too.

"An overall examination of the issue can only be healthy for society as a whole," Dr Shashi Tharoor, the Congress MP from Thiruvananthapuram, tells Rediff.com's Shobha Warrier.

The recent Supreme Court judgment on Sabarimala has left many confused. The Kerala chief minister said the state government was unclear about the implications and would seek legal opinion. How do you view the verdict?

I welcome the Supreme Court decision to refer the issue of Sabarimala (as well as questions concerning certain practices in other faiths) to a 7-judge bench.

These are complex matters of faith that require the full attention and application of our apex court -- and therefore, by following a well-defined and structured system of referring the issue to a larger bench, the Supreme Court has reiterated that it is following due process and is conscious of the social and cultural ramifications of the matter.

What kind of impact will it have on the political scenario in Kerala?

I believe that all political parties in Kerala have a duty to work with stakeholders in society and ensure an amicable resolution to these issues, irrespective of their political differences.

So, when a final decision is made by the apex court, I hope that all parties will set aside their differences and work towards this common goal.

Meanwhile, the present decision is unlikely to add fuel to the political fire since there is no specific outcome for anyone to object to. Even the Left government has interpreted the decision as a de facto reaffirmation of the status quo.

Kerala's law minister said though the Supreme Court did not issue a stay, for all practical purposes it was a stay. Do you think the Left government changed its stance on the issue after having seen the way people of Kerala reacted last year?

It is possible that the Left has finally recognised that their politics cannot be divorced from the genuine sense of anguish among the believing public and has modified their position accordingly. But that is for them to explain.

I am not particularly concerned with any particular party's posturing since this is an issue that is larger than the interests of any one party.

If one were to say the Supreme Court played it safe by asking a seven-judge bench to evolve guidelines on cases involving the right to equality and right to follow faith in matters concerning religion, would you agree?

As I said previously, these are complex matters that will, in turn, require substantive deliberations and a nuanced understanding of both the legal and social undercurrents at play.

In that sense, what the apex court has done is to simply follow a well-defined process of deliberation, taking into cognisance the magnitude of the problem.

There is no harm in playing it safe when they have seen the reactions to their earlier judgement.

Is it the right decision to give time for all concerned to reflect on the issue and come to a decision later, like in the case of the Ram Janambhoomi issue?

It is part of a well-established convention and given that this is nothing but due process, I have welcomed this decision by the Supreme Court.

Matters of faith go the heart of people's most visceral beliefs and it is always wise to tread carefully on people's feelings.

The verdict does not limit itself to the practices and rights of Sabarimala alone, but wants the 7-judge bench to review what is followed by the Muslims, Parsis and Bohras.
What kind of implications will this have on society, legally and socially?

Rather than contemplating the hypothetical at this stage, let us wait for the full judgment to come out before commenting on the impact it will have.

One of the concerns raised by Sabarimala devotees was that the stand taken in their matter was at variance with the approach taken on different gender rules in other faiths.

An overall examination of the issue can only be healthy for society as a whole.

Shobha Warrier has extensively covered the Sabarimala issue for Rediff.com. She is the author of His Days with Bapu: Gandhi's Personal Secretary Recalls among several books. She can be contacted at shobhaw@rediff.co.in 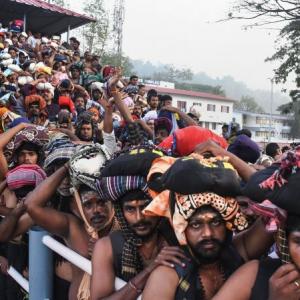