In a 3:2 majority verdict, the Supreme Court Thursday referred to a larger 7-judge bench the pleas seeking review of its historic 2018 judgement allowing women and girls of all ages to enter Kerala's Sabarimala temple, set to open on November 17, along with other contentious issues of alleged discrimination against Muslim and Parsi women. 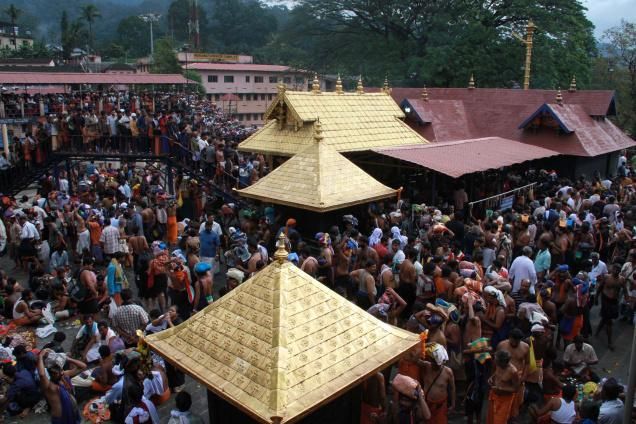 As the majority verdict, penned by Chief Justice Ranjan Gogoi, kept the review pleas pending for a 7-judge bench and did not stay its September 28, 2018 majority judgement, girls and women of all age groups will be entitled to undertake the pilgrimage to the shrine.

The CJI, who wrote on behalf of himself and Justices A M Khanwilkar and Indu Malhotra, said the debate about the constitutional validity of religious practices like bar on entry of women and girls into a place of worship was not limited to the Sabarimala case.

They said such restrictions are there with regard to entry of Muslim women into mosques and 'dargah' and Parsi women, married to non-Parsi men, being barred from the holy fire place of an Agyari.

It was time the apex court evolves a judicial policy to do "substantial and complete justice", the added.

The majority view, delineated by the CJI in its nine-page verdict, was not agreed to by Justices R F Nariman and D Y Chandrachud.

Justice Nariman, writing for himself and Justice Chandrachud, regretted his "inability to agree with" the view of the CJI and said the scope of the review pleas was limited to the entry of menstruating women into the hill-top shrine in Kerala and directed the state government to ensure strict compliance of the 2018 verdict.

The majority judgement also said that a decision by a larger bench "would put at rest recurring issues" with regard to the fundamental right to profess and practice any religion.

"In the context of the present strength of judges of the Supreme Court, it may not be inappropriate if matters involving seminal issues including the interpretation of the provisions of the Constitution touching upon the right to profess, practise and propagate its own religion, are heard by larger bench of commensurate number of judges," it said.

It set out seven questions of law to be examined by the larger bench. They included -- interplay between freedom of religion under Articles 25 and 26 of the Constitution; need to delineate the expression 'constitutional morality'; the extent to which courts can enquire into particular religious practices; meaning of sections of Hindus under Article 25 and whether 'essential religious practices' of denomination or a section thereof are protected under Article 26.

Another question was the "permissible extent of judicial recognition to PILs in matters calling into question religious practices of a denomination or a section thereof at the instance of persons who do not belong to such religious denomination".

The top court said: "The subject review petitions as well as the writ petitions may, accordingly, remain pending until determination of the questions indicated above by a larger bench as may be constituted by the Chief Justice of India."

However, Justices Nariman and Chandrachud, in their dissenting view, said that what was before the bench were the review petitions and fresh pleas challenging its 2018 decision.

"As and when the other matters are heard, the bench hearing those matters may well refer to our judgment and may either apply such judgment, distinguish such judgment, or refer an issue/issues which arise from the said judgment for determination by a larger bench. All this is for future Constitution benches or larger benches to do," was the minority view.

The apex court, by a majority 4:1 verdict, had lifted the ban that prevented women and girls between the age of 10 and 50 from entering the famous Ayyappa shrine in Kerala and held that the centuries-old Hindu religious practice was illegal and unconstitutional.

The minority verdict dismissed the review and fresh pleas, saying there was no error apparent with regard to the apex court's 4:1 earlier majority decision.

It also directed Kerala government to comply with the September 2018 decision of the apex court by widely publicising through television and newspapers.

It also directed the state government to take steps to secure the confidence of the community in order to ensure the fulfilment of constitutional values.

The apex court, by a majority 4:1 verdict, had lifted the ban that prevented women and girls between the age of 10 and 50 from entering the famous Ayyappa shrine in Kerala and held that the centuries-old Hindu religious practice was illegal and unconstitutional.

The five-judge Constitution heard the review pleas in an open court and reserved its decision after hearing the parties, including Nair Service Society, Thantry of the temple, the Travancore Devaswom Board and the state government.

The TDB, which runs the Sabarimala temple, had made a U-turn to support the Supreme Court's order allowing women of all ages to enter the shrine.

The TDB had joined the Kerala government to oppose a batch of pleas seeking review of the historic verdict.

The Board had later asserted that its latest position was not due to any political pressure.

Some right-wing activists alleged that the Board changed its stand before the court under pressure from the state's Communist Party of India-Marxist -led Left Democratic Front government.

The Kerala government, which had taken conflicting stands on women's entry into the hilltop shrine, supported the verdict and urged the apex court to trash the review pleas.