News
Business
Movies
Sports
Cricket
Get Ahead
Money Tips
Shopping
Sign in  |  Create a Rediffmail account
Rediff.com  » News » 'Even today, the Gandhi family is the only fulcrum of the Congress'

'Even today, the Gandhi family is the only fulcrum of the Congress' Congress president Rahul Gandhi and general secretary, eastern UP, Priyanka Vadra, wave to the crowds after the former filed his Lok Sabha nomination from Amethi. Rahul lost the election to the BJP's Smriti Irani. Photograph: @INCIndia/Twitter

Tankha, a Supreme Court advocate and AICC deputy chairman, tweeted that all party office-bearers should resign and give Rahul Gandhi a free hand to choose a new team.

In the last couple of days, a string of mid-level Congress office-bearers have tendered their resignation.

As the party plunges deeper into crisis, Tankha tells Rediff.com’s Archana Masih that if the Congress has to take on the challenge of Narendra Modi, it has to become a new party but cannot continue its struggle against the BJP without Rahul Gandhi.

"Ultimately, we are in a crisis. To come out of this crisis you need a crisis," Tankha says.

Do you think Rahul Gandhi should step down and be firm in his decision to do so?

His offer to resign is in itself a big step. He is the only one who has come forward and taken responsibility, but the party feels that without Rahulji, there will be no leadership.

You need people with a very good image, connected with the masses and seen as good leaders. That will not happen unless we put in our papers.

If all functionaries start resigning won’t that lead to further deepening of the leadership crisis?

Ultimately, we are in a crisis. To come out of this crisis you need a crisis. I believe we have to give a free hand to the leadership to reinvent the party and that is why I came forward. I wanted this to be an example for the others.

As a senior MP and general secretary, what are your takeaways about the party as it stands today?

I still believe that the Congress is the need of this country at the end of the day. We are the only inclusive, pluralist party. The BJP may have created a temporary place for itself but this space cannot be occupied by them permanently because of their thinking and mindset.

The Congress is the answer -- but in order to once again become the Congress that it used to be, where it occupied the entire Indian space, you need people from all walks of life to be part of you.

You need to be talking about what the people wish to talk and hear.

What are the most drastic changes the Congress needs to make at this most difficult time in its history?

The Congress party should bring in the best talent in the country -- doctors, lawyers, farmers, social workers, Dalit and minority leaders. It needs real talent and leadership.

The Congress does not have foot soldiers, what about that?

This leadership should be given a lot of respect and freedom to rebuild the Congress, and the Congress will revive. It will happen.

The unit that should have come into this big monolith was not happening. It will happen now once you bring new leadership into the party.

A new leadership under Rahul Gandhi as the leader?

As of today, I don’t see how the Congress can continue its struggle against the BJP without Rahul. There has to be a fulcrum. There has to be a centre for any movement to take place. Even today the fulcrum is only the family. A new centre can come over a period of time but the family has to hold on to ensure the centering of the party.

What about Rahul making way for Priyanka?

Rahul’s sincerity is what attracts people. I respect Rahulji’s decision. We should respect each other’s decisions.

Why did you resign as AICC general secretary?

Rahulji said in an interview that he was extremely pained that he was taking the responsibility and had resigned, but nobody else in the party has come forward to do so.

What he said reflected the truth -- when we see what is happening to the party, if all of us are not responsible, then who is?

All of us have failed. There were such huge defeats coming from all over India. You just can’t say that the national leadership is responsible.

Ultimately we did win in Punjab, in Kerala, wherever you have done good work and people have faith in you, you do succeed.

I felt that Rahulji’s anguish is genuine. We should help him by putting our papers and give him a free hand to reconstitute and reinvent the party.

We need good people who are respected by voters. They should be influential, they should be able to communicate effectively. If we have to take up the challenge of Narendra Modi, it has to be a new Congress party.

How will this leadership vacuum affect the functioning of the principal opposition party?

It is too early. There is a churning in the party. It is a national party which is 100 years old so it will take some time for things to change and get into motion.

Things can’t change overnight but the churning must start and as Rahulji desired, people should accept responsibility for the Congress not winning and a new Congress must come forward.

I felt he is completely correct and I should do my bit. 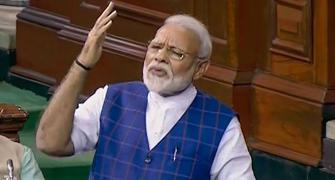