'The Indian Army's surveillance had noticed the Chinese movements.'
'There was no intelligence failure.'

Signalling an end to the month-long standoff in mountainous eastern Ladakh, Indian and Chinese troops have withdrawn from most areas, news reports stated on Tuesday, June 9.

However, the questions remain: Why did the standoff between the two armies take place? Why now? Given the frequent skirmishes, do the Modi-Xi informal summits work? What did China achieve from the standoff? Has India's response been adequate?

Shedding light on these and other questions is Nitin A Gokhale, editor-in-chief, StratNews Global, a long-time Rediff.com contributor, author and strategic affairs expert.

The first of a multi-part, interview with Rediff.com's Syed Firdaus Ashraf:

In June 2017, Prime Minister Modi told the International Economic Forum in St Petersburg that not a single bullet was fired by China or India in 40 years at the border, a statement which was applauded by the Chinese government.
What went wrong in the last three years that first we saw a military standoff in Dokalam and now a face-off in eastern Ladakh?

That statement still holds good as no bullets have been fired even now.

That statement was made to highlight the fact that despite huge differences between India and China on the border issue and boundary negotiations, the protocols and agreements, the system that is followed there prevents any bloodshed, unlike what happens at the Line of Control with Pakistan where everyday there is bloodshed, killings and people getting injured.

That was the context of the statement.

But yes, pinpricks by China have never stopped.

I believe that the intensity or frequency of encounters or standoffs between India and Chinese troops all along the contested, unsettled and un-demarcated border, as you know, has increased because now Indian troops are able to go to areas where they had no access to earlier due to difficult terrain and inaccessible mountains.

But now that access has been improved from our side.

We are now catching up with the Chinese side in terms of infrastructure.

Therefore, the frequency of standoffs have increased as (troop) patrols from our side has increased.

That's why we are hearing more and more standoffs.

Is the current standoff something to do with the 255-km Darbuk-Shyok-Daulat Beg Oldie (DSDBO) road joining Leh to the Karakoram Pass, which upsets China -- like Nepal got offended by the Lipulekh pass road?

There is a difference between Lipulekh and this one (DSDBO road).

On Lipulekh, I think, China instigated Nepal to create a ruckus and raise the decibel level.

At Lipulekh, India is not deploying any troops except for the fact that (it will help) Indian pilgrims go to Mansarovar via that route to Tibet through Uttarakhand and partly via Nepal.

Earlier, this used to help the economy of that area of Nepal.

Now after the road has come up, people will straightaway drive from the Indian side to Tibet without stopping or using Nepalese resources or boundary area.

Thus, it will affect their local economy.

Therefore, due to economic reasons and instigation from China, Nepal is creating a ruckus against India.

There is no comparison between Lipulekh and the DSDBO road.

Because this (DSDBO) road is entirely in Indian territory.

Yes, China is worried as now India has the ability to deploy troops much quicker than before in the Depsang plains, short of Karakoram Pass which is vital for the Karakoram Highway.

It gives India the ability to interdict the Karakorum Highway between China and Pakistan if the balloon goes up.

Also, China is worried that after recent assertions of changing the status of Ladakh (Ladakh becoming a Union territory after Article 370 was abrogated on August 5, 2019).

Plus, Home Minister Amit Shah said (in Parliament) that Aksai Chin is ours.

Do you think China was offended by Shah's statement?

There is nothing wrong in his statement.

It is factual as Aksai Chin is regarded as Indian territory.

It is only that for so many years, since 1962 almost for 58 years, no Indian government functionary at that level has spoken about Aksai Chin either positively or negatively.

Certainly, the antenna must have been raised in China over whether India is trying to get back Aksai Chin.

The Chinese have a stake in Aksai Chin as it connects mainland China to Xinjiang.

The road is called the Aksai Chin road.

Also, Amit Shah's statement is looked at in conjunction with the other statement where he said Pakistan occupied Kashmir is India's territory.

The Pakistanis would have gone running to the Chinese and told them, 'Look, India is eyeing a change of the status quo.'

So certainly, yes, that has a bearing on what is happening in Ladakh.

But there are other factors as China has not given up doing pinpricks and intrusions every summer and spring between the month of April and October.

But now the frequency and intensity have increased certainly.

Was the Indian Army caught offguard due to the coronavirus pandemic and the Chinese took advantage of it? Do you think there was an intelligence failure on our part to gauge China's move?

The Indian Army's surveillance had noticed the Chinese movements.

In fact, when the Chinese came first to the Pangong Tso lake, which is an old disputed point, they (the Indian Army) knew it.

So, it is not that they were not being watched.

There is a post called Lukung which is at a height at Finger 2.

One can see from Lukung for about 10 km into what is a disputed territory between Finger 4 to Finger 8.

I have been there and I am speaking from ground knowledge.

So it is not that they (the Indian Army) were caught unawares.

If you are speaking about Galwan and Hot Springs, there Indian helicopters had noticed movement coming from the Aksai Chin side into the valley.

Since a watch was being kept and Chinese forces remained on their side of the LAC, there was nothing India could have done except building its own strength on our side of the LAC, which is at the confluence of the Galwan river and Shyok river.

The new road is to the west of the Shyok river.

At the confluence, there is a kind of deployment which India has done.

There is a point called Patrol Point 14 up to which the Indian side now gets easy access to as the road has been built or improved.

This road was objected to by China as they do not want India's infrastructure to improve or become as good as theirs.

Therefore, China is putting constant pressure by saying you are changing the status quo.

There was no intelligence failure as far as I am concerned. 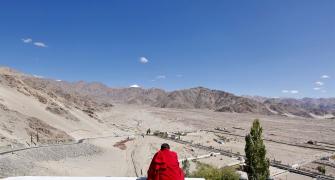