News
Business
Movies
Sports
Cricket
Get Ahead
Money Tips
Shopping
Sign in  |  Create a Rediffmail account
Rediff.com  » News » 'Modi sees himself as a man of destiny'

'Modi wants to go down in history not necessarily as India's first overtly Hindu RSS pracharak prime minister, but as a world statesman who built the idea of India as a great nation.' 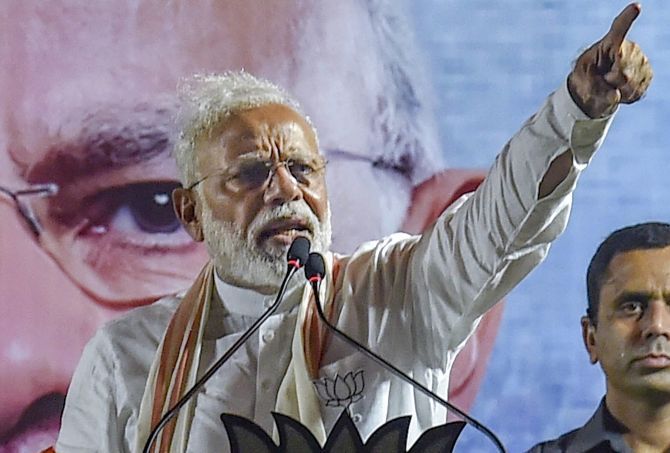 If the 2014 election changed India, 2019 may well have defined what 'new India' is likely to be all about. 2019: How Modi Won India takes a look at that fascinating, developing, story.

You write in your book that Modi-Shah's ultimate goal is a modern Hindu India.
Who is the more strident Hindu nationalist -- Mr Modi or Mr Shah?

In the first tenure of Mr Modi, the aim was to build a Modi nation. In the second tenure the aim is to build a Hindu nation.

Amit Shah is much more of a here and now politician. He wants to build the narrative and has done that successfully in the last six months.

This is a very different government compared to the previous one. In the first six months they want to push their ideological agenda -- Article 370, triple talaq, possibly leading to a Uniform Civil Code, Ram Mandir, Citizenship Amendment Bill, all India NRC -- a much more muscular, in your face narrative with the idea of building a majoritarian society.

While Mr Modi is to some extent is conscious that as prime minister he wants to go down in history as not necessarily India's first overtly Hindu RSS pracharak prime minister, but as a world statesman and as someone who built the idea of India as a great nation.

That sense of greatness is how he positions himself. While Shah is much more about the Hindu Rashtra.

In his interjections during the SPG Amendment Bill, Mr Shah said that Mr Modi will not be entitled to SPG protection after 2025. Does that mean Mr Modi will retire from politics? Is that a real possibility?

I don't want to crystal ball gaze whether he will retire at 75 since he asked others to do so. I will be surprised if that happens, but Modi has surprised us in various ways in the past. The answer is I don't know.

We don't know what tomorrow brings with Modi-Shah. They are astute, ruthless, practitioners of realpolitik.

Modi sees himself as a man of destiny. I don't think he will ever retire from politics at 75 and go to an ashram. He is too much of a political animal.

It is very much the Putin-Russian model. He may resurface, not as prime minister, but as President for life. Who knows?

Who do you think is Modi's successor -- Amit Shah or Yogi Adityanath?

L K Advani and Atal Bihari Vajpayee were contrasted as the hardliner and the moderate. Then along came Modi and suddenly Advani looks moderate, then come Shah and Yogi -- and Modi starts looking moderate.

Who would have thought 20 years ago that Narendra Modi will be the most powerful BJP leader?

In the late '90s there were a lot of talented politicians -- Sushma Swaraj and Pramod Mahajan to name just two, but Mr Modi topped them all and is now in another league.

There is a core 15% BJP vote that might want Yogi Adityanath. Amit Shah at the moment is the second most powerful person in government. It much depends on the pushback that takes place.

In this country I have learnt never to predict.

Who would have thought there would be a Shiv Sena chief minister supported by NCP-Congress?

I hesitate to predict the future, but I do believe that Amit Shah and Yogi Adityanath will be very much around in our politics.

The Opposition figures pushing back are in their 70s -- Sharad Pawar, Bhupender Singh Hooda, Sonia Gandhi. Where are the young challengers to Mr Modi?

In 2014, the main reason for propelling him to power was the anger against the Congress government. People were looking for a saviour and along came Modi.

2019 was a pro-incumbency vote shaped as Modi vs who?

The younger generation unfortunately is unable to throw up leaders at least within the national parties. The Congress remains a family party.

The rooted regional leaders in the states have a better chance because they have a better understanding of their states and have certain loyalties.

But what is young? I asked Sharad Pawar that at 79 was he still in a position to fight and he said, 'abhi toh main jawan hoon.'

In Indian politics the notion of youth should not be taken seriously. We are a young country who like old leaders.

There is a crisis of Opposition. They do not have a credible enough leader to challenge Mr Modi. I don't see anyone emerging either.

With no opposition in sight, how long do you think the BJP will govern India?

Amit Shah says for another 30 years. Of the 724 districts in India they have already started building offices in 500, 600 districts.

The BJP is thinking long term.

The Congress is thinking about the next month.

Sharad Pawar is thinking about the next week.

The BJP is here to stay.

The BJP is the dominant national party of today and the Congress is on the decline.

In a state election there is a chance of toppling the BJP, but in the national election the BJP is a dominant force.

The BJP is organised, focussed and a machine. You write about the fear factor and how many people refused to speak on record for your book. Rahul Bajaj was assailed on social media when he spoke about the climate of fear.
Where is this fear coming from? Is it for real or only on social media?

I don't want to exaggerate the fear factor and I don't want to minimise it either. Far too many industrialists and people in power tell me that they can't speak freely to the government, not just Rahul Bajaj.

You can argue that industrialists in particular only worship 'ugta suraj (rising sun)'. Whether the Congress or BJP, industrialists gave every budget 9/10 or 10/10.

The fear factor exists to the extent that within my own media community the willingness to challenge the government like when they fudge economic figures will see an odd editorial or TV debate, but not a sustained campaign.

Whether it is fear or self-censorship can be argued.

Minorities remain fearful. Some of those fears may be based on the misconceptions of the past, but some are genuine and real.

There is a sense in certain states that we are already a majoritarian India and Muslims can live, but by the rules set by the majority.

India is not overnight going to turn into an authoritarian country with a Gestapo, but we have seen Whatsapp privacy rules being breached and no explanation given as to who did it.

We have seen people being called urban Naxals and put into jails without any attempt to actually tell us what is the nature of the crime.

Journalists have been told to leave their organisations because the government did not like what they wrote.

On social media, an attempt is made to target people with an alternate view.

The element of 'Us vs Them' is being created more sharply and there is a creeping sense of fear that if you don't do this then this will happen.

I don't want to exaggerate it, but I refuse to accept that it isn't there. It is there.

I cite an incident in my book where someone put a poster of Sanjay Joshi, an old rival of Mr Modi. wishing him a happy birthday. He was removed from his post. So the PMO is keeping a watch on who is putting what poster.

Ashok Lavasa, who passed a dissent note against the government, is being investigated along with his whole family. What is the messaging going out? Another example is Teesta Setalvad.

Archana Masih is a keen observer of national politics. She first interviewed Narendra Modi in 1998.
She can be contacted at archana_masih@rediffmail.com