November 8 will mark three years after demonetisation.
A K Bhattacharya reveals for the first time how the prime minister and the RBI worked together for months before Modi's 8 pm speech.
A riveting excerpt from The Rise Of Goliath: Twelve Disruptions That Changed India. 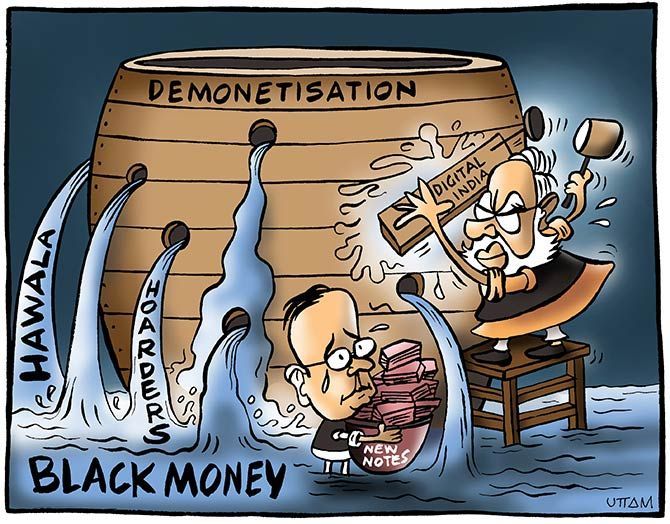 Of all the various portfolios Rama Subramaniam Gandhi handled as Reserve Bank of India deputy governor, the one pertaining to currency management will remain deeply etched in his mind.

Not without reason. In February 2016, Gandhi was summoned by RBI Governor Raghuram G Rajan and asked to assist the government in examining the pros and cons of a move to demonetise high-denomination currencies in the system.

It was a top-secret assignment. Nobody in the RBI system apart from Gandhi and Rajan knew of the plan.

A note had also been prepared by Rajan on what the short-term and medium-term consequences would be if all high-denomination currencies were to be declared invalid and what preparations needed to be made if the government still went ahead with the proposed demonetisation.

Like Rajan, Gandhi too was not comfortable with the idea of such a disruptive measure, even though the problem of counterfeit currency was getting worse, though its incidence was a very tiny proportion of all the high denomination currency notes in circulation at that time.

But the solution for that was not demonetisation, but a more concerted attack on fake currencies and bringing in new currency notes with better designs and more robust security features. 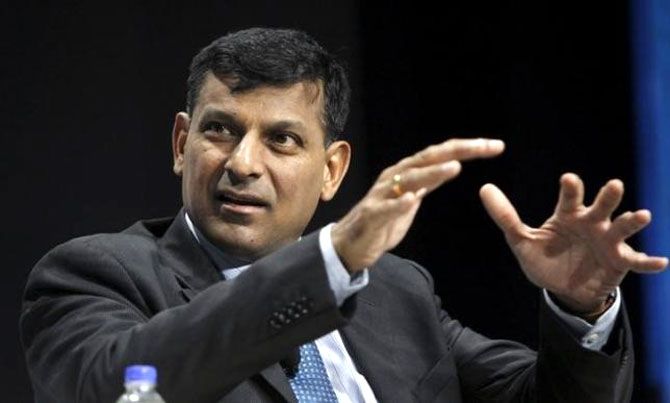 Gandhi was in charge of the entire operations from the RBI's side. The procedures were elaborate and followed while maintaining utmost secrecy.

As many as 18 designers worked on the new currency notes at the Mysuru currency printing press of the RBI and they took about 45 days to complete the design work.

An official at the RBI printing press at Mysuru would travel to the PMO in New Delhi and get the designs approved. In a digital age, no e-mails or postal correspondence was undertaken. Instead, all the processes followed a physical drill, in a bid to ensure secrecy. By May 2016, the matter was referred to the RBI board, which then cleared the introduction of currency notes with a value of Rs 2,000.

In June, the printing presses at Mysuru and Salboni in West Bengal were told to undertake no more fresh printing of currency notes of Rs 1,000 and Rs 500 value.

This was probably the most significant pointer that the government had by then decided about its demonetisation plan.

Rajan was at the helm of the RBI at that point in time. While Gandhi implemented that decision and got a clear sense of the government plan, Rajan too must have realised by then that demonetisation was in the offing.

On June 18, 2016, Rajan announced his decision to return to academia and not continue as RBI governor beyond the completion of his three-year tenure on September 4, 2016. 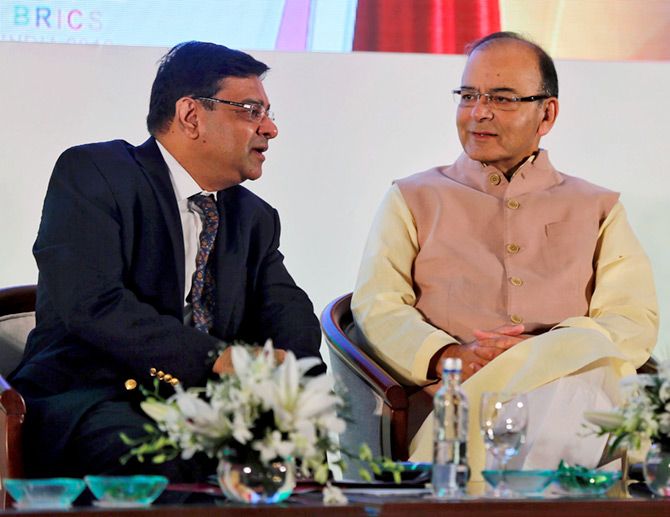 Urjit Patel had become the RBI governor. And the new notes thus bore the signature of Patel.

The challenge of maintaining secrecy over the currency note exercise was proving to be formidable. A report in Dainik Jagran on October 28 seemed to have revealed it all about a fortnight before the decision on demonetisation was made public.

Brijesh Dubey, a business journalist based in Kanpur, wrote that the government was likely to soon issue new currency notes of Rs 2,000 value with high-security features to curb black money.

The report also said that in a bid to curb fake currencies, a serious view was being taken on the existing currency notes of Rs 500 and Rs 1,000 value.

It was significant that the board of the RBI under its new governor, Urjit Patel, held its meeting at Kanpur on October 20.

On October 30, a Sunday, Diwali was celebrated across the country. The government weighed the pros and cons of advancing the decision on demonetisation to pre-empt further leakage of information. Eventually, it opted for November 8, 2016 to be the big day. For Gandhi, November 8, 2018 was not an ordinary working day. He had come to Delhi by the morning flight to attend a meeting of the RBI board to be held the same afternoon. Gandhi placed before the board a memorandum from the RBI's department of currency management.

The speculation and suspense over why a board meeting had been convened got over. Gandhi's memorandum recommended the 'withdrawal of the legal-tender status of bank notes in the denomination of Rs 500 and Rs 1,000 of existing and any older series in circulation'.

There is no documentary evidence on who all among the RBI directors responded to the memorandum that was put up for the Board's recommendation. But some of those observations suggested that the memorandum did not have an easy passage at the Board meeting.

Three critical observations, which were recorded in the Board meeting's minutes, deserve to be recounted here:

The growth rate of the economy mentioned is the real rate while the growth in currency in circulation is nominal. Adjusted for inflation, the difference may not be so stark. Hence, this argument does not adequately support the recommendation.

While any incidence of counterfeiting is a concern, Rs 400 crore as a percentage of the total quantum of currency in circulation in the country is not very significant.

Most of the black money is held not in the form of cash but in the form of real-sector assets such as gold or real-estate and that this move would not have a material impact on those assets. The RBI management was extremely reluctant to make public the minutes of the meeting of its central board. For months together, requests for releasing these minutes made under the Right to Information Act were turned down. It was only under the directives of the Chief Information Commissioner under the RTI Act that the RBI released those minutes in March 2019.

What these minutes clearly show is that the decision on recommending demonetisation was not an easy and smooth affair. Serious concerns were expressed over the impact and hardships that demonetisation would create.

The directors seemed to have recognised the inevitability of the decision on demonetisation, but spared no efforts in seeking as much assurance as possible to help mitigate the adverse impact of annulling 86 per cent of the country's total currency in circulation.

The minutes also established that the government and the RBI were in consultation with each other on the plan for demonetization for about six months.

A puzzling development during the Board meeting was the presentation of a finance ministry letter dated November 7, 2016. It is not clear what the contents of this letter were. The RBI Act clearly mentions that the government can annul currency notes of any denomination on the recommendation of the RBI's central board of directors. What was the finance ministry letter doing in that board meeting?

Under what sections of the RBI Act was that letter written and sent?

There is no clarity on this as yet.

Was the RBI board being guided by the finance ministry to recommend the declaration of high-denomination currency notes invalid? Such questions must have troubled many of the board members on that day.

The meeting began at 5.30 pm on November 8, 2016. Going by the minutes of the meeting, the meeting could not have lasted very long. But it was not an easy meeting for the RBI board to hold.

The board had been advised by the government to consider a proposal that some of its directors were not comfortable with. The resolution that was adopted and used to convey the RBI's recommendation for demonetisation put the ball in the court of the RBI.

Official records would show that it was, after all, a proposal of the RBI deputy governor that recommended demonetisation. The consent of the RBI board was communicated back to the government.

Having received the RBI recommendation, Prime Minister Modi held a Cabinet meeting to announce his plans and secure its approval before he started his address to the nation at about 8 p.m.

Modi's speech was telecast at 8 pm that evening. But it had been recorded earlier in the day before the Cabinet meeting began.

It was a short meeting. There was hardly any discussion. The ministers, who attended the meeting, had to deposit their mobile phones with security before entering the conference room. For most ministers, the move was like a bolt from the blue.

Excerpted from The Rise Of Goliath: Twelve Disruptions That Changed India by A K Bhattacharya, with the kind permission of the publishers, Penguin Random House India.

A K BHATTACHARYA
SHARE THIS STORY
Print this article