News
Business
Movies
Sports
Cricket
Get Ahead
Money Tips
Shopping
Sign in  |  Create a Rediffmail account
Rediff.com  » News » 'Congress will be a very distant third in UP' IMAGE: Priyanka Gandhi, Congress general secretary for Eastern Uttar Pradesh, undertook a three day boat yatra from Prayagraj to Varanasi this week to garner support for the Congress which only has 2 of the 80 Lok Sabha seats in UP. The seats are held by her mother Sonia Gandhi and brother Rahul. Pawan Kumar/Reuters

Since his arrival in India in 2005, Gilles Verniers -- assistant professor of political science at Ashoka University and co-director of the Trivedi Centre for Political Data -- has been a keen observer, researcher and writer on Indian politics.

Two of his recent publications explore studies in Indian politics and the transformation of the Samajwadi Party.

"The Congress can either concentrate on its revival in UP or it adopts a strategy to defeat the BJP by not getting in the way of the other parties who stand a better chance of winning. The Congress is trying to do both, but it probably is going to get neither," Dr Verniers tells Rediff.com's Archana Masih in the first part of an interview on electoral politics in UP, which sends 80 MPs to the Lok Sabha.

During her boat yatra, Priyanka Gandhi went to temples, met students, spoke to people on the riverbank -- what difference do you think she is making on the ground in UP?

First, we have to question the assumption that individual leaders can have a large mobilisation, especially parties that suffer from a deteriorated organisation.

Behind that image, leaders need to have an organisation that is at work.

The question is not the personal appeal of Priyanka Gandhi, but what is the organisational backbone behind her campaign.

In the case of the Congress that is really under question.

If she wants to boost the chances of the party in places where she is campaigning, she will have to revive the organisation on the ground for which her presence is necessary.

That poses another question: Whether you contest elections to build party capacity or should you build capacity first in order to be competitive in an election?

Here, the Congress has put the cart before the horse.

She has campaigned in past elections, but is playing an active role this time around. Will that boost the Congress's prospects?

In UP, she is already a familiar face. She was part of previous campaignsm maybe in a less prominent role.

She has been caretaker of the family's constituencies for a long time. Her face was on the billboards of the party's communication.

What has really changed is one announcement made in Delhi that sort of formalised that she is in politics, but in reality she already was.

She was involved in the campaign before and the party fared badly, so why should there necessarily be a strong effect now? IMAGE: Priyanka interacts with a young girl during her campaign in Prayagraj. Photograph: PTI Photo

People draw comparisions to the resemblance between Indira Gandhi and Priyanka. Do you see any resemblance?

Whether she will reproduce her grandmother's style of doing politics -- centralised and authoritarian.

Though I understand that there is a nostalgia about a centralised, authoritative, figure in the Congress party, but does India need an alternative authoritarian figure at the moment?

The Congress is playing on her image which is only a perceptional image, the reality is that we really don't know Ms Priyanka Gandhi very well.

People endow her with qualities she has not had the opportunity to actually display. A lot of the image built around her also stems from the fact that unlike her brother she remains shrouded in mystery.

She never had the front stage exposure and because she is shrouded in mystery people endow her with all sorts of qualities she has not yet had opportunity to demonstrate or prove.

Uma Bharti referred to her as Mrs Robert Vadra and the enforcement directorate has requested for Robert's custodial interrogation even though his bail has been extended till March 25.
Will her husband's image pull her campaign down, if not now, but in time to come?

At the same time, it is perfectly distasteful to subsume a woman politician to be an extension of her husband. It is fundamentally unfair and discourteous and actually sad when it comes from another woman politician.

The Congress base in UP is very low, its organisation is weak like you pointed out.
Is there more hype than substance in the way the party is projecting Priyanka in its campaign in the most politically important state?

They have nothing else to show for the party in that particular state. She will get them publicity and send out a positive message.

It gives her an opportunity to express positive ideas, but publicity may not necessarily translate into votes.

To be competitive in an election you need more than leadership and publicity space -- you need resources, organisation and people to make significant donations to parties.

You need cold calculations about who stands a better chance of winning.

It is very clear in UP, the Congress is going to be a very distant third.

The Congress party can either concentrate on its revival, organisation building -- basically try to raise its position a little bit in UP -- or it adopts a strategy to defeat the BJP by not getting in the way of the other parties or candidates who stand a better chance of winning.

The Congress is trying to do both, but it probably is going to get neither.

Even if Mrs Priyanka Gandhi has a boosting effect on the Congress, it won't help the Congress go beyond expected results.

She can have a mobilisation effect, but the question is to what end?

A combined BSP-SP-Congress alliance had the potential of reducing the BJP's seats by 50 -- what do you see as the reason for the Congress inability to strike alliances. The BJP is always beating them in this game.

Quite frankly, it is a mystery because it makes no tactical, strategic, sense to go alone in UP.

My sense is that the Congress is too concerned with maximising its gains at the cost of making concessions and leaving space for other parties to maximise chances of defeating the BJP.

Once again, it is going to undermine its other objective of defeating the BJP.

The good results they have scored in recent state elections has given them the illusion that they are on the path to revival.

They do not understand that to maximise gains, you have to accept concessions, make a few losses and basically share political space.

By going alone they basically are sabotaging their own campaign.

Akhilesh Yadav has said the Congress should learn to respect other parties.

It also is sending out the wrong signals if the Congress hopes to be the centre of a future coalition.

Why would anyone want to work with a party which refuses to even discuss pre-poll alliances seriously? 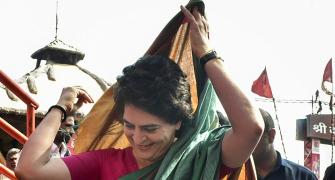