News
Business
Movies
Sports
Cricket
Get Ahead
Money Tips
Shopping
Sign in  |  Create a Rediffmail account
Rediff.com  » News » 'Modi seems to have got his mojo back'

'Balakot and Pulwama will definitely help the BJP, but it will still not help them to create a 2014 like situation or go beyond that.' 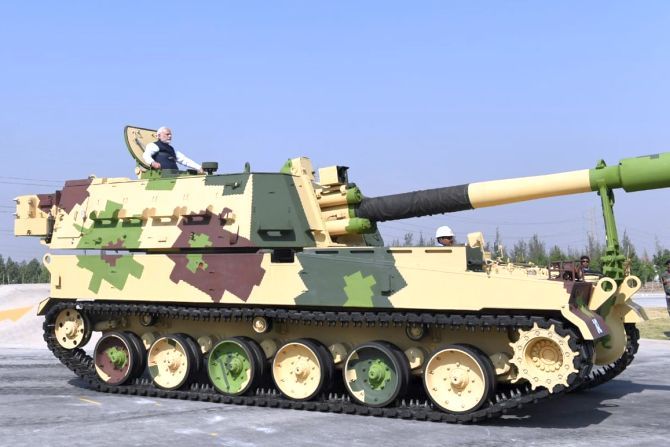 Pulwama, Balakot and an aggressive stance on terror will be the main platform for Prime Minister Narendra Damodardas Modi's campaign.

The Congress, on the other hand, will have to work a lot harder to be back in the game -- and shift focus from the national security crisis to economic concerns.

"Modi is again trying to present himself as an Opposition while being in government. Pulwama and Balakot have given him the opportunity to use his aggressive style of campaigning," says Rahul Verma, psephologist and co-author of Ideology & Identity -- The Changing Party Systems of India.

Verma is currently a fellow at the Centre for Policy Research in New Delhi and is also pursuing a PhD in political science at the University of California at Berkeley.

"In the two months since winning the December state elections, the Congress did not do anything extraordinary. To challenge a leader like Narendra Modi or Indira Gandhi you need to do extraordinary things," Verma tells Rediff.com's Archana Masih.

What impact will Balakot have on the BJP's electoral prospects? Is this going to be the first election to be fought on national security?

To say that Balakot is the turning point of the 2019 election would be an exaggeration, but it will definitely have an impact.

It is not the first time that there has been an important national security issue around an election.

The time leading to the 1971 War was a national security crisis moment (The general election for the 5th Lok Sabha was held in March 1971).

In the 1999 election, there is some evidence to suggest that Kargil helped the BJP. The party contested 40 to 45 fewer seats, but its vote share remained similar to 1998.

After the three state elections in December 2018, the BJP seemed down, but since January 2019 it seems to be holding the narrative with reservations for the economically backward, cash transfers for farmers and Pulwama and Balakot.

Across the world it is seen that a national security crisis generally helps the incumbent, especially of the right wing variety.

National security is an issue where right wingers have leverage.

Balakot and Pulwama will definitely help the BJP, but it will still not help them to create a 2014 like situation or go beyond that.

Unlike some, you don't feel this has gifted BJP a victory?

With Pulwama and Balakot, the BJP is in position of controlling the narrative.

The Opposition -- post Pulwama-Balakot -- will have to work a lot harder to be back in the game. They have to shift the focus from the national security crisis to economic concerns, farmer distress.

In 2014, he was the candidate for the largest Opposition Party. His campaign and speech style was like an insurgent campaigner against the establishment. He built up a campaign to challenge the Congress very effectively.

By 2018, Prime Minister Modi and BJP were losing steam because of the economy and farmer distress. His speeches were getting repetitive, but since January 2019, the BJP regained its position in steering the political discourse.

Prime Minister Modi also seems to have got his mojo back in the aftermath of the Pulwama crisis.

He is again trying to present himself as an Opposition while being in the government.

Pulwama and Balakot have given him the opportunity to use his aggressive style of campaigning in a situation which now favours PM Modi.

And Balakot and Pulwama will be a part of all his campaign speeches.

Not part, they will be the main platform. All developmental activities will also be seen through the prism of nationalism.

They might say if there was no nation what would we do with infrastructure.

National security will not determine the election, but it will be an important factor.

Even before Pulwama and the air strikes on Balakot, you had argued that the BJP's position wasn't bad either?

Some would argue that BJP was completely out of the race after losing the December assembly elections.

They were making assumptions that the BJP is going to lose 100 odd seats in the Hindi belt -- that they would be below 200 and there would be no BJP government or at best a BJP government without Modi.

I feel that is an oversimplification of what will happen in UP or the Hindi heartland.

I feel the game is wide open in UP. The BJP is likely to lose seats, but not to the effect that people are expecting.

How is this election going to be different from elections of the past?

Last time there were 9 phases, but it was like a 7-phase election because if you look at the schedule -- there were just 5 to 10 seats in two phases.

Last time, the BJP's campaign began much earlier. They were in the Opposition building up to a large Modi wave -- we could see that happening from July 2013 to May 2014.

It seemed like a year long campaign for the BJP.

There were new elements shaping up the 2014 election like the India Against Corruption movement that started in 2011, the creation of the Aam Aadmi Party and rise of the BJP.

The emergence of new leaders or activists marching up to Delhi is not there this time.

This will also be an election contested on the social media platform.

A lot will happen on Facebook, WhatsApp, Twitter -- these may not shape the voting of a large Indian population, but will definitely shape the narrative.

And here the BJP is certainly ahead of any other party.

Do you think Rahul Gandhi's big mistake is attacking Modi on Rafale and will not get him any electoral gain?

I will not blame Rahul Gandhi or the Congress for this. There are moments in the political system when you don't know what exactly needs to be done.

Electoral considerations aside, as the Opposition, the Congress is justified in bringing these issues in front of the people.

The Congress was not doing anything wrong, but the problem was they were only doing that.

They were only talking about Rafale, but what were they doing about farm distress? Agrarian crisis? Were they mobilising farmers across the country? Were they raising citizens's issues?

Between winning the 3 state elections and Pulwama -- in these two months -- Rahul Gandhi and the Congress party did not do anything extraordinary.

If you need to challenge a leader like Narendra (Damodardas) Modi or Indira Gandhi, you need to do extraordinary things.

With Pulwama and Balakot, it has become much harder for them.

The BJP swept the most electorally important state of UP. How disruptive is the SP-BSP alliance going to be for the BJP?

The game in UP is and was wide open in spite of the SP-BSP alliance. They will certainly bring down the BJP's tally from 73, but whether the BJP retains 50 or 20 odd seats depends on the mobilisation the SP-BSP can bring on the ground.

It is hard because the SP-BSP have fought each other for 20 years. The alliance and the BJP may get almost seats in equal proportion.

Without Priyanka Gandhi and Jyotiraditya Scindia, the Congress would not even have been part of the conversation in UP.

The euphoria about Priyanka was lost in the fog of war. Has she been unable to create the bang that Congress had intended?

I don't know why she was expected to create a bang. She was campaigning in these two constituencies for the last 4 or 5 elections.

The Congress base is so low in UP that she cannot make much difference because they do not have an organisation on the ground.

If the Congress wanted a Priyanka effect, she should have taken charge after the UP assembly election.

Any leader needs time to build structures on the ground. Even if she has an impact on the ground it won't be visible because it will be very low.

What are the most crucial states, the most nail biting contests in this election?

The pattern over the past years shows that the party that performs better in the large 5 or 6 states -- UP, West Bengal, Maharashtra, Tamil Nadu, undivided Andhra -- is far ahead in the game.

The Hindi heartland is important for the BJP because it swept with 201/220 seats.

The BJP is not going to gain much from the west, east and south.

If they lose 50 odd seats in UP, they are in trouble.

If they lose 20 to 25 seats they would be in striking distance of a majority.

Why is the general election such a long drawn process? The Election Commission does a fine job of conducting the world's largest poll exercise. I am sure it has the capacity to do so in a shorter time,

The Election Commission has the capacity to conduct elections in a shorter time, but the point is whether we want a polling process that is long but credible or do we want a quick election with some glitches?

The Opposition is raising questions that the 7 phases will benefit the BJP in crucial states.

There is no evidence to show that a phased election favours any particular party.

Secondly, by now the Election Commission of India has enough credibility that it does not favour the government of the day.